Ventoux was devised by the 2Magpies Theatre which was formed by Tom Barnes and Matt Wilks whilst they were studying for their master’s degrees in International Security and Terrorism in 2012. The play is acted by Alexander Gatehouse (Lance Armstrong) who is a lifelong cyclist and Matthew Seager (Marco Pantani) who has worked with the cycling Shakespeare Company The Handlebards.

As we walk into the Theatre the actors are already in character warming up on their bikes, eating fruit and bananas and playing psychological mind games with each other. The staging is simple. A screen at the back of the stage brings mountain footage to the fore as this footage was shot on Mount Ventoux in September 2014 by the team. The only other props on stage are three cool boxes which are used by the bikers for elevation when lifting their bikes for climbing the mountain scenes; a bottle of booze and some white powder which we assume is a drug of some description. The bikes are well used during the show with both actors looking the part very much with a biker’s physique.

The essence of the play surrounds the controversy of drug taking in competitive biking in the 1990’s. The pressure the bikers were under to perform well for their sponsors and their own real need to win. 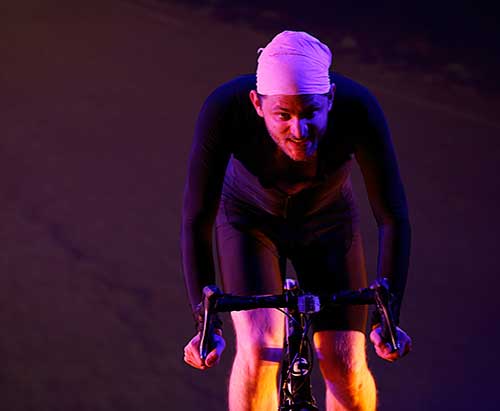 We are given some background on Armstrong and Pantani.

Armstrong began his sporting journey when he was a young competitive swimmer and progressed to triathlons. As a Texan he was used to cycling on the flat and found that the flat windy conditions in Texas were good for training.

Pantani grew up in the Italian Mountains and loved the climbing and descents, he was obsessed with his bike and used to bring it into the house once everyone was in bed when he was young and wash it in the bath.

Following an accident in 1995 when Pantani was hit by a car and sustained a leg injury he was not able to compete again until 1997, when he stood on the winners’ podium of the Tour De France. He was nicknamed the Pirate because of his bandana! In 1998 he won the Tour De France and the Giro D’Italia in the same year, a feat which has still not been equalled to this day.

In 1999 Pantani did not compete as he was branded a drug cheat, and this was the year that Armstrong won the race after defeating cancer.

The play mainly concentrates on the year 2000, when they competed against each other in the Tour De France and what is regarded as the hardest stage of the tour, Stage 12, the momentous climb up Mount Ventoux. As quoted by Roland Barthes ‘The Ventoux is a God of Evil, to which sacrifices must be made. It never forgives weakness and extracts an unfair tribute of suffering’.

The play clearly shows the dedication and suffering both cyclists endured to get to this level of performance and asks the question, should the sport be asking so much of these athletes? Surely if doping is used then we are asking them to go beyond their physical capability!

I must applaud the 2Magpies Theatre for being able to take a bike race and turn it into interesting Theatre! The actors play their roles superbly and their fitness does them credit.

The play is current touring and dates can be found on their website. https://www.2magpiestheatre.co.uk/tour-dates.php