The Great Gatsby - The Lowry

The Great Gatsby: F Scott Fitzgerald’s classic novel about love, passion and the inevitable ensuing tragedy, set in the decadent 1920s: tonight performed by Northern Ballet who produced a wonderful, luxurious feast for the eyes.

The story is about the love affair between Gatsby and Daisy Buchanan, his first true love who he thought was lost to him.

I have previously never been particularly won over by ballet as I have found it to be rather starchy and exclusive. However, from the moment the curtain went up tonight, I was transfixed and enjoyed every single second.   I think tonight may have converted me.

All the dancers are absolutely outstanding.   To be able to tell a story so beautifully without using speech is a demanding task but they skilfully portrayed every single nuance and emotion impeccably and with great acting. They make it all look so effortless. They are so in tune with the music, they appear to channel it through their flowing, silken movements. It is like watching perfection in motion. 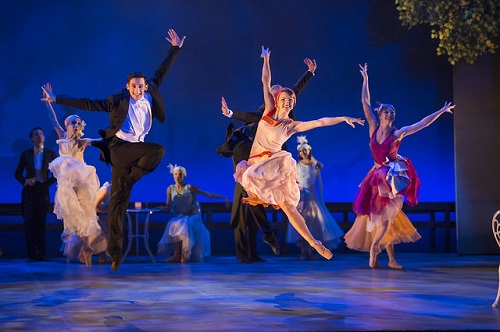 From beginning to end, the choreography is spellbinding and inspired.   It demands and holds your attention with its fluidity and exquisite movements. There is an infusion of ballroom dancing into some of the choreography which was beautiful to see – I particularly enjoyed the party scene where there were elements of Tango incorporated, it was intriguing and simply fascinating to watch.

The music which was chosen to accompany the performance could not have been better. I was completely hooked straight away by the introductory music from ‘Murder on the Orient Express’ but the whole score was well placed and perfect for this production.   The orchestra were magnificent and conveyed the atmosphere superbly.   There is increasing tension in Act Two as we approach the climax to the story – quite a contrast to the fun and frivolity of Act One. The music helped us with this by becoming increasingly dramatic: I felt quite on edge!   The dancers used stillness at certain points to convey the tension and this worked extremely well, there was on overall sense of impending doom.

Every scene had moments of greatness but the stand out scenes for me were the party scenes and the group scenes involving all male dancers.   The timing and synchronicity of the latter almost defies belief and is amazing to see.   The party scenes were fun, frivolous and conveyed the decadence and carefree attitude of the time with magnificent group dancing.

The set wasn’t overly intricate but its simplicity was very effective, enhanced by the wonderful lighting which was used impressively to convey mood and emotion, as well as providing dramatic effects. At some points I was put in mind of a black and white film before swiftly being immersed into a colourful decadent tableau.

Praise must also go to the costumes which were beautiful.

This production to me felt much more accessible and immediate than ballet usually is.   I felt completely immersed in what was happening on stage and I didn’t want it to end.

High praise needs to go to David Nixon OBE: the Artistic Director and Choreographer. Both choreography and direction are outstanding and he has created a piece of magic with this production.   It is an elegant, sumptuous visual spectacle from start to finish.