Under Three Moons - The Lowry

Mike and Paul have been friends since they were in school. Life has not been easy for either of them, although their friendship has endured. But what does that friendship look like? Where did it start? How has it grown and changed as the boys have grown into men?

Daniel Kanaber’s excellent script provides us with three snapshots of their relationship spanning three decades – from boyhood, through manhood, to fatherhood. You might say that this is a quiet play in which not very much happens, but that’s not really true. Life happens. The boys grow up, they experience joy and loss, and we share in their laughter and their pain. 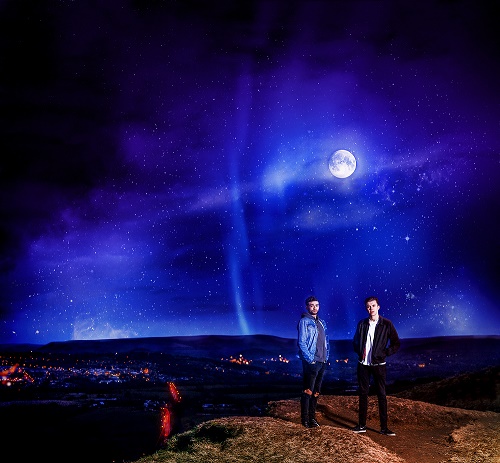 But it is also what is not said that matters.

This play encourages you to consider what it really looks and sounds like when men need to talk but don’t always know how. It also left me thinking about male self-esteem and mental health, and about how men judge success and judge one another; and that conversation continued all the way home.

The set, designed by Katie Scott, was simple but effective, cleverly illuminated by the moon from the title and ever-changing stars. The fluid movement of the transitions between the three scenes was also very interesting and kept the audience engaged throughout.

Darren Kuppan and Kyle Rowe excelled in this production. There is nowhere to hide when there are just two actors on stage, and there was no let up in the dialogue or the emotion. I was extremely impressed by their genuine awkwardness and tender vulnerability, and by the way they sustained their energy and their characters for the duration of the play. The cast and creatives had also worked hard to explore the different physical elements they could use to show the ageing process; it wasn’t just about clothes, but also about vocabulary, accent and mannerisms.

This play is an extraordinary and thought-provoking look at a subject that is often ignored. It is beautifully acted and has a great balance of honesty and avoidance, humour and seriousness. I encourage you to go and see it!

Under Three Moons is the latest production by the Manchester-based theatre company Box of Tricks (https://twitter.com/bottc). It plays at The Lowry, Salford Quays, until Saturday 28th September: https://thelowry.com/whats-on/under-three-moons/ It then continues around the north of England and Wales until Saturday 2 November. Information and ticket links can be found here: https://boxoftrickstheatre.co.uk/production/under-three-moons/

Please take note of the age recommendation of 14+ owing to the use of language and the subject matter.