Ground Zero is a play by writer/artist/creative Nathan Birkinshaw. It features five young actors (Marcella Hazel, Natasha Burgess, Gemma Whiteley, Frederica Davies and the single male, Macauley Cooper) none of whom leave the stage at any point. It is experimental theatre and tackles real world issues. A LOT of real world issues.

It opens with lengthy voice overs of real people with real lives and real opinions, talking about their experiences on zero hours contracts and how difficult it is to make ends meet, often having to hold down several jobs. It’s heavy stuff. It’s also not visual and it went on for too long. 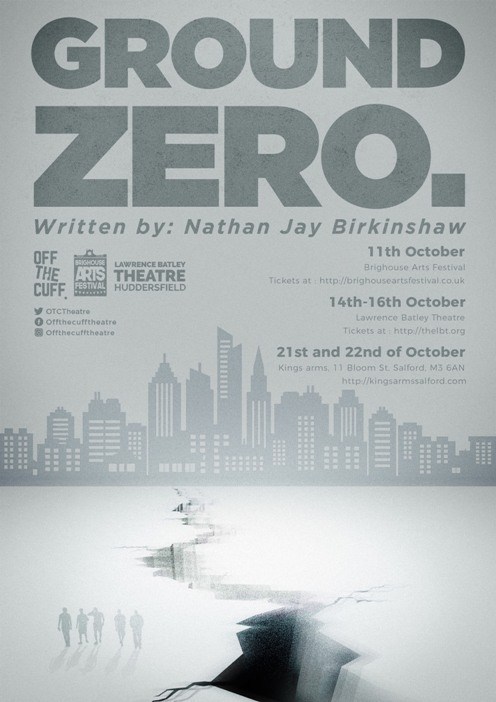 When the play properly begins, the cast perform a kaleidoscope of sub-vignettes about the difficulties of living in the modern world, the pressures, the hopelessness, the depression, it's a rather busy melting pot of issues and it often comes across as unfocused and random, as though the writer is just moaning about everything in life that he doesn’t like. However, there isn't one opinion that I didn't share, everything from veganism, to the treatment of workers, the attitude of medical professionals to mental health, the prevalence of reality TV (and how the sob story is more important than the talent). It’s all about the politics, very sound politics, but it is sometimes quite indigestible. It’s unsubtle: it shouts at you rather than let you make up your own mind. It’s cluttered, frenetic and it runs the risk of overloading the audience. However, there are some funny moments and some rapid-fire one liners which got a good reaction.

It only lasts an hour, which was long enough for this type of show. It ends with a humorous voiceover for each person, revealing how their lives pan out, which includes one being imminently run over and killed and one in prison for drink driving and killing a pedestrian.

The cast all pitched very strong performances. I loved their acting. I loved their enthusiasm. It was a brave choice to put on such a challenging piece of theatre. It’s good to be challenged sometimes and this show will make you think. It’s not for everyone, but its heart is in the right place.