Nigel Slater's autobiographical work Toast was first adapted in 2010 and was broadcast on BBC One. Then in 2018, The Lowry commissioned a stage adaptation of Toast written by Henry Filloux-Bennett and directed and choreographed by Jonnie Riordan. After a sell-out run at the Week 53 Festival, it was transferred to the Traverse Theatre at Edinburgh Festival Fringe. Toast has now embarked on a UK National Tour and return to the Lowry tonight for its opening night of a week showing.

On entering the Lowry’s Quay side theatre the smell of ‘on-the-brink-of-burned’ toast was wafting through the auditorium enveloping the audience in the comfort and nostalgia of our own kitchens and breakfast smells, setting the perfect atmosphere for tonight’s foody performance.

Toast is based on the memoirs of the acclaimed British food writer Nigel Slater born in Wolverhampton, in 1958, to factory owner Tony Slater (Blair Plant) and housewife Kathleen (Katy Federman). The play recounts Nigel’s childhood from ages nine to sixteen, through stories of the food that shaped him. Slater became known to a wider audience with the publication of his autobiography in 2004 that became a best-seller after it was featured on the Richard & Judy Book Club. Toast: The Story of a Boy's Hunger is a moving autobiography focused on Nigel’s love of food, his childhood, his family relationships and his burgeoning homosexuality. 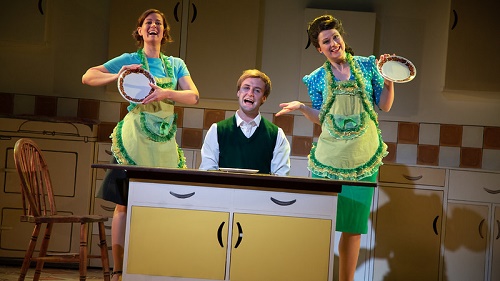 We are first introduced to Nigel (Giles Cooper) as a nine-year-old boy, who finds joy in his family kitchen, reading the Marguerite Patten cookbook, growing radishes and discovering the mystifying dish of spaghetti Bolognese for the first time. His greatest love and pastime though is baking with his beloved mother (Katy Federman).

Giles Cooper does a superb job of playing a nine-year-old, leading the audience through the story with his energetic first-person narration. He conveys a child’s curiosity, need for attention (from his mother and from the audience) and is eccentric in the way that small boys often are, keeping a pocketbook of lists of things like smells and table manners.

The story is told largely through Nigel's encounters with different food dishes over the years ranging from burnt toast, Angel Delight to lemon meringue pie. We learn of the closeness with his mother, and the tragedy that struck his family when his mother died of asthma when Nigel was only 9 years old, and then his father's new relationship with 'Aunt Joan' the family’s cleaning lady. Nigel goes on to use food to compete with his stepmother (Samantha Hopkins) for his father's attention, with their biggest battle being over lemon meringue pie with Joan refusing to divulge her recipe.

Giles Cooper is supported on stage by an extremely talented cast of 4, who each take on multiple different roles as characters from Nigel's past. Katy Federman was truly outstanding tonight in her role as Nigel's mother, creating tear-jerking scenes of motherly love while preparing mince pies and Christmas cake, and teaching her son to dance. Then In the next moment Federman had the audience roaring with laughter as Nigel's intense and slightly disturbing school cookery teacher.

Henry Filloux-Bennett’s play is full of warmth and humour, with dollops of nostalgia for a time of local butchers and old-fashioned sweet shops, making it an incredibly easy and entertaining watch. It is a wonderfully touching tribute to Nigel's relationship with his mother, as well as portraying the significance of food in his life as symbols of both love and war.

Credit to the production and creative teams of PW productions who staged a fabulously versatile set of a beautiful nostalgic sixties kitchen, complimented by the well selected 60’s soundtrack.

Toast is a delight to all the senses as it takes you through a rollercoaster of emotions, and tickles the taste-buds as at regular intervals the audiences is treated to sweets, flap jacks and even walnut whips, not to mention the wonderful smells of on stage cooking.

This is a magnificent piece of theatre and is perfect for food lovers like myself, as it has you longing for the play to go on for longer yet similarly has you wanting it to end so you can dash home and make a piece of toast.