How The Grinch Stole Christmas - The Lowry

Dr Seuss’ timeless classic; How The Grinch Stole Christmas has been adapted for the stage directed and conceived for the stage by Jack O’Brien and is currently touring the UK after a sell-out Broadway run currently at The Lowry Theatre in Salford Quays over the festive season.

It’s a production filled with festive frolics and fun from start to finish. Most will know the classic Dr Seuss tale; with the envious Grinch attempting to steal Christmas away from the inhabitants of Whosville accompanied by his dog; Max but this musical adaptation has even more charm and wit than the original book in my opinion and simply comes alive on stage.

The title role of the Iconic green character is played by Edward Baker Duly who delivers nothing short of a master class in physical comedy, Baker-Duly captures the character and mannerisms so well and becomes the perfect Grinch from the moment he steps on stage. I loved how Baker Duly managed to interact with the audience without it turning into a pantomime, teasing the audience with the opportunity to be involved. 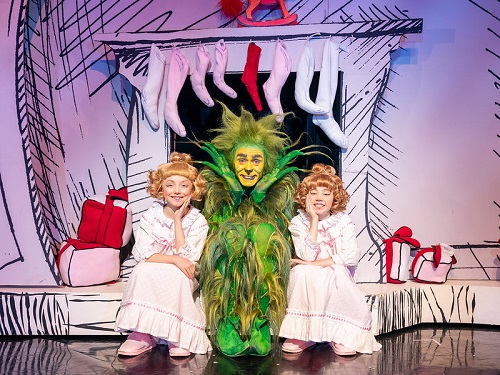 The larger than life character is joined by a stellar cast which includes TV’s Griff Rhys Jones who plays the role of Old Max while X factor’s Matt Terry plays Young Max - both deliver light hearted energetic performances. Rhys Jones has a personality on stage which is immediately likeable and seems to laugh along with the audience, While Terry has an unstoppable energy jumping and leaping around the stage, something he perhaps nurtured during his run in his other animal role in Madagascar the Musical earlier this year.

It was the youngest cast member that delivered one of the most memorable performances of the night; Isla Gie as Cindy Lou captured the heart of the audience with note perfect renditions and sounds of ‘how cute’ could be heard from the auditorium. Gie’s on-stage family; Karen Ascoe as ‘Grandma Who’, David Bardsley as ‘Grandpa Who’, Holly Dale Spencer as ‘Mama Who’ and Alan Pearson as ‘Papa Who’ are energetic throughout and give the show the fast kick that keeps this show interesting throughout along with the rest of the citizens of Whosville / ensemble who add the extra dazzle!

The staging look quite simplistic with hand drawn backdrops but it’s incredibly slick and there are countless moving parts which all work in sync; including a flying sleigh and a snow shower or two, you find your smile getting bigger and bigger as the show continues and the second half is delightful for both young and young at heart.

The music and lyrics by Mel Marvin and Timothy Mason are fun and inventive, performed by this talented cast and the orchestra which is located behind the stage led by Musical Director; Richard John. The score has pomp, vigour and yet still feels pleasantly festive.

I also enjoyed the subtle modern references thrown in for good measure with mentions of hashtags and Brexit referendums which amused the older audience members.

Verdict: ‘How the Grinch Stole Christmas’ will delight every member of your family in equal measure; it’s festive, fun & not to be missed.