As a lover of all kinds of theatre big and small, I was excited when the opportunity arose to see a small production called Women of Freedom Square.

I deliberately don’t read up on shows beforehand so as not to be biased with preconceptions and misconceptions, but from the name of the show, you can make an educated guess about its premise.

Far from being set in the early 1920s during the era of the Suffragettes as first thought, this play is a powerful exploration of oppressive patriarchy in modern-day Iran.

We hear stories about women of different ages, all imprisoned for mundane things like putting on a fashion show, trying to get into sports stadiums, and making a choice not to wear the hijab.

The production is minimalist in the extreme, focussing on realism over style: a bold (and wise) choice considering the emotive subject. However, the theatre lover in me wanted to see more in the way of theatricality interwoven into the show - better sound effects, better lighting and a better, more dynamic set. All this would have enhanced rather than detracted from the women and their powerful stories. 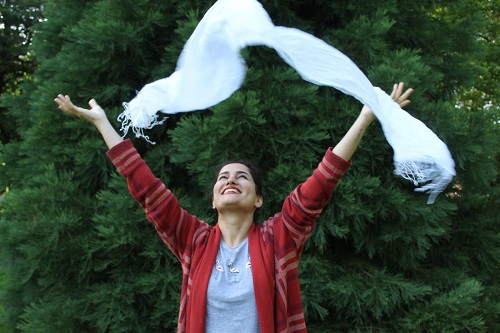 The cast - made up of five women and one solitary man from Sheba Arts - were good, albeit some better than others. The only white English cast member played a journalist who in some parts overacted substantially. I also thought she was portrayed as the show’s protagonist, the rich middle-class white journalist coming to report on women’s struggles in Iran.

In her role as the anchor between both characters and storyline, she is the one that gets the women to open up about their oppressive experiences. I thought this could have been done in a much better way than using a stereotypical binary character that goes against the message of Iranian women fighting their oppressors, when unfortunately so many of their oppressions come from the very culture that the well-to-do middle-class character represents.

Likewise, in a twist of unintentional irony, the only man in the production was supposed to represent “the invisible voice of the oppressive Iranian patriarchy” and not be seen onstage. However, from my seat I could clearly see him not even in the wings, reading from his script. This, for me, sums up the show - its heart was completely in the right place, but the show as a whole sadly missed the mark as a piece of theatre.

That said, the moment of real reflection and - for me - the bit that struck a chord with me the most was something I’ve never seen happen before in a show like this. After the cast had taken their bows, they came together on stage with the director for a Q&A with the audience.

Something one of the performers said in response to an audience member’s question will stay with me for a long time: “Pain is universal”. These are the powerful messages that the show was trying to get across. However, I felt it was lacking in all the major areas that are the hallmark of a good show - a clear storyline with a logical way to move the story on, a good set, and good stage management.

All in all - lots of potential, but lots of work to do to get there.