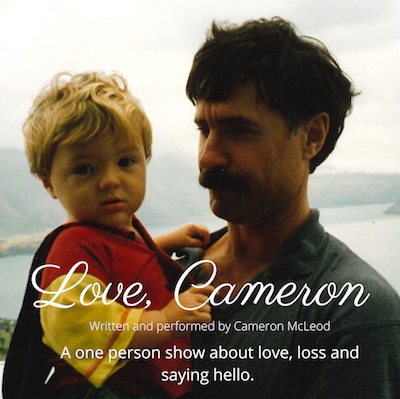 Mixing stand up comedy with tragedy shouldn't normally work. However, Cameron McLeod's show does just that and has the audience in stitches of laughter one minute and trying to hold back tears the next.

In this one man show written and performed by New Zealander McLeod, he shares stories about his childhood, his first kiss and ultimately his father's premature passing when he was just a teenager.

This was McLeod's first time running the show and nerves were visible at the beginning, but he soon found his stride and had the audience eating from the palm of his hand.

With this being a mix between stand up and spoken word, there wasn't much need for fancy set design or huge budget production. However, McLeod does manage to add in voiceovers and images to his show, which does add value and shows just how personal the production is.

This show does have a lot of heart and is very warm. However, I think McLeod could have been a bit better prepared. Quite often he had to refer to his notes, which didn't really detract from the show but if you're comparing this to other shows in the same genre then it looks unprepared.

I did enjoy the structure as it kind of flipped between stories and times, which kept me interested, and I don't think it's important for comedy to have a set structure.

As a performer McLeod has a lot of potential and the material is great, I think it just needs a bit of polishing.