In the science of Anthropology, a ‘missing link’ is used to describe a creature that was half man, half ape bridging the evolutionary gap between the two. In bringing ‘Street Scene’ to the Lowry as part of their Spring tour, Opera North have presented a hybrid of musical theatre and opera from 1947, which gives a fascinating insight into two art forms in one piece.

Writer Kurt Weill was a giant of both European and American theatre, working firstly with Brecht in Weimar Germany before fleeing the Nazi’s in 1933, to America, where he brought his musical genius to Broadway. He was a huge influence on an entire generation of writers, lyricists and composers with everyone from Hammerstein to Sondheim acknowledging the part he had in creating modern musical theatre.

Set in the Manhattan immigrant community in the mid 1940’s, Weil’s ‘Street Scene’ plays out twenty four hours in the lives of six families in a tenement building during a stifling Summer heatwave. With a cast of twenty principal characters and a similar number in ensemble roles, the chaotic, jumbled world of life on the streets of New York is captured in all its raucous glory. 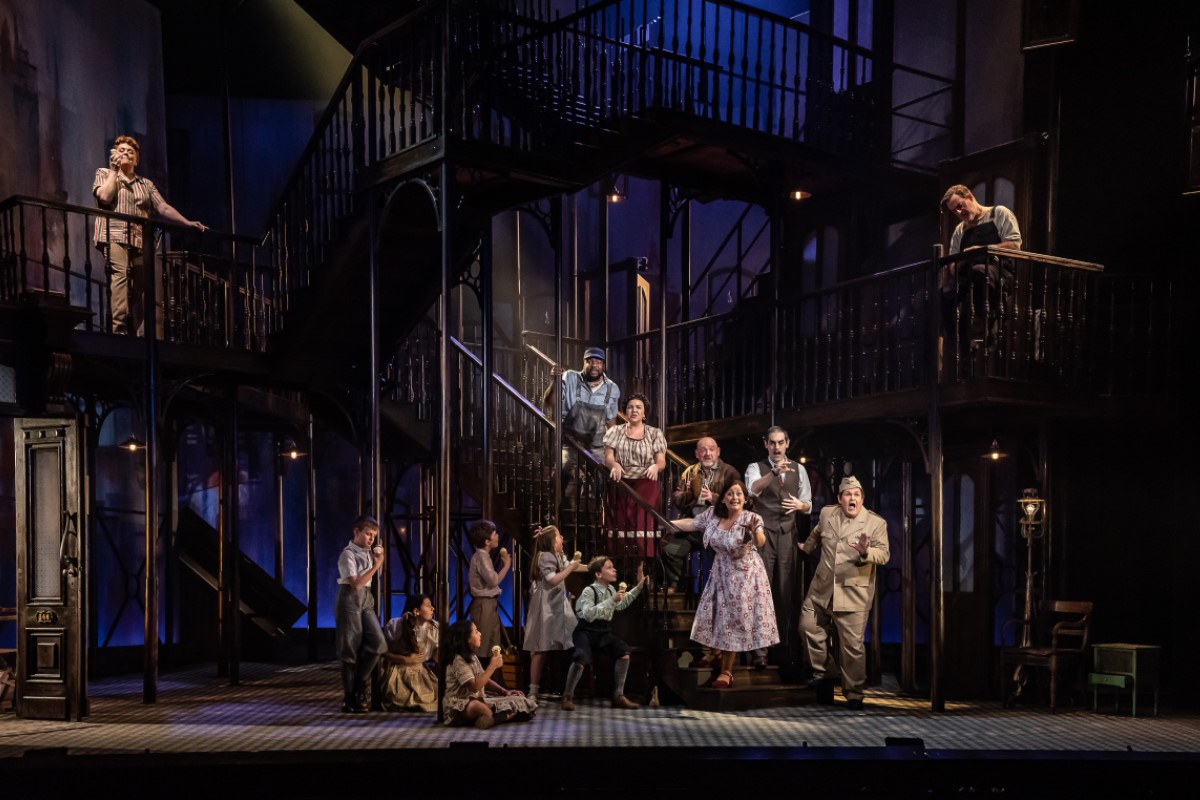 Through the competing narratives, we are led to the central love story between Rose Maurrant (Gillene Butterfield), the daughter of a drunken bully and Sam Kaplan (Alex Banfield), the son of an intellectual Jewish Marxist with ambitions to become a lawyer and get ‘out of this sewer’. This central storyline illustrates the link between ‘Romeo & Juliet’ and the later ‘West Side Story’ which owes it a huge debt in both style and substance.

However, there are other plots to hold our interest, an extra marital affair and eviction feature heavily. This may sound dull but it is this very celebration of the mundane and normal in operatic form which makes this piece so avant-garde.

Led by conductor Anthony Hermus the Orchestra bring their full weight to bear on a lush score. The audience can hear echoes of Bernstein and Gershwin in the clarinets and oboe with trumpet and horn adding the jazz element to a rich stew. From the opening ‘Ain’t it Awful, the Heat?’ through ‘Wouldn’t you like to be on Broadway?’ , culminating in a jitterbug dance inspired ‘Moon Faced, Starry Eyed’, this show was always best when showing the clear influence it had on later musical theatre development.

The metal balustrades and fire escapes of the tenement building were beautifully realised by Set Designer Francis O’Connor and the lighting by Howard Hudson was spectacular, especially during ‘The Woman who Lived up There’.

My main issue was that the energy came to a juddering halt when the more traditional operatic form took over, the subtitles available sometimes exposing the banality of the lyricism (they actually rhyme Moon and June at one point!) when compared with the preceding modernity. In addition, the pacing of the production was awkward, a strength sapping ninety minute first Act could have benefitted from a twenty minute edit and we reached a conclusion to the story without the benefit of the last fifteen minutes of the final act.

I found this audiences curiously passive and reserved both throughout the performance and at the conclusion. The excellent vocals on display deserved warmer appreciation as all the lead performances were excellent, albeit limited in their ability to show acting nuance by the simplicity of the libretto. There was great power in the ensemble throughout the evening, however my highlight was the jitterbug jiving of Dick and Mae (Rodney Vubya & Michelle Andrews) which is when the production was at its sparkling best.

I had been eagerly anticipating this show all year and have to confess a feeling of slight disappointment as I left the theatre. Although its constituent parts were individually excellent, I found it a curious mixture which though fascinating for theatre geeks and historians (like me) has no natural audience in modern theatre.