A View From The Bridge - The Ben Kingsley Theatre, Salford City College, Pendleton

It has oft been said that the best way to learn to swim is by jumping straight into the deep end; I had never thought before that this analogy might also apply to fledgling directors. But for the two seventeen year old students who made their directing debut this evening with one of the 20th century's most lauded and acknowledged seminal classics, this was nothing short of a baptism of fire.

This is Salford City College's Pendelton Sixth Form Centre. Normally all the public performances from this college are tutor-led projects; but this was a first for the college, in allowing a student-led idea become a reality. I sincerely hope there will be many more of these.

So, back to tonight, and Tabitha Rose Hughes and Joe Massey tried their hand at Arthur Miller's A View From A Bridge. Before I say anything else, then I must first say that with the students' ages and experiences taken into consideration, this was actually a very sensible and sensitive interpretation and to all involved I say a massive and heart-felt, well done!

For those that don't know the story, then, in a couple of sentences, the play is set in 1950s  New York, and centres around Eddie, a dock worker who lives with his wife Beatrice, and niece Catherine, for whom he has an unhealthy sexual fascination. He agrees to house his wife's Sicilian cousins, Marco and Rodolfo, and find them work on the waterfront, despite them entering the country illegally, but is not able to allow the love affair between Rodolfo and Catherine to blossom at any price. 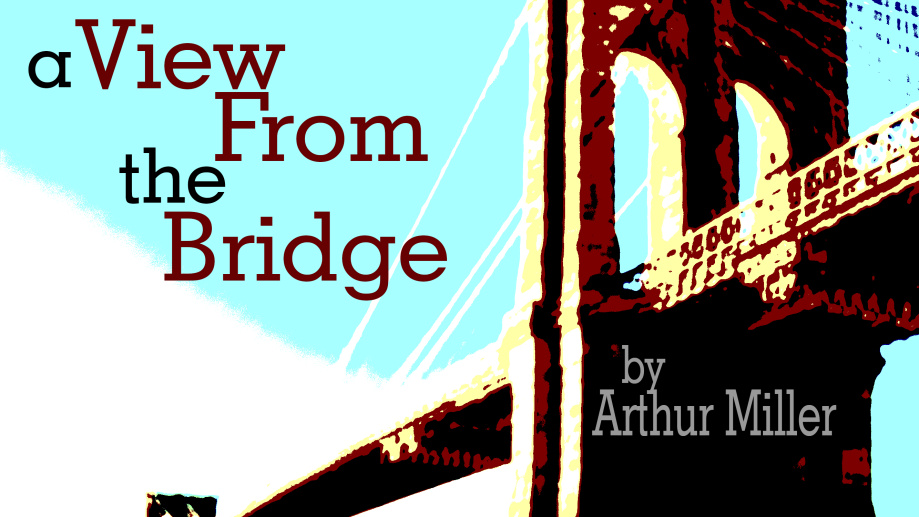 It is pure Miller; every single word counts, even the pauses; but it was the themes he addresses which interested our directors. Their passion for delivering the messages in this play - those of how the underdog is treated, social injustice, and issues surrounding immigration - did not go unnoticed and it was their passion that brought about the success of this play.

It is impossible to find a teenager who is able to play Eddie with the same depth and understanding as a 40-odd year old with 'baggage', but for my money Aidan Burgess made an excellent job, and his dogged determination paid off. There were two easily avoidable problems though which hindered the actors' job and our understanding of the play; the first was the staging. The stage size and configuration was not optimum. The majority of scenes are set inside Eddie's dining room, and yet the walk (passing the set for other scenes) across the stage to the SL wings was too long and contrived, and so this lengthened all entrances and exits thus slowing down the pace of the piece; whilst the omnipresent 'bridge' was a metal walkway and was noisy when the cast walked along it. Again too long and slowing the pace and energy. Generally the stage was too large and open for the style of directing and the choice of play. The second problem came in the form of incomprehensibility. Most of the cast had a very brave stab at the accents required for this piece, some with greater success than others, but my major consideration is whether or not the audience can hear and understand what they were saying. Articulation and projection were unfortunately lacking in many places tonight.

Aiding Eddie in his tragic-heroic misguided downfall, were a cast of well-chosen young actors and actresses. Rhiannon Chambers was his long-suffering wife, Beatrice, and Amelia Wedlock played her role as Catherine with a certain charm and naivety, becoming stronger and more belligerent towards the end. Joe Wellman was the 'Greek Chorus' lawyer who acts as both narrator and family friend, proffering advice he knows they won't heed. Nicholas Holloway and Deane Dixon-Foster played brothers Marco and Rodolpho, and brought with them a much needed change of dynamic to the play. Dixon-Foster being the only cast member who projected his voice throughout.

Despite the flaws and roughness though, this play was still very enjoyable and it was obvious that detailed study of both text and background had been done. Something like this is a huge learning curve for those involved and I applaud this wholeheartedly. I look forward to being able to see many more student-led projects in the future!