The Resistible Rise of Arturo Ui - University of Liverpool

Liverpool University Drama Society (LUDS) are to be commended for choosing Bertolt Brecht’s ‘The Resistible Rise of Arturo Ui’, a strong and biting piece of parody and satire, written by Brecht while in exile, in 1941, during Hitler’s Nazi control of Germany, it depicts in the form of an American gangster story (a format much beloved by Brecht) the rise to power of Hitler and his fellow Nazis, their conniving to circumvent all norms of liberal society, duping politicians who believed it was they who controlled the Nazis and learnt too late that it was quite the opposite.

Historical events such as the Reichstag fire and the Anschluss of Austria are given equivalents, a warehouse fire, the town of Cicero, and characters from history again are given equivalents, Hindenburg is Dogsborough, Giri is Goebbels, and Arturo Ui as the gangster, Hitler who takes over the Cauliflower trade, representing the bourgeoisie.

To the show itself, LUDS approached the play with a lively and vibrant spirit which certainly brought the play to life, played against a large black backdrop and all the ‘Brechtian’ devices we have become familiar with, actors breaking the story to speak directly to the audience, signs being used to denote blackouts and the like. 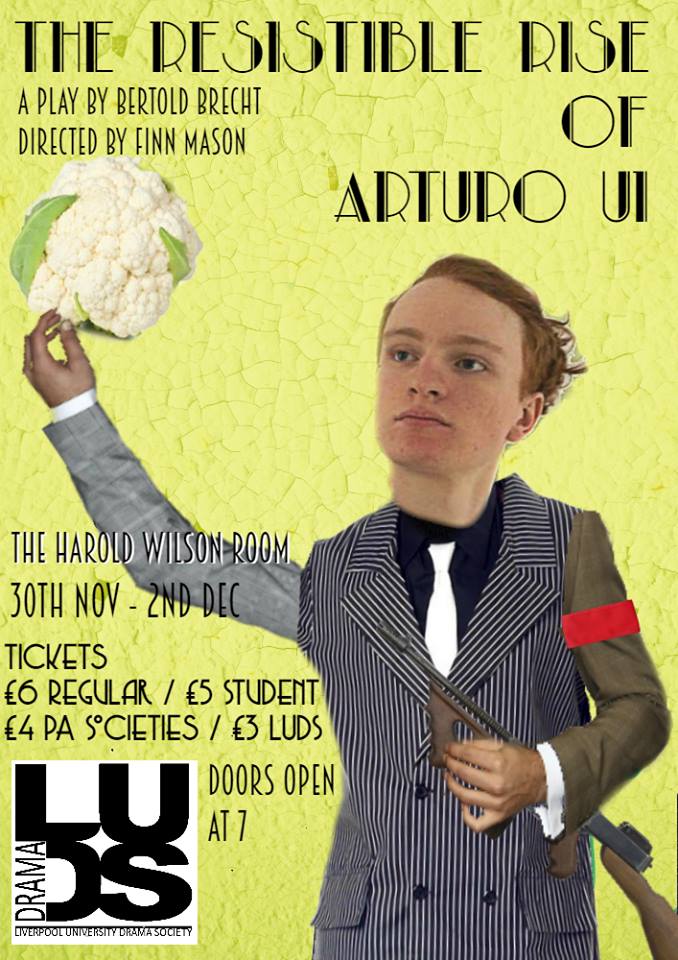 The acting was complemented by what was perhaps the most imaginative touch - a screen projection to a side wall which showed cartoon drawings of gangsters drawn to display their relative power, big or small and when images were not being shown, throwing the actors shadows onto the wall showing characters full of stature or impotently small.  In one sequence a grieving Betty Dullfeet, played with great resonance by Lara Field, denounces Ui for killing her husband (representing the Austrian Chancellor Dollfuss), her image gigantic with the force of her emotion in comparison to a dwarfed Ui.

The actors worked collectively, mainly playing multiple roles, with the exception of the actors playing the main characters – Leda Katsnouli as Ui’s sidekick Roma (Ernst Rohm) and James Weatherly-Buss as Ui, himself, both merit praise for the stamina required to carry on their shoulders, what is a long play (2 ½ hours running time).

Of particular note was Blake McKenzie, playing Givola (the great propagandist Joseph Goebbels) who distinguished himself as the silver-tongued ‘spin doctor’, showing an intelligence and subtlety in his delivery of the text, fully conveying the irony of Brecht – a good example of ‘less is more’.

Other fine performances were delivered by Iestyn Hughes as O’Casey, the beleaguered investigator in Nazi crimes and an under-used Jacob Postgate both as Ragg and Fish.  As Brecht was fond of saying ‘the proof of the pudding is in the eating’ and Hughes was always interesting to watch, showing a panache and virtuosity in his performance, particularly as the hardly conscious Fish, the innocent scapegoat for the Warehouse fire, who has been so badly beaten that his words are incomprehensible and who cannot stop himself from lolling to the floor, tongue hanging out of his mouth.

One other ‘support’ actor should also be singled out for her effect on the performance.  Richa Parashar, perhaps above all, brought to life the realism of the situation contained within the satire and avoided the traps of just playing everything for laughs and ‘hi jinx’.  Parashar was possessed of an authenticity of which, one hopes, Brecht may have approved.

So LUDS delivered the goods presenting Ui in energetic fashion, (and Brecht is much the better seen than read) displaying Brecht’s sharp and cynical insights, his Marxism giving him the necessary tools to pick apart the workings of Hitler’s Germany, with Hitler as, part Mac the Knife, part Shakespearean Richard III-esque tragedian strutting his stuff dishonest to the last.

So thanks are due to LUDS for applying themselves to this play, allowing us to enjoy Brecht’s vision of a corrupt capitalist world gone to the dogs, with Ui saying ‘Only death is free, protection, security, peace and quiet, all cost money – that’s life’, but maybe a word of encouragement is in order to move beyond performing for their own society and to take their wares out to a wider public to test their mettle and avoid becoming self-reverential.

‘The Resistable Rise of Arturo Ui’ can be seen at the Harold Wilson Room, Student Guild, University of Liverpool, Mount Pleasant, 7.30pm Thursday 30th November, Friday 1st and Saturday 2nd December.  Tickets cost £6 and you can pay on the door.