Simple but charming, Aldo is a devoted Aldi worker. Glued to his clipboard and eager to please, he takes customer satisfaction to a level I don’t remember reaching back in my shop work days.

Part of The University of Manchester’s MIFTA season, Aldo is a short comedy by Lucio Gray and directed by Emily Tandy that follows a bizarrely lovable motley crew through the difficult days of a store closure.

Firstly, a small nod to the opening playlist: from Moana the Vampire to Shania Twain to The Emperor’s New Groove, this soundtrack sets the mood and epitomises the naïve, harmless fun this play is all about.

Aldo’s best strength is undoubtedly its characterisation. Often bordering on caricature, the versatile cast playfully paint the universal workplace ‘types’: the one with the attitude, the one who’s too keen, the one who’s a little creepy and makes you feel uncomfortable, the one who’s got your back. 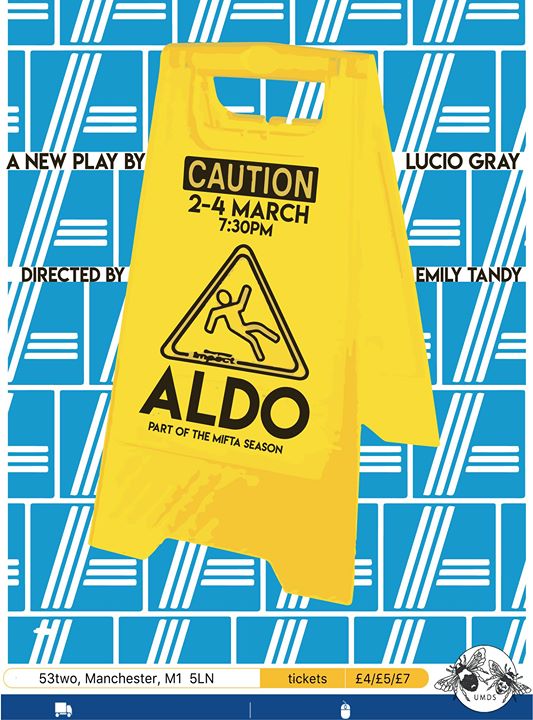 Its characters and scenarios form a comic portrait of everyday life. At some stage we’ve all been that pernickety, entitled customer or that bemused, frustrated sales assistant. And for some reason we all have disproportionately strong opinions on supermarket chains.

The strongest scenes feature quite early in the play, especially those with the trench-coated shoplifter, mastered by the very funny Lauren Ellis-Stretch. Gary Gannon is another stand-out comic, earning a great deal of laughs for his rather beautiful posing and spikey attitude, while Jordan Jones provides a refreshing contrast with his Lego-loving lorry-driver.

As the wide-eyed earnest protagonist, Aldo is certainly the most challenging to perform. Although Roman Armstrong carries this role well, as the play develops he starts to grate and his monologues become a little dull.

It’s clear that Aldo is written for comedy actors, but the script needs refinement. The dialogue is funniest when it’s at its most colloquial. Longer monologues are certainly weaker, while Aldo and Jenny’s conversations are (perhaps intentionally) sickly sweet.

All-in-all, Aldo starts well and contains genuinely funny moments, but is not wholly sustained; for a one-act play it does seem a little slow-paced. The concept is simple but strong and the execution is excellent (especially for a student production), but what Aldo really needs is more substance, more action and a slightly sharper script.

Saying that, I have never seen cardboard boxes used so effectively on set.