Spring Awakening is a brave choice for any new director. But this Manchester student cast, directed by Phoebe Gibby, rises to the challenge with impressive levels of teen angst. Produced as part of the MIFTAs Drama Festival, Gibby’s talented team perform Anya Reiss’s updated translation from 2014 with the perfect blend of comedy, self-awareness and gravity.

Wedekind’s provocative and controversial ‘children’s tragedy’ translates all too easily into 21st century Britain as Weiss transports it into the online present. While addressing sexuality so brazenly on stage has lost its shock factor, the core themes of rape, consent and child suicide are as critical and pressing as ever. If Reiss’s bold adaption felt relevant in 2014, it does even more so four years later, with the growing evidence of teenage stress and depression. On the back of the “Me Too” movement and the changing landscape of social media, Gibby’s production is aptly timed. 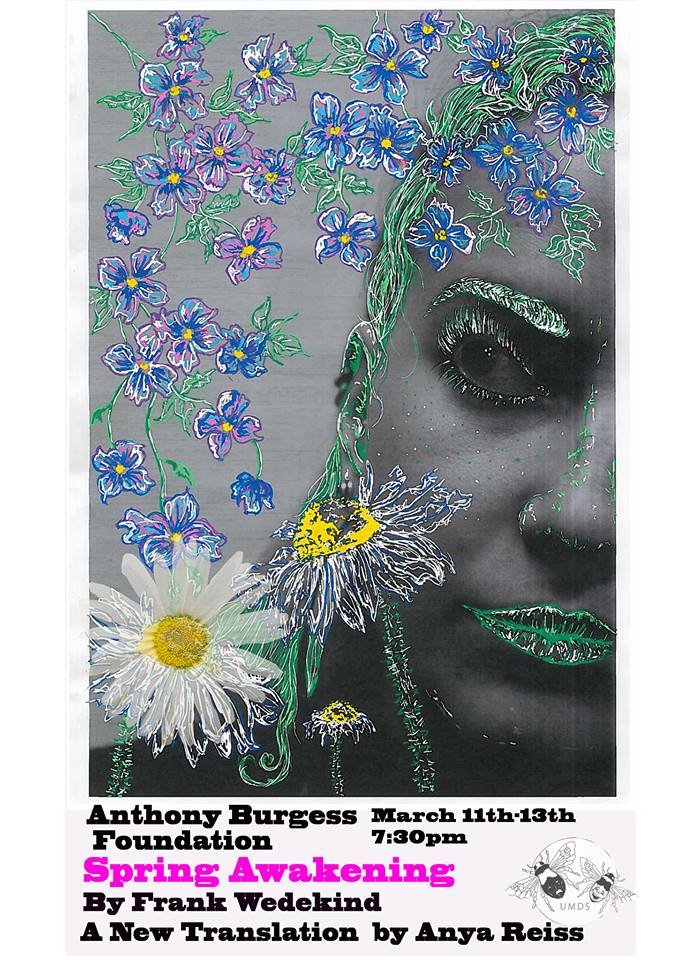 Cyber-bullying, social media, abuse and exam pressure are all tackled head-on. That said, it’s a shame that more technical and interactive elements are not included as they were in Reiss’s 2014 production. Skype, YouTube and social media references provide a creative opportunity that is missed in this production, I expect for logistical reasons.

These meta-theatrical moments are my favourite aspects of Reiss’s adaption, as the eight actors flick between the teenage and adult roles. While this could still be improved in Gibby’s production, with greater care over clarity and characterisation, Eliza Teale pitches the irony brilliantly as both Thea and Wendla’s mum. This performance emphasises the continuing inevitability that older generations will fail to protect and educate children sufficiently.

Recent Netflix series 13 Reasons Why made an impact for a reason; raising crucial questions about copycat suicide ‘contagion’ in 2017, it seriously concerned schools and parents around the country. There is clearly still great anxiety over showing young people committing suicide, whether it’s fiction or not. Unlike 13 Reasons Why, however, this production of Spring Awakening cannot be accused of glamorising suicide, reducing rape to a plot device or trivialising the increasing strain that young people are under today. Sensitive and thoughtful, Moritz, Melchior and Wendla all present a believable portrait of tortured teens with nowhere else to turn.

One scene that jars, however, is that of the teachers reprimanding Melchior. Reaching a new level of comedy and caricature, the over-acting teachers turn an important point about school scapegoating into a throwaway, comical scene. Another weak spot is Hans and Ernst’s love scene. Although it is artfully sensitively played, it does seem out-of-the-blue; the absence of foreshadowing means their love will come as a surprise to anyone who doesn’t know the play.

Elements of the script that remain more faithful to Wedekind’s original lyricism sit slightly less comfortably with this student cast, but for the majority of the performance their attitude, tone and delivery is brilliantly directed. Ele Robinson and Nick Kane give especially sensitive and powerful performances, balancing bravado, frustration and naivety in the tragic Wendla and Melchior.

Overall, Phoebe Gibby’s production of Spring Awakening sets a very high standard for student theatre; it’s definitely a strong contender for an award in the MIFTA season. With excellent casting and compelling, believable performances, it presents a generation struggling with the contemporary pressures of social media and age-old academic and sexual expectations with maturity and empathy.