This is a temporary exhibition at The Manchester Museum on Oxford Road, and is on display there until 17th April 2016, and alongside the museums already rather large and comprehensive permanent Egyptian collection, this makes for a very real and comprehensive insight into one of our Ancient World's most fascinating cultures.

Despite the size of this temporary exhibition, it is surprisingly compact and comprehensive, and exceptionally well laid out, with a clear through-line and easy to understand information boards for each exhibit.

Most of the exhibits and information relates to the excavation of the Saqqara site in 1964 / 65 where many thousands of mummified animals were discovered buried together, especially cats and birds.

The Egyptians believed that animals possessed supernatural powers and were able to pass between the worlds of the living and the dead / humans and Gods, and so were often used as messengers to gods, and this is also why many of the Egyptian Gods are either shown as half human with an animal head, or are able to transform completely into certain animals. Animal mummification therefore was just as important as human.

Amongst the exhibits on display are various statuettes of animals ranging from birds to bulls, ibises to baboons. There is even a wonderful large basalt baboon statue, the form often taken by the God of Wisdom, Thoth, and this statue dates from 945 - 715 BC. Displayed with this is a limestone Offering Table from the same period.

Part of the room is given over to this European 'romantic' vision of the ancient Egyptians, and is in two distinct halves. First, the image presented to our Victorian ancestors through paining. This distinctly classical style of painting, romanticising life in Ancient Egypt was what our forefathers believed to be true, and so this led to the second part of this section, and our lust and desire to excavate, to sight-see, but above all to loot and pillage, bringing back home as many 'souvenirs' as one could carry. Even the well-intentioned archaeologists themselves brought back relic after relic for their benefactors, whether they be museums or private collectors.

The first part then shows three rather lovely paintings, two of which are by Edwin Longsden-Long painted around 1878. 'The Gods And Their Makers' and 'Athlete, Attendant Of The Sacred Ibis'.

The second part shows photos of the glory-days of archaeology along with some of the requisitioned 'gifts'. It also tells the story of 180, 000 mummified cats being brought by ship to Liverpool in 1890 only to be used as fertiliser!!

Then on to the mummified animals themselves. Here we see some excellent examples of animal mummification. There are three superbly preserved cat mummies even retaining some of their original colour on the linen; a painted wooden cat coffin with a mummified cat inside, taken from Saqqara (664BC); a large Ibis mummy (again 664BC); mummified crocodiles - two specific exhibits here - one shows an unwrapped mummified crocodile which was fascinating, and the other, according to the helpful plaque states that after x-ray, it shows that inside the linen is actually 4 crocodile skulls and four baby crocodiles all preserved as 'one'.

There are mummies of jackals, snakes, shrews, and ibises too. My favourite though was a mummified cat preserved in a human mummy coffin complete with headdress and beard. It would have looked, when closed, just like an infant human sarcophagus. The colours and designs on the coffin were still amazingly well preserved.

The exhibition ended with informative photos, information boards and TVs showing you both how to mummify and how to x-ray a mummy.

The only part of this otherwise excellent exhibition which really didn't work for me was a recreation of a subterranean animal catacombs which visitors must walk through on their way round the exhibits. It was very poorly done using blown-up photographs and lacked any atmosphere or focus. 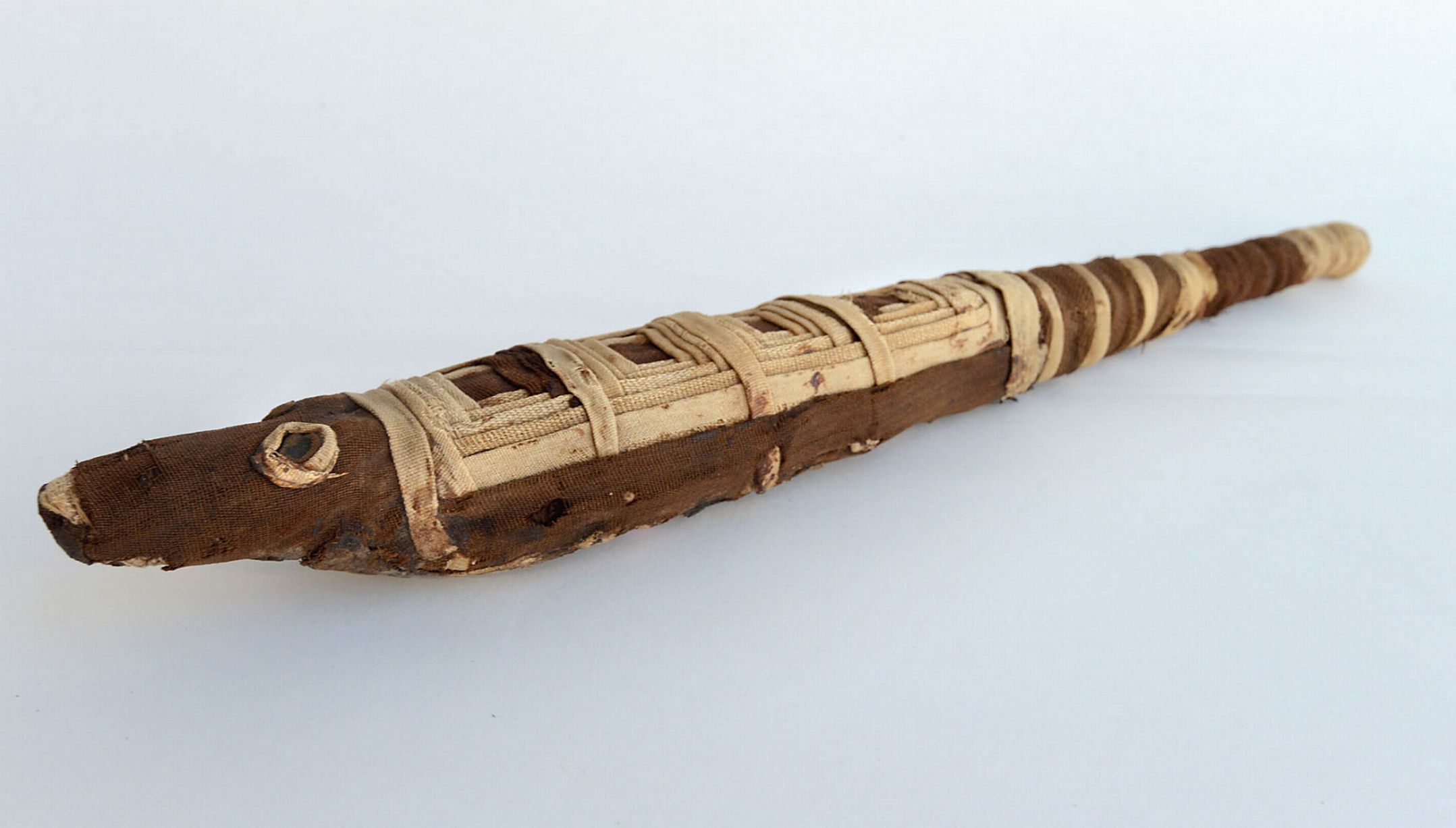