The Regent is sent into the swinging sixties this week as we are transported to Essex in 1961 for the 10th anniversary tour of ‘Dreamboats and Petticoats’ the musical that is based on the hit CD which topped the charts for several weeks when it was first released. The show features many famous songs from the time period including ‘Runaround Sue’ and ‘Da Doo Ron Ron.’ There was a large amount of songs in the show that I didn’t recognise but I suppose that being twenty three I wouldn’t know all the songs from the 1960’s.

The audience was mostly filled with people that knew the genre perfectly. I can honestly say they were having the time of their lives singing along, clapping and even dancing when invited to during ‘Lets Twist Again.’ I did get up and dance at this point myself. The show very much allows the audience to get involved and sing along, you’re invited to do this on songs like ‘Teenager in Love.’ This I felt was a nice touch and very different to usual theatre shows were it may be frowned upon by other audience members to so. 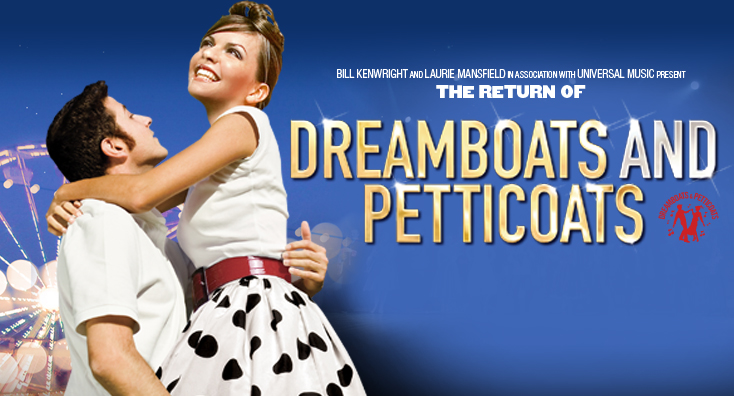 All this being said, for me although I genuinely enjoyed elements of the show, the script left a lot to be desired.  It’s your typical love story with a few underlying storylines to help push the show along. However, I honestly found the script so predictable. Don’t get me wrong if you wanted a night out just for the music you’d love it, but as a whole musical the script just isn’t the best. You felt that it had been written so the songs fitted around it rather than it flowing. Another downside for me is that the cast were all miss aged for the characters who were supposed to be 15-18 I don’t think I believed one was around that age group. I understand that a lot of the cast have been kept from the various other shows they produce but this made the show less believable for me. The cast did give some stellar performances in the show though.

I loved David Luke as Ray and his rendition of ‘Poetry in Motion.’ This was a definite highlight of the show for me. The cast did this as an acapella and this was stunning to watch and was beautiful to hear. He also added some comic relief throughout the show. He and Alistair Higgins who played Bobby worked well together and their friendship throughout was very apparent. Elizabeth Carter as Laura also gave a sweet and believable performance.

I really enjoyed the band in the show and thought it was exceptional that the cast both played the instruments and performed their roles this was an exceedingly impressive point of the show. The set and costume were also both superb and reflected the time period well. Overall as a night of music it’s definitely worth a watch. I enjoyed watching other people’s reactions to the show you could genuinely see people reminiscing on the past which was heart-warming.