This Is Elvis - Regent Theatre, Stoke

The story opens to a frustrated TV produced Steve Binder (Benjamin Stratton) awaiting for Elvis. Elvis had just hinted to his band that he will not appear on stage. Binder takes a gamble for the sake of the audience and introduces Elvis. Shortly after this, the somewhat reluctant star emerges on stage. Elvis is played by Steve Michaels who from the very moment he appears, ensures the entire audience are very clear that this show is entirely about him.

There is no doubt at all that Michaels plays the part of an extremely accurate, perfectly styled and very convincing Elvis. As an award winning tribute artist, he demonstrated his passion to the audience for portraying Elvis through his interpretation of the moves, the idiosyncrasies and most importantly the voice. His voice is phenomenal and it never wavered at all. He was shaking his legs, gyrating his hips and leaving his quiff to do whatever it wanted- smattered with a few Elvis grunts of ‘Uh huh’, Michaels stage presence is a force to be reckoned with. 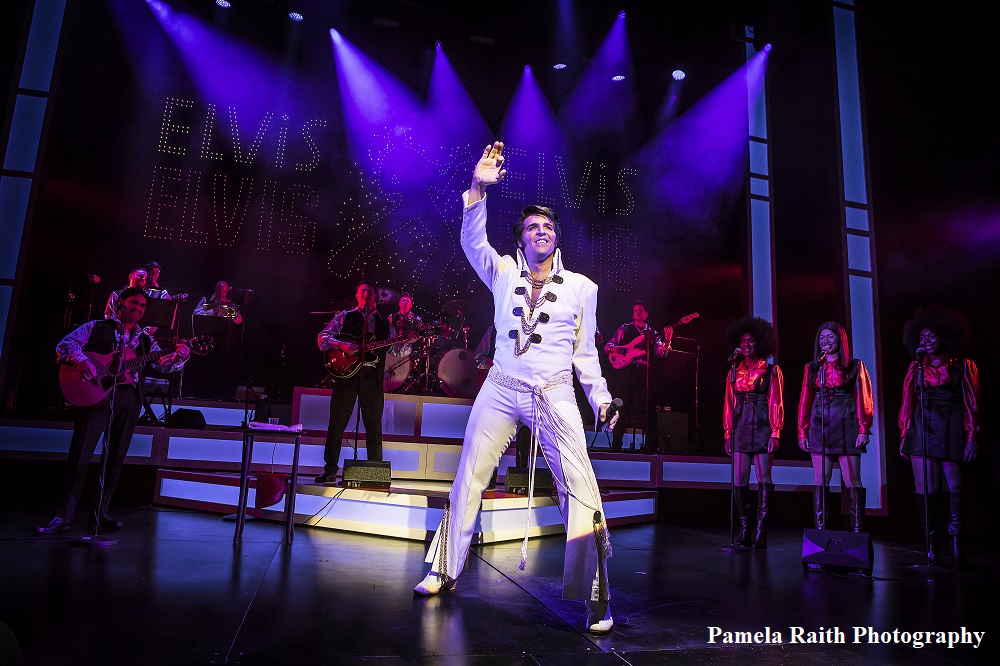 However, it is clear to say that this may not the show be for you if you are intending to see a musical about the life of Elvis or even part of his life. It was not actually a story of his life at all. The show certainly hints at a ‘story’ in the first Act, when the TV special is portrayed. Michaels plays an Elvis who is experiencing anxiety prior to large performances. It depicts him taking medication and not sleeping and also refers to his deteriorating relationship with Priscilla and Lisa-Marie. Sadly these issues are never really taken anywhere as Act two is purely about Elvis’ performance in Las Vegas.

The second half of the show is entirely focussed on The Showroom of the International Hotel in Las Vegas. Stand out songs for me in this half was possibly ‘Viva Las Vegas’ and ‘Suspicious Minds’. Gradually the audience took to their feet towards the end of this half and by Jailhouse Rock, the final song, the majority of the audience were on their feet attempting to jive and twist in front of their seats.

A richness was undoubtedly added to the stage when Elvis introduced his backing singers ‘The Sweet Inspirations’ (played by Katrina May, Misha Malcolm and Chevone Stewart). Their voices were outstanding and the harmonies in ‘Oh happy Day’ and ‘Bridge Over Troubled Water’ were utter quality.

I have pondered over whether it is actually appropriate for me to even comment on the acting in the show because other than Elvis, the others on stage were the band themselves and in the main they were clearly playing the musicians and vocalists that they actually are. If this was the talent to be portrayed then they did this incredibly well. However, as far as acting goes I’m not sure they really demonstrated this. Certainly Reuven Gershon who played Joe Esposito and Mark Pearce who played Presley’s very close friend Charlie Hodge had the most interaction with Elvis but as a whole, the band were fairly static as a bunch of actors. Conversely as a bunch of musicians and vocalists you would find it hard to deny their talent however.

As I left the theatre to the words ‘Elvis has left the building’ I think that as a story about Elvis and his life it didn’t really take me anywhere. However if you want to witness the unparalleled talents of Steve Michaels as Presley, right down to his curled lip, I would suggest you would find it hard to find a better tribute act.