For the first time in its 120-year history Birmingham Hippodrome has produced its own youth show staring 16-24-year olds from the region, in a bold and colourful production of West Side Story

West Side Story is based on Shakespeare’s Romeo and Juliet. It tells the tale of two gangs, the American Jets and the Puerto Rican Sharks, and the love that blossoms amid the tension on the streets of 1950’s New York. Many of the themes, racism, knife crime and teenage gangs contained in the story are as relevant today as they were when it was written in the 1950’s by Stephen Sondheim and Leonard Bernstein.

Right from the opening number the energy and passion of the young cast is evident as they leap and jump in choreography inspired by Jerome Robbins in the safe hands of director/choreographer Matt Hawkworth and assistant choreographer Ruth Seager.  The dancing is at the same time sharp, precise and flowing with every cast member bringing their own personality to the moves. 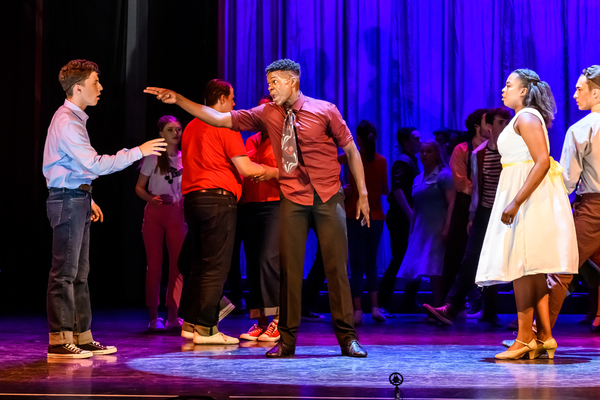 Taking a cast of youngsters with varying levels of experience and putting them on the Hippodrome stage is a huge challenge, one that Hawkworth and his team including Musical Director Paul Murphy have managed with enormous success.

The entire cast give performances that rival professional productions, even though they had only 18 days of rehearsal. From start to finish the audience were entranced and captivated by the depth of characterisation and vocal quality of the cast. The big numbers were spellbinding, filling the stage with colour.

With heartfelt emotional moments and tension throughout the story, some light relief was provided by some of the Jets as Action, played by Brook Jenkins lead them in the sarcastic “Gee, Officer Krupke”. The boys seemed to relish in this comedic number that gives the audience time to breathe. Both gang leaders, Riff (Matthew Pandya) and Bernardo (Gibsa Bah) were strong and determined with vocals to match. Their movement in the rumble and repeated in the ballet sequence was as graceful as it was powerful.

Anita (Ruby Hewitt) led the Sharks girls in the well known “America” which helped to show her attitude to her new home. While Hewitt shows the tough side of Anita, she also expertly portrays her heartbreak and fear after the “rumble”. Of course, the show is mainly about the love between Tony (Alex Cook) and Maria (Kamilla Fernandes). These two have a wonderful chemistry that creates touching moments, especially in the balcony scene. Fernandes takes Maria from innocent naïve girl to angry and bitter woman with ease.  She also has a great rapport with Anita, the harmony created by Fernandes and Hewitt in “I have love” is sublime.

Tony has some big songs to sing and Cook takes these and blows the audience away with his stunning vocals, he can pour so much feeling into the word “Maria”. Singing isn’t his only strength, he is a true triple threat and definitely one to watch for in the future.

With a pared down set the stage never looked so big but the design of this and the lighting (Al Parkinson and David Howe respectively) complemented the action giving the large cast room to move. It proves that an elaborate set is not needed and lets the performances shine, especially in the stark finale.

If this is the kind of production and talent that the Hippodrome can bring to the stage when they produce their own shows, then I hope that they won’t wait for another 120 years to do it again. Both the theatre and especially the young performers should be immensely proud of this production. All of this cast should be gracing professional stages for many years to come. Get a ticket if you can for this incredible production.