This was always going to be a different version of Pride & Prejudice; nothing could prepare me for just how different or how thoroughly entertaining it would be.

The tale is one of 5 daughters. They need to marry so their husbands can inherit their father’s house and money and save them from a life of destitution. With a mother obsessed on marrying her girls off, they all know their duty but have their own take on how they fulfil it. Will true love win over all the obstacles?

When the house lights dim and the pop music starts you begin to wonder where this play is going, for the next couple of hours you are taken through a well-known story in an unusual and vibrant way. The story is told by six servants claiming that without them the stories wouldn’t happen, even if the servants are never named. 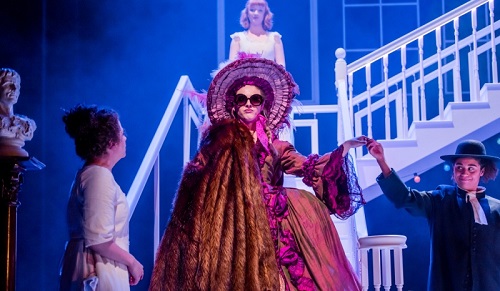 Every character is played by these six ladies as the story unfolds with songs dotted throughout for comedic/narrative effect.

While the story is Jane Austen’s, every scene and plot point is here, that is where the resemblance stops. The costumes are symbolic, the set multipurpose, the lighting colourful, there are microphones and a portable speaker, and the accents and language are far from the original text. It is Austen but with a twist. Writer of this version, Isobel McArthur has come up with a piece of genius that needs to be seen to be believed.

With every cast member playing multiple characters you could get confused. This wasn’t possible as every actress on the stage made each character so distinguishable that you could almost forget there were only 6 cast. The changes were not only made with a coat or dress, but all the mannerisms, voices and postures changed. This created much comedy and added to the fun while making sure the plot was never lost. It is impossible to single out any one person for special mention. Tori Burgess, Felixe Forde, Christina Gordon, Hannah Jarrett-Scott, Isobel McArthur and Meghan Tyler were all sublime! They acted, they sang, they played instruments all while doing insanely quick costume changes and virtually never leaving the stage. The audience were totally captivated.

Avid Jane Austen fans may find that this is not their cup of tea, pop songs and some colourful language may be a step too far for some. For those looking for something different this definitely ticks that box. It is full of energy and fun.

Everything about this production shines, it is a slick, laugh out loud funny, joyous romp through a classic tale. If you miss it you will cry into your regency bonnet.