The play's the thing, of course it is, but this set is something else again, a fascinating view of a 50s style full size doll's house, if seemingly rather Americanized with its sunshine yellow kitchen. And here's Judy, swanning around, all smiles and satisfaction in her glorious swirly skirts and pretty cardies, and genial, doting husband Johnny who must be revelling in being waited on, as they say (and I've often wondered why), hand and foot and finger. Well, it's a fine line between idyllic and idiotic as they set on their way to Happy Ever After...

But isn't that title odd? Kind of topsy turvy and confusing, presumably it's meant to indicate a bizarre lifestyle, with Judy seeking to find herself; she admits to an identity crisis. A woman's work really is never done, and playing at house is not actually making her a happy bunny. It's apparent from the start because her oddly croaky voice suggests she is under a lot of strain. 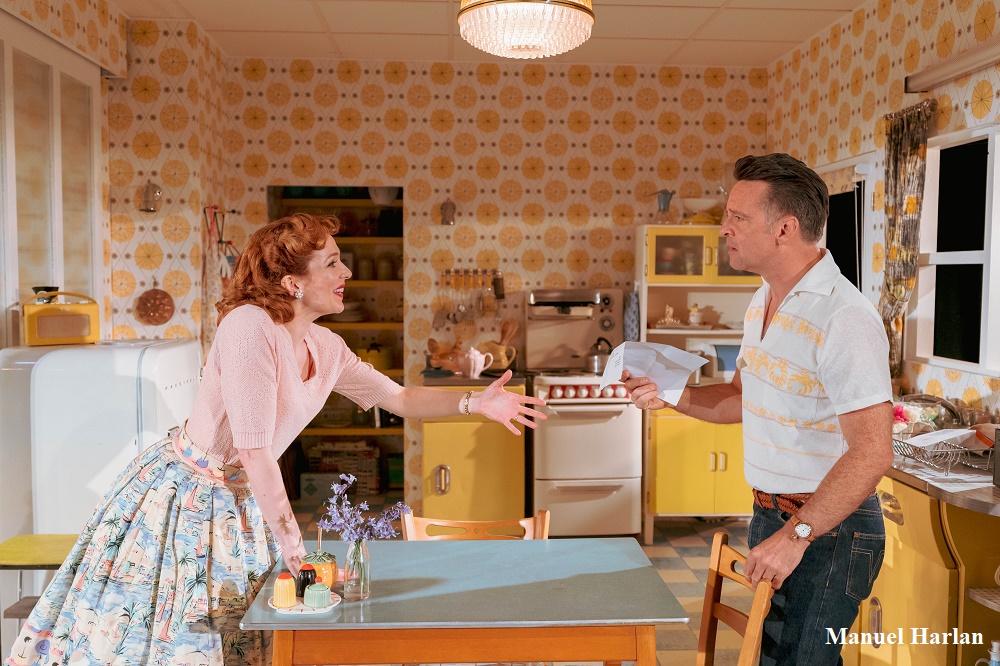 It's maybe an attempt to bring out more of the humour, although Katherine Parkinson is a first class actress, well able to manage that, and the entire role in all its obsession and brittle artificiality, with one hand tied behind her back (don't worry; they're not that kinky)

She does have plenty on her plate, not just her delicious home-made dinners: money worries. Jo Stone-Fewings is excellent as Johnny, affable and well-meaning, but by no means ambitious. Work is not going well, especially with the advent of a new boss, Alex, dauntingly and effectively played by Sara Gregory. In one excruciatingly funny scene, she is invited into their home; welcomed to their world. But at least she and Johnny get along fine. Or is that another cause for concern? Parallels are also drawn with their friends, Fran and Marcus, where Siobhan Harrison and Hywel Morgan make a believable couple in a faltering marriage, ricocheting between wit and woe.

Trouble is, the play is also confusing, raising questions more than providing answers so it can take time to work out what is going on. One lengthy scene is a flashback which provides useful background information although its main purpose seems to be a big, and admittedly incredible, reveal which had the audience clapping. Another interesting idea is the way the scene changes take place, with Fran and Marcus treating the place like a hotel, one holding a dance marathon. They even manage to carry out the tidying up of props whilst jiving and jitterbugging. However, their enjoyment each time sets up the assumption that the following scene is also going to be a happy one. But one major flaw is barely worthy of the description deus ex machina because it completely contradicts an earlier scene which firmly establishes that something is never going to happen. Not only does it take place after all, but it also seems to make another plot development redundant.

Yes, this is yet another production where you do not want to give the game away...any suggestion of Stepford Wives and you're heading in the right direction, although with uneasy undertones rather than sinister. It feels as if this satire was written by Laura Wade mainly because of her strong views on feminism and sexism, the former being splendidly expressed by the formidable Susan Brown in a monologue as Judy's exasperated mother, Sylvia. The latter is brought home by creepy Marcus with the disturbingly pained innocence of such men.

Nonetheless, it's all framed in an innovative show, and even though not wholly a successful merger, you could say it makes for a fantastic evening.