From a working class upbringing in London’s Muswell Hill, four friends, including brothers Ray and Dave Davies in 1964, founded The Kinks and went on to achieve success both in the UK and internationally, however it was no easy road.

The musical tells the story of how they came from humble beginnings to go onto become a huge success. Throughout the musical the audience see the various low points of the bands careers, from Ray and Dave’s sister’s untimely death, the ongoing sibling rivalry between Ray and Dave, management issues, Ray’s doomed marriage and their subsequent ban from the United States following a dispute with the musicians’ union, along with on stage fights at gigs. 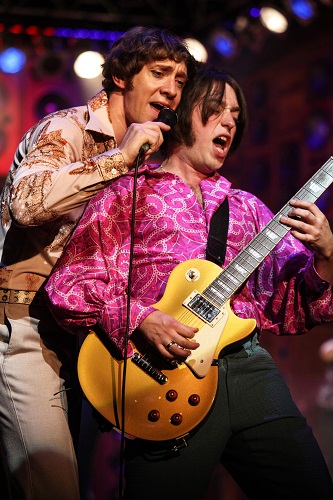 Set amongst the backdrop of the political and social change of the 1960s, the story takes you through how The Kinks found their definitive sound through the band's lead guitarist Dave Davies experimental distorted power chord sound on the group's third single, "You Really Got Me”. Their distinctive sound rocked the nation and influenced generations. The song, written by Dave's older brother Ray, went to No 1 in the UK charts and preceded a string of hits.

Get to relive (or “witness” for the first time) their Top of The Pops debut, their infamous American tour and their triumphant comeback.

Featuring the hit songs “You Really Got Me”, “Lola”, “Waterloo Sunset”, “Dedicated Follower of Fashion”, “All Day and All of the Night” and of course the title track “Sunny Afternoon”, the show is full of energy and nostalgia.

With music and lyrics by Ray Davies (Olivier Award for Outstanding Achievement in Music), a new book by Joe Penhall and direction by Edward Hall, Sunny Afternoon’s faultless musicianship and brilliant songs come together for a moving portrayal of The Kinks' amazing journey during the youthful, rebellious 1960s.

The stage set is fantastic and is the first show I have seen at Sheffield’s Lyceum Theatre where the stage has been extended into the audience creating a sort of catwalk runway through the first few rows of the stalls. I particularly loved the backdrop of the vintage wooden speakers and amplifiers which played a major part in the stage set throughout the show. With slick choreography - my favourite being during “Dedicated Follower of Fashion” and songs that make you want to dance in the isles, Sunny Afternoon is a feel good musical for all ages - although my companion and I were definitely two of the youngest audience members by a long shot, the atmosphere in the audience was that of energy and passion and it felt like we had been transported back in time to the 1960s.

Mark Newman as Dave “the rave” was a loveable character who oozed charm and likability and kept the audience in roars of laughter with his dumb but loveable yet realistic portrayal of Dave Davies. I can’t fault any cast member, however as someone with very little knowledge on the history or music of The Kinks, it was Mark Newman as Dave who really held my interest in the storyline and songs throughout the show.

After opening in London in 2014, the show went on to win several Olivier Awards in 2015 for Best New Musical, Best Actor in a Musical (John Dagleish), Best Supporting Actor (George Maguire) and Outstanding Achievement in Music (Ray Davies) and a UK tour opened at Manchester’s Palace Theatre in August 2016, and continues to tour until March 2017 (with the final venue being Bristol).

The show is a fabulous night out for theatre goers both young and old! Grab your tickets and head back into the Swinging Sixties! Sunny Afternoon is on at Sheffield Lyceum Theatre until Saturday 29th October.