Based on the children’s book of the same name by Michael Morpurgo, Running Wild has been adapted for stage by Samuel Adamson and was originally produced by Chichester Festival Theatre and Regent’s Park Open Air Theatre. Although the original book tells the story of a young boy, the stage adaptation replaces “Will” (the boy in the book), with Lily, a nine-year-old girl.

Lily is grieving for her father who died in the Iraq War.    When Lily’s Grandma suggests to Lily’s mother that the pair of them take a holiday in Indonesia, Lily is ecstatic by the idea, as her father often made a joke about elephants on the bus home from Chelsea Football matches (both Lily and her Dad are avid supporters!); when he would pretend to throw banana’s out of the window to “ward off the elephants” to which Lily would always reply that there were no elephants in England.

For Lily, the trip to Indonesia is more than just about having a holiday with her mum; it’s the chance for a new start and the opportunity to ride an elephant called Oona.  However, Oona (the elephant) is in a peculiar mood that day, as her handler explains to Lily that Oona refused to go into the sea earlier for her usual morning dip.   Suddenly Oona charges off into the wild with Lily clinging on for dear life.  As they ascend the hill, Lily witnesses the Boxing Day tsunami obliterating the beach where she had been moments earlier. 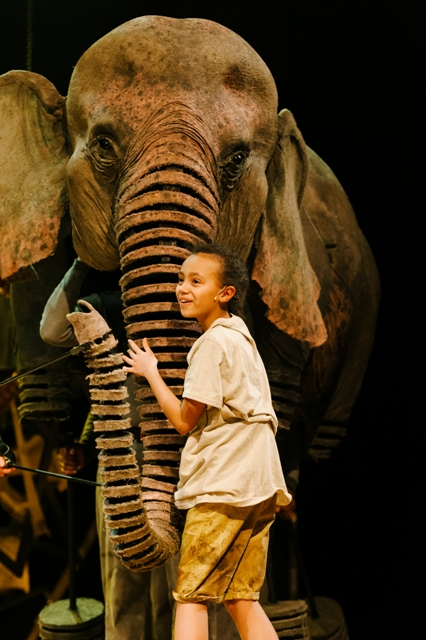 Oona sets off into the jungle with Lily on her back, unsure of what is in store for her.  Although it takes Lily time and patience, she soon learns to communicate with Oona and gains her trust.  Oona helps Lily find fruit and water enabling her to survive in the wild.  Remembering what tricks her father taught her as a keen fisherman, Lily is also soon able to catch fish to cook and provide her vital food for survival.

As she adapts to jungle life the best she possibly can, despite all the biting insects and leeches, she meets and befriends some orang-utans’ as well as encountering a standoff between Oona and a tiger.   Fearing for her life during the standoff, Lily remembers the poem “The Tyger” by William Blake.  Saying this poem out loud (“Tyger tyger burning bright, in the forests of the night…”) gives Lily courage.  This new found bravery gives Lily the courage she needs when she is kidnapped by hunters and finds out about the threats to the rainforest through trade in exotic pets, animal furs, palm oil and timber.

As the hunters are holding Lily prisoner, Lily’s grandma has travelled to Indonesia having heard of the tsunami disaster and frantically wanting to be reunited with her daughter and granddaughter.   Will Lily’s grandma track down her missing family or will she return to England defeated?

With puppetry to rival War Horse, Running Wild is simply the most visually astounding piece of theatre I have ever witnessed.  Throughout the performance the stage consists of a variety of different pieces of junk, from old ironing boards to parts of a surfboard, bound together to form back drops highlighting the latter devastation of the tsunami.  The puppets alone are worth the ticket price, particularly Oona.  The puppeteers are the real stars of the show – after a couple of minutes you no longer notice them and the animals truly appear to come to life.

An absolute must see for the entire family! Performances run until Saturday 11th March at the Lyceum Theatre, Sheffield.