Based on the 1957 movie with the same title, La Strada, (meaning "The Road"), is an Italian drama by Federico Fellini which tells the story of a travelling "World’s Strongest Man" circus actor, Zampanò.  On his travels, Zampanò meets a poverty stricken mother and buys her daughter, Gelsomina, for ten thousand lira.  He promises her work with him as his assistant on the road, and she promises to send money to her family.

However, Zampanò is brutally unkind and violent towards Gelsomina, drinking away what little money their act brings in, often vanishing for days with various love interests, leaving Gelsomina to fend for herself.  However he always returns to her, and despite being ill-treated and never seeing any of the promised monies, Gelsomina stays faithful to Zampanò.  That is until she meets Il Matto (The Fool), who is the total opposite of Zampamò and he takes her under his wing and transforms her into a strong clown/mime act with a Charlie Chaplin resemblance. 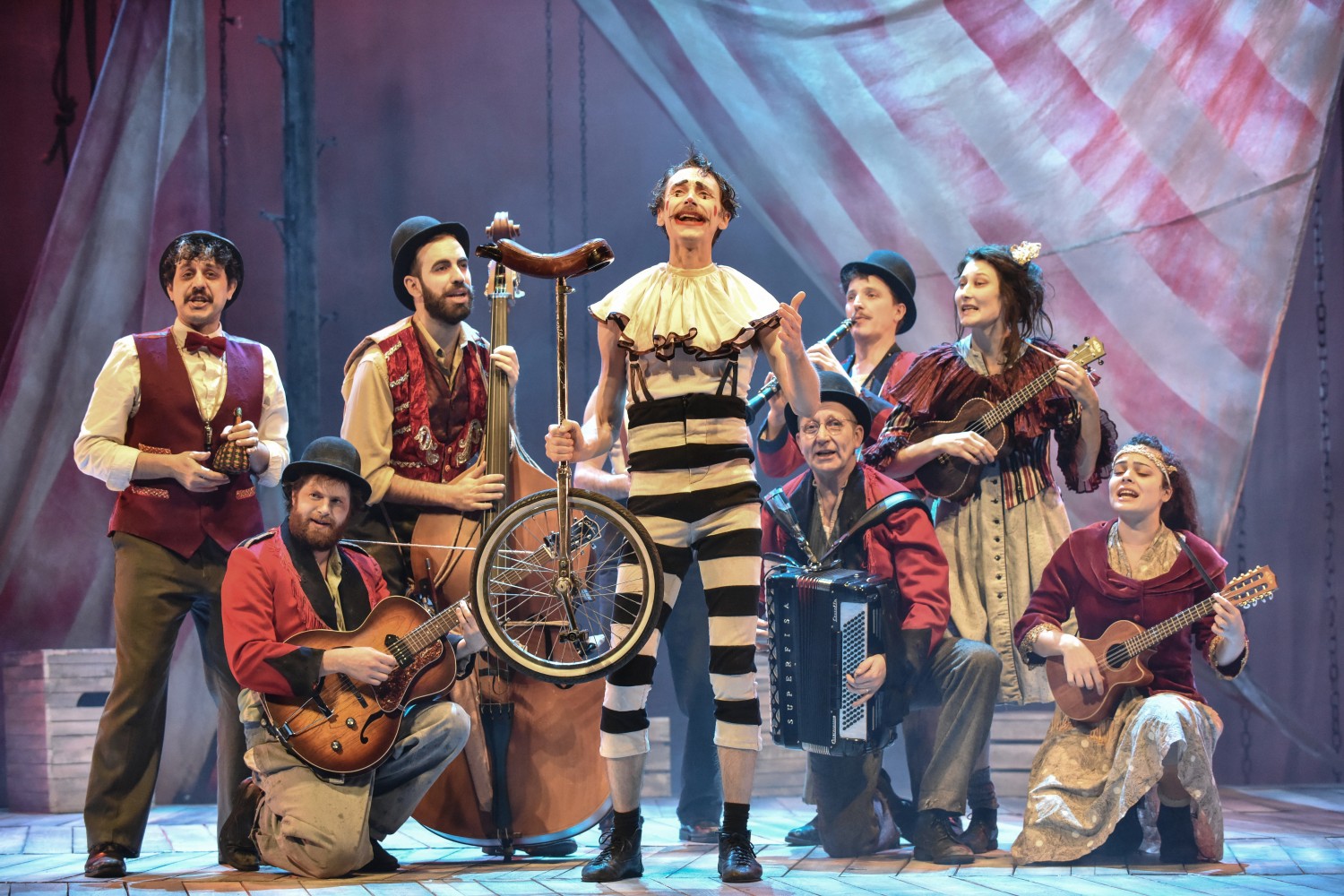 The staging is simple yet effective, performed by a group of actors/musicians that form both the live acoustic band on stage and the ensemble.  It's three leading roles, Zampanò (Stuart Goodwin -  known for his role as Rita's brother in the cult eighties movie "Rita, Sue and Bob Too"), Gelsomina (Audrey Brisson) and Il Matto The Fool, (Bart Soroczynski) all play their characters with such detail, for example, Goodwin induces fear into each audience member from the moment we first meet him, his strongest man act going far beyond just physical strength within is circus act; we see a violent womaniser the audience soon loved to hate. Brisson starts as a shy, almost mute timid little creature that we see blossom into a strong and confident circus act as she meets Il Matto. Soroczynski provides the warmth and comedy of this otherwise dark and dreary storyline, his unicycle and balancing ladder/stilt act being the highlight of the show.  However the real strength comes from the ensemble, moving perfectly in sync to set the scenes, from creating the sea waves with their bodies, to tyre rolling to form both a motorcycle and a car in various scenes, and providing an acoustic set in various scenes.

I found the storyline weak and slow moving.  This was sadly reflected in the vast amounts of empty seats, people leaving early and several negative comments from other audience members both during the interval and at the end of the two hour show, which I have to be honest felt more like four hours.  I rarely leave a show feeling so disappointed but this is a rare example of why some films just don't work on stage.  Unless you're a huge fan of the original movie, I would not rush to see this performance.