What originally started as a CD compilation series which subsequently sold over two million copies after hitting the UK Compilation Album charts, gave the producers the idea of creating a stage musical adaptation.  Universal Music TV managing director Brian Berg saw a niche market for older audience members, who preferred the music from their teenage years.  The decision to create a musical based on the CD complications of the same name (“Dreamboats and Petticoats”) was finalised as it would “enhance the brand” of the popular CD complications.

Dreamboats and Petticoats is a jukebox musical set in Essex in the early sixties featuring popular songs from the fifties and early sixties.

The story starts in an attic bedroom where a grown up Bobby is reminiscing of his youth when granddaughter Daisy finds a record player, (“What's this?!”).  He tells her how he was “almost” the lead singer in a band and the lights change, the attic scene disappears and we meet a teenage Bobby, auditioning for a band in his local Youth Club.  Bobby has pretty much secured the role as lead singer, until a last minute and rather late audition entry bursts in, in the form of cool and confident Norman - who's also an instant hit with the girls of the Youth Club. 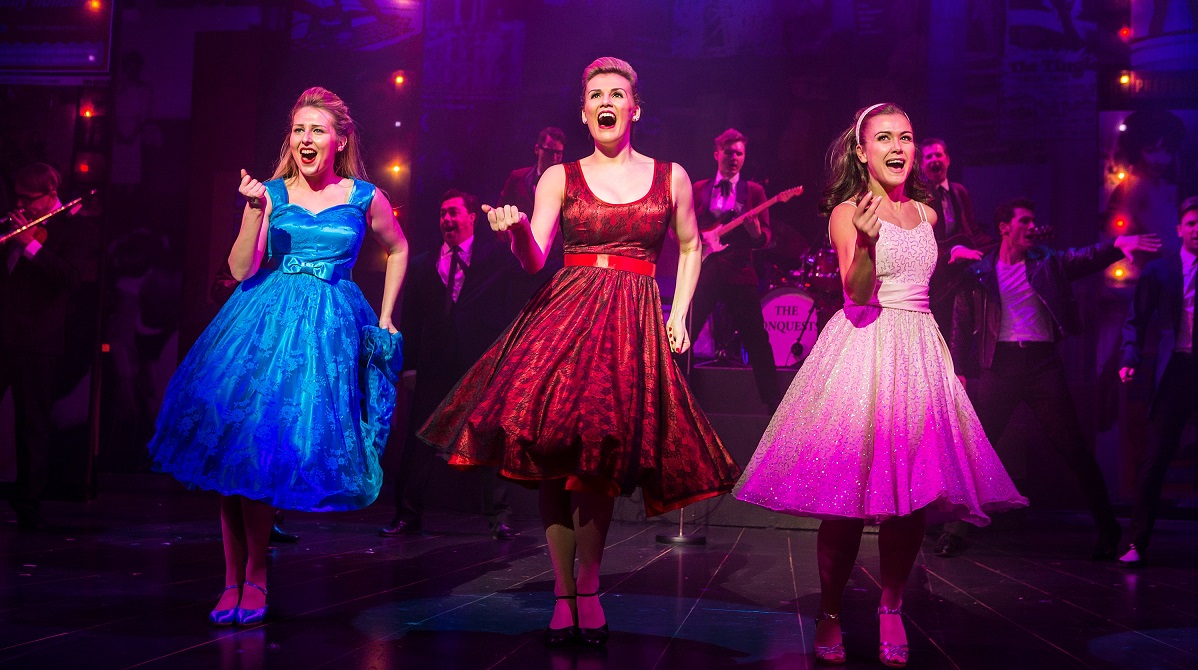 The Youth Club forms the main setting of the story, and we meet a group of teenagers, who although they all know each other, they don't all go to the same schools and have their own little friendship circles within the Youth Club.  There's Bobby, a somewhat geeky but cute clean cut American guy, his best friend Ray, Ray’s younger sister Laura (who fancies the pants off Bobby!), super cool and popular with all the guys Sue, whom Bobby has a crush on, and Donna, Sue’s friend.

Bobby’s dad, who runs the Youth Club, announces to the teens that the Youth Club Association is holding the first National Song Writing Competition.   Bobby and Laura, who share similar tastes in music, agree to write a song together.  The story focuses around the forthcoming competition and the various teen relationships.  Will Laura and Bobby EVER hit it off together?  Will their efforts be enough to get them into the finals of the writing competition?

Filled with non-stop hit songs, including “The Wanderer”, “It’s My Party” and “Teenager in Love” and of course, the title track, Dreamboats and Petticoats is a trip down memory lane for those over a certain age, as seen by the average age of the audience who reminisced whilst singing along throughout the performance.

With the music being played and sung live on stage, the show is guaranteed to get you tapping your toes and wanting to sing along, and with audience participation particularly being encouraged at the finale of the show, it’s a fun filled night out for all ages.

Laura (Elizabeth Carter) and Bobby (Alistair Higgins) really make the show worth seeing; Laura is adorable as the young (not yet “Sweet 16”) as the story starts geeky braces and braids teen hopelessly in love with the equally geeky clean cut Bobby, with Laura’s transformation on her 16th birthday bringing the wow factor to the show.  Gracie Johnson’s professional theatrical debut in the role of Sue’s tag-a-long friend Donna also made for interesting viewing; although her character doesn't come into their own until later on when she gets together with Ray at the funfair.

For me, it was Jimmy Johnston as Bobby’s Dad/Older Bobby I found myself transfixed on throughout.  Although one of the few older cast members, Jimmy certainly didn't let this stop him really getting into all the sixties dance moves.  Maybe it's because he reminded me of a shorter version of Robert Downey Junior that I couldn't take my eyes off him, either way it was Jimmy Johnston that kept my attention held throughout the story.  Although not the strongest storyline in a musical and not my era for music, I definitely left on a high and wishing I HAD experienced life as a teen in the early sixties.