Cameron Mackintosh wants a new musical and fast!  In fact, he wants it ready in just under two hours, and he wants his writers – (the audience) to come up with everything from the location/setting to the themes and influences.  The Showstoppers are a theatre troupe behind the ingenious creation that is “Showstopper: The Improvised Musical” and consist of a group of improvisers – musicians, actors and technicians. Under the auspices of co-directors Adam Meggido and Dylan Emery, the aim is to create immersive, interactive, exciting entertainment both on stage as well as on the radio and television.

Having started out at Edinburgh Festival in 2008, Showstoppers then moved to London’s Kings Head Theatre before transferring to The Drill Hall (London).  It has toured the UK, Ireland, Canada, Singapore, Belgium, Italy and Hong Kong.  In 2011 the show started a series of one-off nights at The Ambassadors and Criterion (London).  In September 2015 the show opened at the Apollo Theatre, Shaftesbury Avenue, which is when I first introduced to the concept of Showstopper: The Improvised Musical during its limited ten week run before transferring to the Lyric Theatre (also on Shaftsbury Avenue) for a series of one-off nights. 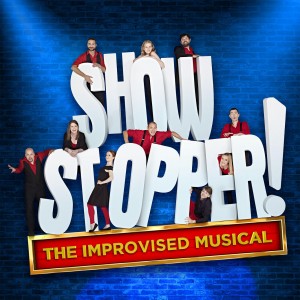 The show starts the same at each performance – a “Director” walks on stage and introduces himself and is interrupted by the loud ringing of a bright red old school landline phone (you know those awkward ones where the curly cable ALWAYS gets tangled up!).   It’s Cameron (Mackintosh), and he is demanding a new musical is put together within a very limited time spot (the same duration as the shows running time).  The Director asks him to hold the phone whilst he asks his “writers” i.e. the audience if they can help him achieve his deadline.   Cue mass outbursts of laughter and a classroom type atmosphere as the Director encourages the audience to put their hands up and shout out their ideas.

Although the overall suggestion is that the show is improvised, after having seen the company in action prior to this evening and speaking to others who have caught the tour at some point, although some level of improvisation is apparent, it’s a lot more scripted than you are led to believe initially.   However, this does not in any way deter from a somewhat unique and unexpected night of laughter, gags, and mayhem.  The cast clearly love what they do and often find it hard to stay in character and not laugh at parts, it has somewhat of a slapstick rushed job of a performance – but that’s the whole point of Showstopper: The Improvised Musical!

With their trademark black and red outfits and a large cast and the occasional prop, expect a night of light hearted humour with some randomly thrown together songs (with equally random lyrics).   Tonight’s performance took the audience to Butlins, Skegness (yes, really L, somewhere you’d have to pay ME to go to!) as chosen by the audience (apparently).  There we met American transfer trainee Redcoat (ironically the cast were perfectly dressed for role) Matilda who ended up falling in love with long time Redcoat Jack.  With several references to local places to Wakefield thrown in for good measure, the story made sure to take the mickey out of all things Northern, much to great joy of the audience.

As with the London performance, there was one stand out cast member, who for me, is always the one to make me laugh out loud (for all the right reasons) the most – Pippa Evans, who is also, ironically, a comedian who has done various radio shows, amongst other things.

Although I didn’t feel the love as much the second time round, I would still recommend that everybody witnesses the award winning brilliance that is Showstopper: The Improvised Musical.  As with a lot of the gangs’ shows, tonight’s performance was a one-off as part of a tour, with the rest of this current tour being predominantly down South.