Supreme Storytelling with multi facets and great honesty, Northern Ballet's interpretation of the English literary classic Jane Eyre, is both beguiling and a homage to all that is - Charlotte Bronte. The ballet, unsurprisingly, was nominated for the South Banks Sky Arts Dance Award in 2017. Choreographer, Cathy Marsden takes the novel from page to stage and creates a beautiful and intensely detailed ballet, with the eye of a novelist, its storytelling is spellbinding. The composer and arranger Philip Feeney uses both his own original compositions and that of others, including 19th Century music by Fanny Mendelssohn, who, like the Bronte's was a female pioneer of her time. Fenney's score commands the production creating tension, romance and chaos, driving the emotion to ever greater heights.

The ballet maintains the integrity of the novel and follows the life of Jane Eyre (Dreda Blow), an orphan living with her rich, abusive aunt and cousins. She is sent to Lowood Institution, a school for girls in which death, disease, and depravity are the norm. She moves to Thornfield Hall to become governess to Adele Varens, whose childhood energy is a joy to behold in Rachael Gillespie’s performance. Jane is enchanted by her mysterious and enigmatic employer, Mr Rochester (Javier Torres) and like any great couple, the two fall in love, are separated in tragic circumstances, but are reunited in the end. Jane Eyre is indeed a love story at its core, but Marston refuses to ignore the darker aspects of the narrative, dedicating a significant portion of the first act to Jane’s abuse, and the death of her only friend, Helen Burns.

Jane is considered my many, an early feminist as she battles the society that suppresses her, she also battles her own inner demons. Marston has highlighted this by creating the D-Men (a play on words), male dancers who inhabit and bring to life the fears and insecurities within Jane as well as the 'death' that follows her. This dark and menacing tone is enhanced by the simplistic yet, effective set which is free from props and clutter. The open space this creates allows for representation and transformation and invites the audience to interpret their own imaginative locations. Simple non naturalistic cloths are used and drawn across the stage with stately importance. Their grey colour reflects the austerity of Lowood and the bleakness of the moors. 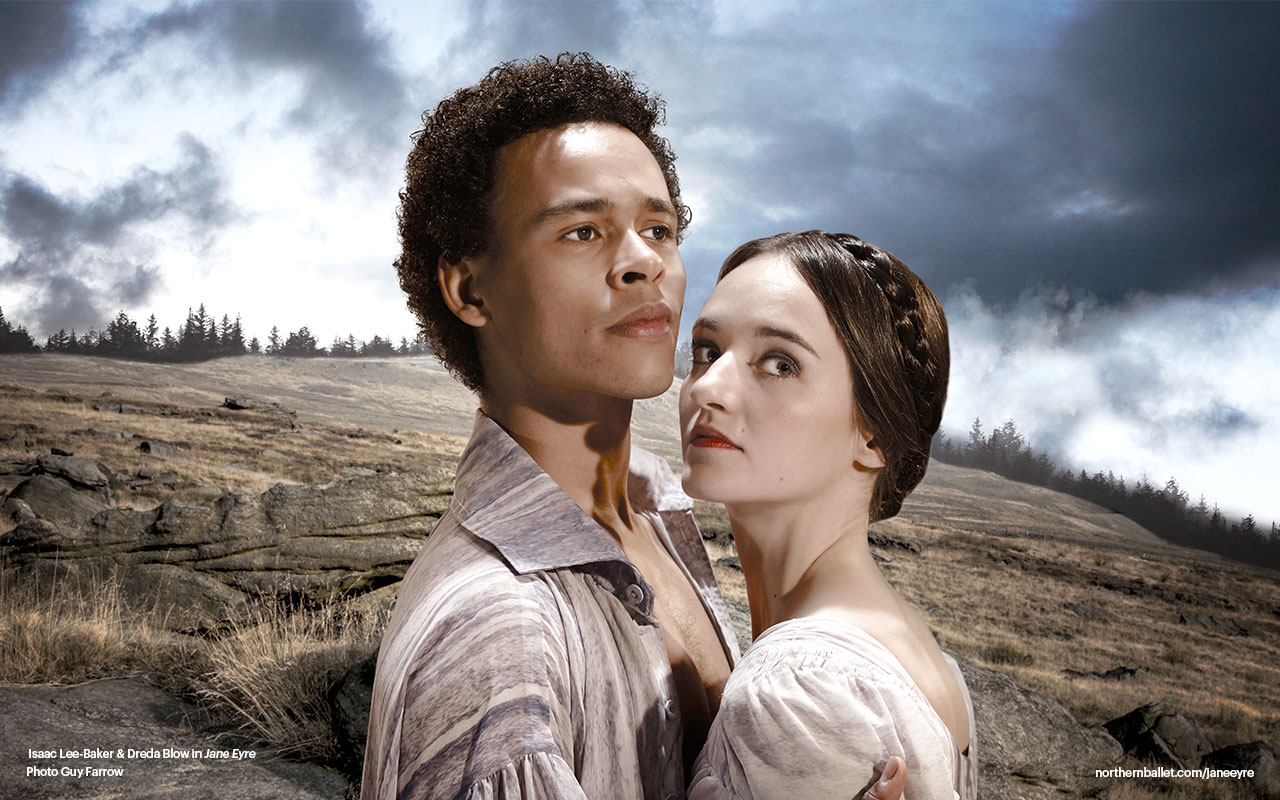 Dreda Blow in the title role (Jane Eyre) is simple breath-taking, and we are from the very first moment, sympathetic and empathic to her journey. Marston's choreographic blend of contemporary with the classic is the perfect vehicle for Blow to bring Jane Eyre to the modern audience.

Javier Torres' Mr Rochester is every bit the archetypal hero but not in the 'Knight on a white charger' sense. He is mean, moody and magnetic and cruel to the point of compulsion. Yet, Torres' Rochester has a venerability that forces us to look at the internal essence of the man as well as the external appearance.

The chemistry between the two lead characters is almost tangible, the initial pas de deux is tentative, almost awkward, owing to Blow’s deliberately non fluid, guarded movement and motifs, thus demonstrating Rochester’s intimidation of Jane. The style of dance becomes more classical in style as their relationship grows. By the end of the ballet they are consolidated in a beautiful dénouement, repeating motif from their first encounter in reversed roles, highlighting the now dependence of Rochester upon Jane.

Another highlight of the ballet has to be Rochester's mad, first wife Bertha’s fierce and contemporary dance style. This is mirrored in her wild hair, torn red dress, and bare feet. Victoria Sibson’s (Bertha Mason) chaotic and animalistic dancing adds a level of uncertainty to the performance which keeps the audience on the edge of their seats. Rochester’s desperation to save her during the fire at Thornfield adds a sense of tragedy and an empathy towards him.

The truth of this ballet is mesmerising, it is storytelling at its finest in every aspect of the production. It's depth and honesty; its historical and cultural understanding of an era and its direct approach to the dark issues within the novel are awe-inspiring. I was totally riveted from the opening to the fall of the curtain. I have never been so engaged and engrossed in a ballet before, I really didn't want it to end. Jane Eyre has everything you expect of a ballet but so, so much more. Do not miss this one, it is a tour de force and a classic in the making.