The Girl On The Train - West Yorkshire Playhouse, Leeds

I think the definition of a successful, contemporary novel would be the sheer fact that within three years of being published, the novel has been adapted into a box office success and now a stage adaptation at West Yorkshire Playhouse. Paula Hawkins’ novel The Girl on the Train has all the elements that could electrify any stage or cinema screen, with a thriller based narrative built around a dark murder, and a personal reflection on our own individual power struggles within our own individual minds. Rachel Wagstaff and Duncan Abel’s daring adaptation of The Girl on the Train is starting its professional run at West Yorkshire Playhouse in Leeds. It will then continue on a national tour, which will no doubt attract huge audiences due to the sheer success of the original 2015 novel.

What I found most lacking in the adapted stage narrative, was the removal of the core basis of the novel. Paula Hawkins wrote perhaps one of the most relatable novels of its time, an honest example of isolation in the modern world and the need to rise to the standards of others. The novel, film and stage adaptation follows the dark mind of a hopeless female protagonist, Rachel Watson (played by Jill Halfpenny on stage). This character spends her days on a commuter train, staring out of the windows at the ‘perfect’ lives of others, only fuelling the isolation and despair she feels every day. 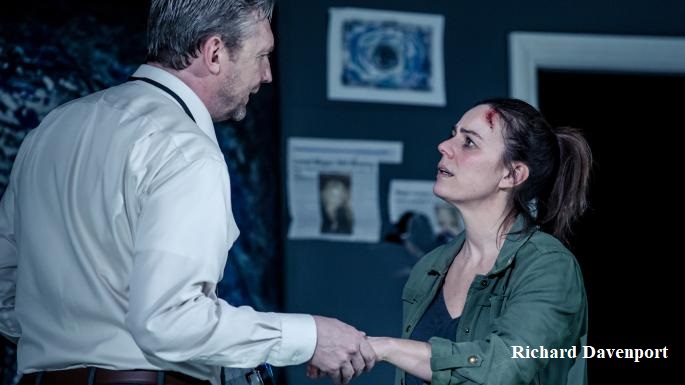 This crucial narrative element was simply lost within this stage adaptation, with the only reference of these lonely moments shown by brief digital protections of a train window, showing only a glimpse of this woman’s defeated reflection.

We first see Rachel Watson at her lowest point; hungover, half-naked, beaten and most importantly, with huge gaps in her memory. Her morning is only made more devastating with the news of a local woman named Megan (Florence Hall) murdered, with Rachel one of the last people seen in the area that evening. Again, in the novel the connection between Rachel and Megan is pivotal to Rachel’s self-loathing, as she spends her commute obsessively watching Megan, fantasising of her ‘perfect’ life and how happy she must be. However, in last night’s performance this large chunk of context to Rachel’s current state was a simple comment within a passing conversation, one of many passing conversations throughout the evening.

Last night’s performance of The Girl on the Train did showcase some incredible talent within theatre, with an incredibly strong ensemble of actors, unfortunately hindered by a script lacking pace tied together by a number of repetitive flashbacks. Jill Halfpenny communicated an overwhelmed, broken character who was close to giving up on herself, until this new challenge motivated her to find the truth. I found her exhausted tone and physical portrayal to be relatable to us all at some point in our lives. Rachel Watson also managed to break out of the monotonous pace of the narrative with an incredibly tender monologue, providing the surprising context for her character and captivating the audience.

When I first saw Lily Arnold’s innovative set design of a simplistic train carriage doubled as a contemporary apartment I was excited for the inventive interpretation I was about to witness. Unfortunately, it only took the first twenty minutes for me to grasp the concept of the entire play taking place in this one, simplistic room with repetitive dialogue lacking the tension, emotional dynamics and sense of thrill required to excite this simplistic visual concept