Made In Dagenham - Phoenix Theatre, Castleford

Based on the 2010 film and centring around the Ford factory strike of 1968, 'Made in Dagenham' is the story based on the real life events that led up to the Equality Pay Act of 1970. As the female machinists in the factory were downgraded to 'unskilled' workers, the fight escalated into a full on war against the government and Trade Unions to secure equal pay for all workers regardless of gender.

'It's not about money it's about equality!' This small group of women, like all ground breakers, found that the battle had to be won in their home lives as well as the factory floor. As the principal character encapsulates with her poignant line in response to her young daughter's career choice, ‘I laughed at her when she wanted to be a Doctor and bought her a nurses outfit instead', but this was an era of change, a time when woman stood up and fought for their rights to earn more than 'pin money'. A time to change perceptions and to change history whatever the cost.

'Made in Dagenham' has all the ingredients of a gritty drama and the Encore cast did not romanticise this. As like many theatrical societies, females are in the majority and this show was a perfect choice for this group. The multitude of strong female roles, allowed some of the more experienced ladies to shine. The protagonist, machinist Rita O'Grady was played with complete conviction by Eleanor Aidous. Adious was impressive in both poignant and rousing moments and her acting painted intricately, the inter trauma of her decisions. Her initially bumbling husband, Eddie (Lee Gray) played the perfect nemesis with the connection between them that was unbreakable and almost tangible. Gray's emotive delivery of 'The Letter' was the highlight of the show for me, as we were forced to see the male viewpoint of the change in women's roles. 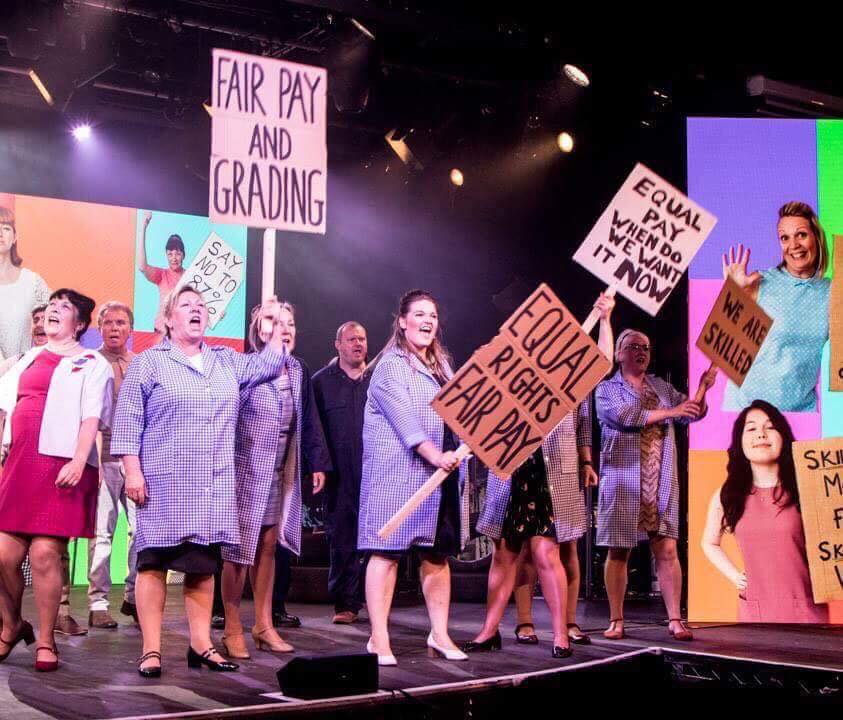 Gray was pitched perfectly and his acting through song was exquisite. Rita's factory friends were a real motley crew! - Cass (Alice Fearnley), Claire (Claire Heins) and Emma (Nicole Walton-Turek), each were very entertainingly....individual. Special mention must go to Sandra played by Sophie Moss whose sass and vocal gymnastics where wonderful and the hilarious Beryl (Alex Bush). Bush's comedic timing of a very well written character was fabulous and her 'colourful' language was both authentic and realistic. Well done Alex, you are one to watch out for!

Bev Maher as Barbara Castle put the character into caricature! A sterling performance aided by Ralph Jagger as The Prime Minister, Harold Wilson, these two made the perfect comedic couple. The comedy within the 'book' by Richard Bean is perfectly pitched to juxtapose the deep seated pathos, the wit and humour serve to give realism whilst communicating the powerfully emotive themes. Vikki Vaughan gave a strong performance as the intelligent, likeable and 'trapped'; same issues - different class system; Lisa Hopkins, the wife of the Director of Ford, Dagenham. Vaughan worked tirelessly and with ease to establish the solidarity of ALL women at this time. Difficult role, well portrayed.

The female ensemble were colourful, convincing and individual, their engagement and harmony work was beautiful. Sarah Cowley (Musical Director) did a wonderful job. Joined on stage by an eleven-strong male ensemble the choral work was well balanced and emotive. The fluency of scene transitions were notable and well staged and allowed the show to flow at speed. As a very fragmented show this was a feat!

One of the most striking things about this production is the Director's (Andy Lunn) understanding of the 'whole' aesthetic package. There were some wonderful staging, such as the use of a ladder with platform which added impact and the visual images pre-recorded using AV (footage by Nicole Walton-Turek and Andy Lunn). The lighting and LED screen worked together and showed the power of media to create a mood, tone and story not only to support the actors on stage but to drive them. Skilled technical designers are artists and that was proven tonight. The technical elements were neither obnoxious or lewd but subtle and in sync. With the strong understanding of the director's vision. Made in Dagenham had a strong sense of tight management with a Director who really did have their finger on the pulse of the show.

From the authentic 60's costumes and opening characterised safety announcement, to the period advertising on the LED screen - Made in Dagenham transports us in a 'Ford Cortina'; of course; to the factory floor, then takes us on the Houses of Parliament, the rousing TUC conference in Eastbourne; with a stop off or two at a friend's home and a swift 'Babycham' in the club; all at break neck speed. The finale scene, Rita's address to the TUC conference asks women to 'stand up' and that is exactly what the audience did tonight, in support of the cause and of Encore, the company! A wonderfully enlightening, comedic, emotional and uplifting night’s entertainment. If you haven't seen this show, you are missing a treat!