One Flew Over the Cuckoo’s Nest - Crucible Theatre, Sheffield

I had a contrast of feeling sat in my seat waiting to watch Sheffield Theatres latest performance of One Flew Over the Cuckoo’s Nest. This is due to the sheer admiration I have for the powerful theme of individual freedom of expression witnessed in the 1975 film of the same title.

I was incredibly excited to see a professional production of such an iconic narrative, yet hesitant to witness how they could portray such sensitive and shocking experiences live on stage. Dale Wasserman’s stage adaption first opened off-Broadway in 1963, following the 1962 novel that was written by author Ken Kesey to directly attack the way psychology and psychiatry were being approached in America during the 1960’s. Kesey commented on his firm belief that many inmates are simply labelled as ‘insane’ when in fact they simply do not fit the conventional idea of how people should behave. I think this concept is relatable for a wide audience and explains the warm reception and standing ovation the play received at the Crucible Theatre last night. 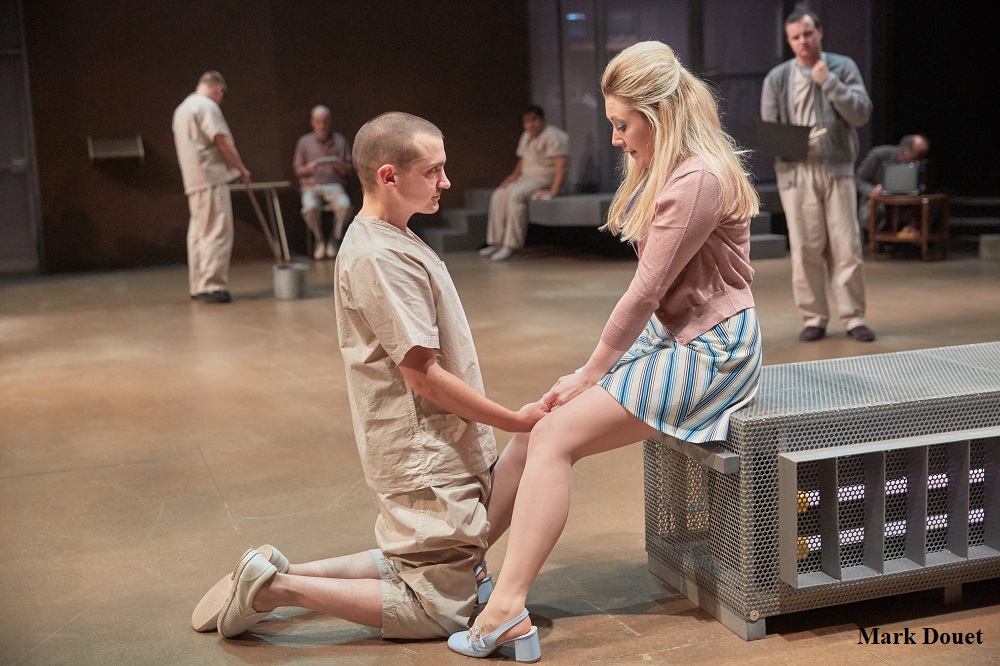 The drama began with an incredibly sparse, open, thrust stage, ingeniously designed by Lucy Osborne. We were immediately transported into the dreary atmosphere of a run-down psychiatric hospital and felt an instant sympathetic connection with the characters that appeared before us. The space was skilfully utilised, with the lighting design by Johanna Town providing subtle manipulation of our eye line and focus. With the use of lighting reveals, we were often influenced to observe the day-to-day routine of not only the patients in the institution but also the staff. This provided an insight into the level of neglect and manipulation experienced by the leading characters, further building our compassion towards them.

Joel Gillman entered the stage as a burst of energy in his role of Randle P McMurphy. Gillman adapted this role with a stark contrast to the famous portrayal by Jack Nicholson in the 1975 film. Gillman chose to keep the role quick paced with mischievous yet intriguing interactions with those around him. For me, this was a bold decision as the audience may have been expecting the relaxed, cool and sarcastic McMurphy we have previously understood by Nicholson. Gillman committed to the role with outstanding energy and built an excellent rapport with Jenny Livsey in her role of Nurse Ratched. Ignoring the occasional glances at a well-disguised script, the audience would not have known that Livsey took over this role only 2 days prior to the performance, her subtle manipulation and powerful resentment towards the leading McMurphy haunted every moment Livsey appeared on stage.

Javaad Alipoor unquestionably succeeded in casting an outstanding cast for this harrowing tale, with every performer on stage advancing his directorial concept and captivating my attention in their role. Jack Tarlton radiantly blurred the lines of what is ‘sane’ and ‘insane’ through his portrayal of Harding whilst Jeremy Proulx brought life and context to his role of Chief Bromden, a seemingly deaf and dumb patient who is observing every minute of this monotonous routine.

A story such as One Flew Over the Cuckoo’s Nest is always going to be a challenge to portray live, due to the pivotal moments all residing in the concluding moments. With such a string of tragic events all taking place within seconds of each other, the audience feel slightly stunned and unable to fully comprehend the repercussions yet to come. Despite this directorial challenge, the sheer talent of the performers on stage was arguably the most commanding element of the entire evening.