The ambition of this project is anything but little, and mighty fierce! The beautiful ‘pop-up’ venue, Shakespeare’s Rose Theatre (which takes its inspiration from the London Rose Playhouse built in 1587), commands your attention. It is an impressive journey back in time to the Elizabethan era, with the playhouse constructed alongside local historic buildings, such as Clifford’s Tower, the Castle Museum, and the medieval City Walls.

Moreover, the mock Elizabethan village surrounding the theatre has been meticulously created. One can appreciate its historical intricacies, from heads on pikes, pigeons roosting in the rafters, and even a wooden bear! Going to see a production at the Shakespeare Rose is not therefore simply another theatre trip, but a complete experience.

The company has produced four plays in repertory for this summer in York. These are: Macbeth, Romeo and Juliet, Richard III, and A Midsummer Night’s Dream. The latter of which remains possibly Shakespeare’s most beloved and accessible comedy. To prove my point, I would suggest that if you’re a fan of ITV’s Love Island, you will find something to enjoy in this story. Four young Athenians – Lysander, Demetrius, Helena, and Hermia – all want to find love, but the problem is coupling up! Lysander loves Hermia, but her father, who doesn’t approve of the match, wants Hermia to marry Demetrius. 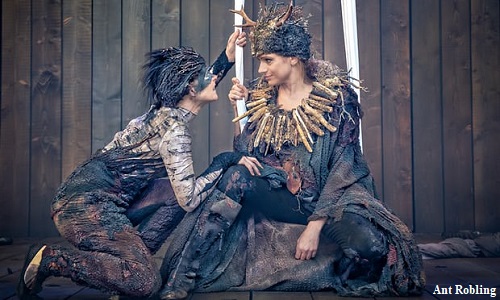 Demetrius, in turn, is loved by Helena. The four young lovers escape from the city to a forest, where a world of fairies, love potions, and recoupling awaits! Cue Ian Stirling… I mean Puck…!

But if you’re not a fan of Love Island, you will still find lots to enjoy in this production. For it is Shakespeare done simply and effectively. The actors make full use of the space, and the fairies jump and ‘fly’ throughout the audience. The energy and suppleness of these actors was impressive, as they created a forest world with their physicality and squawking calls. Maria Gray as Cobweb was particularly stunning, slinking with ease to sneak up on characters, and dance in the air with the aid of a hoop and of aerial silks. To transform the stage into the forest, costume designer Sara Perks does a wonderful job creating costumes which mimic the colour and texture of the forest foliage. A small but effective orchestra plays enchanting music to underscore the emotional drama.

Though this production is accessible and enjoyable, it lacked vibrancy. Being the only comedy in the repertory catalogue, it would have been nice to see more magic and colour, to contrast to the darker feel and tones of the other plays with the summery brightness of Dream. Furthermore, creating the forest purely through costume and physicality, though impressive, was neither wholly absorbing nor transformative. This was a shame, as one aspect of the play which I had been looking forward to, and which makes the play so everlasting, is its sense of colour and vibrancy.

As part of the more general ‘Shakespeare experience’, therefore, the play is perfect for both Shakespeare newcomers and aficionados. While some visitors may find the crowds and play’s length a little taxing, those wishing to learn about the world of Shakespeare will find much to be pleased with.