Buckle up for an electrifying take on Shakespeare’s historical play, produced by Lunchbox Theatrical Productions as part of the Shakespeare’s Rose Theatre project in York for this summer. The play documents the Machiavellian scheming, the steady rise to power, and the ultimate defeat and death of Richard, Duke of Gloucester, known to history as King Richard III.

There has never been a time when such a play was not timely. Moreover, the themes of political hypocrisy, lying, corruption, and self-interest at the heart of power have unfortunate relevance to contemporary politics. Shakespeare has much to teach us about the nature and corrupting influence of power, about how political followers abandon their integrity in the hopes of future rewards, and about how even kings suffer from wishful thinking and self-deception. Above all, however, it is a study of the dangers of charismatic personalities in politics, with Richard dazzling his supporters into doing his bidding even when he demands the most reprehensible of acts. 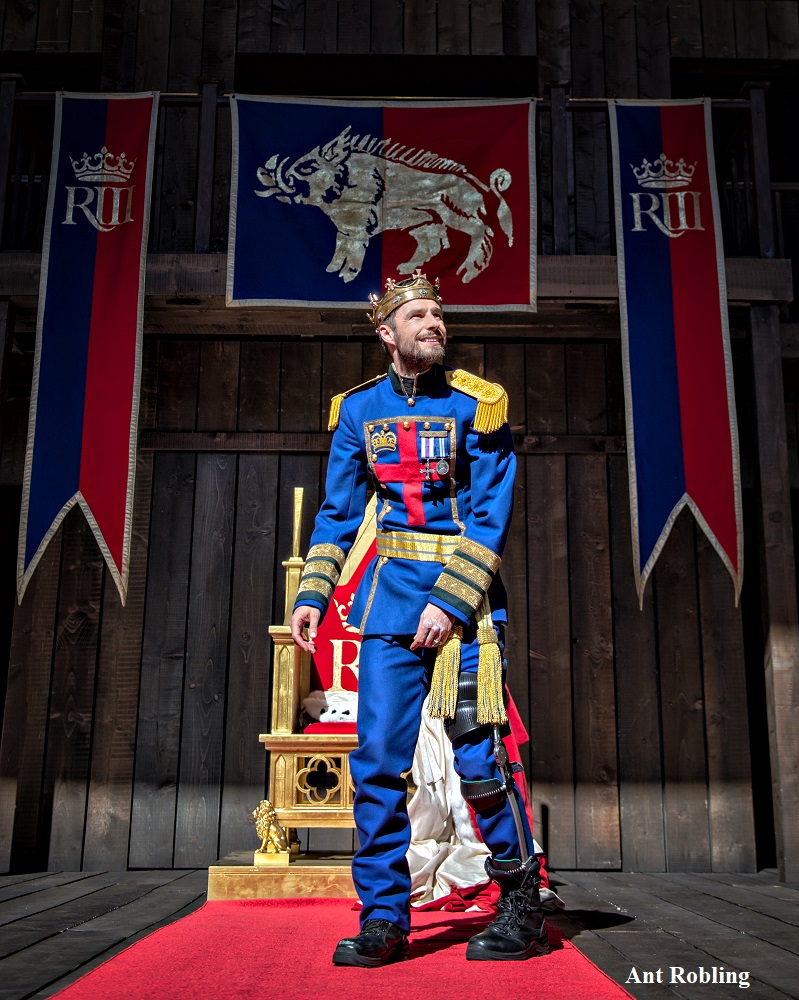 This might give the mistaken impression that the production is po-faced and sombre. Quite the opposite is true. Lindsay Posner’s direction blends an Elizabethan sensibility with contemporary aesthetics, with the costumes, the props, and the use of lighting and music all jolting the play into the modern era. There is a lightness of touch here that is enviable, as each of these elements could easily overstep the mark into gimmickry. This is never the case, and the audience steps into the world of the play very easily, and with a smile. Similarly, the performances are wonderful and reflect a wry sense of humour.

Dyfan Dwyfor’s Richard is a magnetic stage presence who immediately gets the audience on his side, even when he is confiding how he plans to have his enemies imprisoned and killed; Richard’s declining mental state is brilliantly captured in his physicality, and Dwyfor’s spontaneity on stage adds to Richard’s engaging funny charisma. In addition, an interesting theme developed in this production is the role of female characters as casualties of the political intrigues of the royal court, and the female members of the cast do much to bring this tragic sense of anger, grief, and marginalisation to the dialogue.

The principal issue with the production is that there is simply too much of it. It is one of Shakespeare’s longest plays, and at a performance time of over three hours is the longest of plays produced by Shakespeare’s Rose Theatre. And while Shakespeare may be the God of theatre, he is not unassailable in this regard (as someone once said, brevity is the soul of wit). And while it might be heretical to say so, some scenes do drag as the characters reiterate the same point over and over again. An abridged version of the play would therefore have been welcome. However, the performers do an excellent job of maintaining their energy and keeping the audience engaged well into the second act. There is more than enough in this production to captivate a casual audience with superlative direction and electrifying performances. It is well worth everyone’s time.