Premiering in London in 1916, Harold Brighouse’s comedy, set in a boot shop, has appropriately earned its status as a mini-masterpiece. This production, by The Lamproom Theatre Company, Barnsley was not dissimilar to stepping into new shoes – stiff and slow-going at first but eventually wearing in to be the perfect fit. This production does a stellar job of reassessing the play’s mix of northern humour and the (unfortunately) still prominent socially contentious issue of women exercising power and authority over men.

The money-mad domain of Salford tradesman Horatio Hobson is immediately apparent in John Kelly’s direction and Phil Shepherd's set design, which, along with Garry Hunt’s lighting, conjures the glow of hard-earned middle-class prosperity. 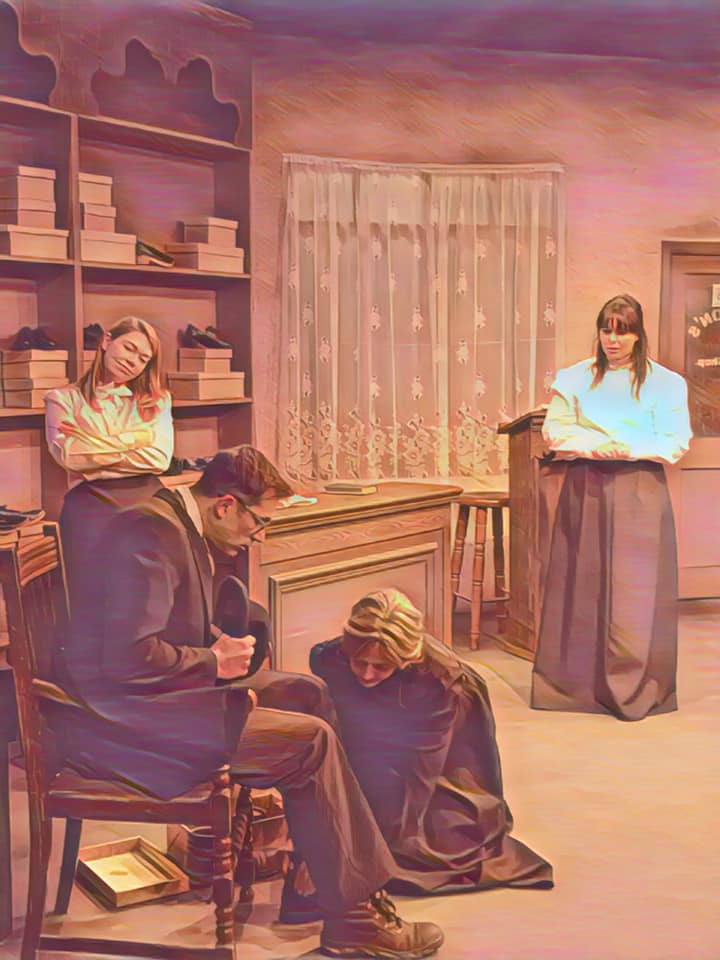 But whilst the production focuses on character and plot development rather than easy laughs, it takes time for the actors to get into their stride. Steve Tasker as Hobson certainly does ‘cobble’ the comedy out from the patriarchal relationship with his three discourteous daughters, all of whom are determined to flee the nest despite protests from the rotund chap. Later, however, the old drunkard displays a poignant King Lear-like figure when, helpless and economically impotent, he concedes to the proto-feminist values of his eldest, the “uppish” Maggie played by Sally Moxon.

Moxon was excellent throughout - Holding the entire household under her thumb while transforming Ryan Howe’s charming William Mossop from a business opportunity into a husband. She oozed inner confidence. Ryan as Mossop, develops as the piece does – partially because of the writing – but by act 4 he displays remarkable confidence – Sheer contrast to that of the Mossop we are first introduced to.

Jo Upson and Sarah Valleta as Alice and Vickey respectively are a perfect double act. Supporting actors such as Richard Wood as Lawyer Albert Prosser and Tina Green as Mrs Hepworth are all sharply drawn. However I felt that the pace of the piece needed to increase, particularly towards the latter end of act 2.

This production is well worth a watch and I am sure the piece will develop as the run goes on. Book now by visiting www.barnsleylamproom.com Catch it until Saturday 3rd November 2018.