Jane Austen’s classic story is reinvented once more at the York Theatre Royal this November, adapted for the stage by Jessica Swale and directed by Juliet Forster as part of The Lakes Season, a rep season from Theatre by the Lake in which ten actors present four different plays over twelve days.

For those unfamiliar with Austen’s novel, the plot focuses on the Dashwood sisters: the impulsive Marianne (Alice Imelda) and the reserved Elinor (Sarah Kempton), who find themselves ejected from their father’s estate upon his death and, together with their mother (Karen Ascoe) and mischievous younger sister Margaret (Lydea Perkins), are forced to decamp to a draughty cottage in the darkest depths of Devonshire. With little money for their dowries and nothing to recommend them to potential suitors, the girls have no reason to be hopeful about the future, until they attract the attention of the local gentlefolk, in the form of the roguish Willoughby (Oliver Mott), the straight-laced Colonel Brandon (Thomas Richardson) and the irrepressible Mrs Jennings (Christine Entwiste) who is addicted to finding suitors for young ladies. Love, heartbreak, and regret ensue, but it’s the relationship between Elinor and Marianne that stands the test of emotional upheaval. Their love for one another is the core of the story. 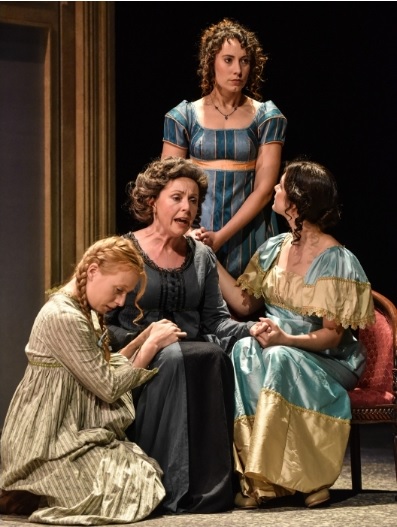 The lead actors give grounded and increasingly endearing performances as the two main Dashwood sisters, providing some warmth to characters who could easily come across as naïve and standoffish. However, Lydea Perkins steals the show as the youngest Dashwood sister, providing both comedy and a sympathetic ear for the other characters in a role which could easily have been overlooked. Likewise, Christine Entwistle chews the scenery as the socially disastrous Mrs Jennings, and when either of these characters is on stage there is never a dull moment.

The costumes are sumptuous and the movement choreography, including dancing and sword fights, is sublime. Moreover, the set design is minimal but makes inventive use of lighting and the whole performance space in order to conjure several very different locations, from an isolated Devonshire beach to the bustling heart of London. These aspects of the production combine to create a wonderfully atmospheric drama, peppered throughout with moments of comedy. Indeed, one of the most surprising elements here is the humour, which leans towards farcical but in a way that elicited plenty of smiles and laughs from the audience. There is a temptation that, to be taken seriously, any bonnets-and-corsets period drama must today veer towards a darker, more gothic or oppressive interpretation of Austen’s social world. Thankfully this impulse has been resisted here. The production is full of sunshine while losing none of Austen’s trademark social satire, psychological insight and caustic wit.

The production, as delightful as it was, could be seen as being a little too drawn out. At a running time of three hours and five minutes (including an interval), there are several moments where the fat could easily have been trimmed and the narrative tightened. Several scenes do run on for inordinate lengths of time and one suspects the audience’s attention starts to wander. Similarly, the dialogue often feels perfunctory and there are several scenes in which showing would have been better than telling. These are minor complaints however, with a production that was, on the whole, hugely enjoyable and which will undoubtedly win admirers beyond the club of Austen enthusiasts.