Adapted from the 1977 film, Saturday Night Fever tells the story of Tony Manero, a young man who works in a paint shop, lives with his parents and longs to be a dancer. He lives for the weekend when he can head on down to the 2001 Odyssey with his friends and show off his moves.

The film was a surprise hit, launching the career of John Travolta and catapulting the Bee Gees to legend status. So with a fairly wishy washy plot it’s clear to see that the popularity focused on the charismatic male lead, the ‘hit after hit’ soundtrack and the DANCING.

Bill Kenwright’s tour offers a big production with an excellent band of six, impressive moving set and huge cast of twenty two. The costumes are great, the disco-balls a plenty and the light up floor effective.

When the cast flood the stage to perform the dance numbers it's a delight. This is a talented cast of dancers, brimming with energy and technical skill. Bill Deamer’s choreography is at times a little repetitive but hey, that’s disco! 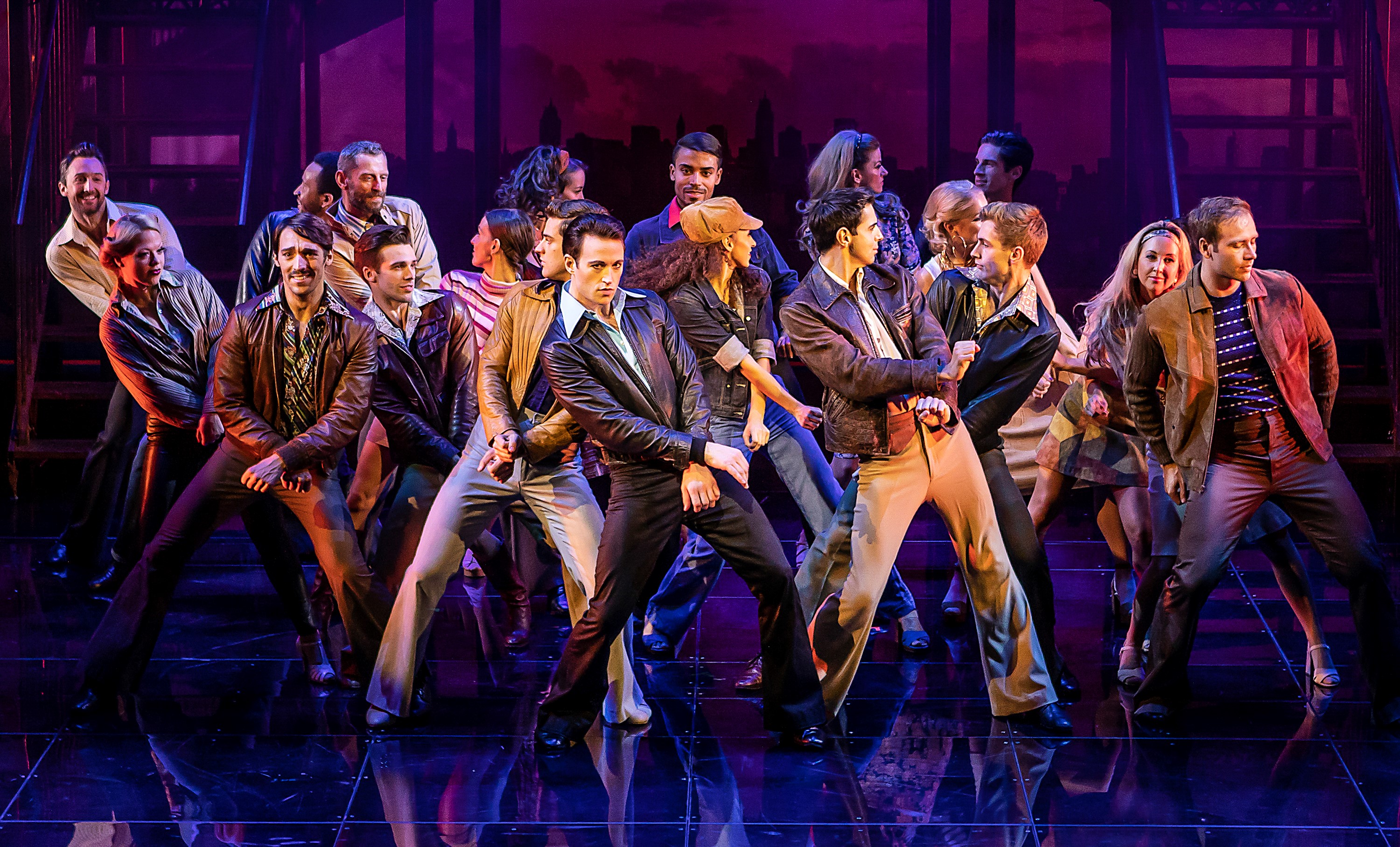 Edward Handoll, Alastair Hill and Matt Faull perform as the Bee Gees on a central platform at the back, doing an excellent job (despite sporting what can only be described as the worst wigs ever). For the majority of the first act they sing all of the songs alone, so when actors begin to sing the odd number it’s incredibly jarring and unnecessary. No matter the vocal talent of the actors it somehow muddied the line between staged film with live music and musical. It would have worked far better with the Bee Gees singing alone throughout and more dancing to fill the stage!

Richard Winsor as Toby Manero danced with confidence and charm. He acted the part well, bringing naturalism to a cheesy show and gave the audience a reason to hoot and whistle in the section which can only be described as “slowly and sensually changing into a white suit” giving the audience a Tuesday night treat.

With the music and dancing both filling expectations the real thing that this show lacked was a heart. The dialogue was clunky and dry, the accents dodgy and the family scenes with Tony’s parents were frankly painful to watch. The performers, music and lights all lead the way for a jolly old 70’s dance show so when trying to portray difficult or emotional scenes or any real plot it just felt awkward and I couldn’t wait for the next section of mindless fun and disco dancing. The performers were great but clearly many of them were predominantly dancers rather than actors and certain moments really showed up these weaknesses.

The script was near word to word from the film and although important not to alter such a classic too much so as not to disappoint die hard fans, certain tweaks could have been made to allow this to feel more suitable for 2019 without taking anything away from the story. There are quite a few moments where our hero and protagonist is quite simply vile towards women. Towards the end of the show he actually assaults a woman and is never held accountable for it. When he goes to visit her following this incident she asks him to stand far away from her because she is afraid that he will try to assault her again. Despite this they immediately decide to be ‘friends’ singing a sweet love song whilst other couples join them on stage to look on happily. It would not have needed much tweaking for this to not be so problematic in today’s social climate and I think that theatre makers have a responsibility to have this awareness when making work.

Overall this show is great night out for fans of the film brimming with colour, energy and the feeling that you should be dancing- yeah.