Malory Towers is marvellous and magical. But that was to be expected. Fresh from their wonderful performance of Wise Children earlier this year, Malory Towers is co-produced by Emma Rice’s Wise Children outfit and the York Theatre Royal in association with the Bristol Old Vic. It’s based on Enid Blyton’s timeless novels for children and is adapted and directed by Rice (the former artistic director of Shakespeare’s Globe). With a pedigree like that, the production was always going to be superlative. What was not expected is how it manages to be at once hilarious, heartfelt and exquisitely entertaining.

The story is a twist on the classic Enid Blyton tale of a young, gawky schoolgirl – Mary Lou Atkinson (Rose Shalloo) – being transported to a remote boarding school on the south coast of England. Once there, she meets an array of characters, including the courageous but anger-prone Darrell (Izuka Hoyle), the jokester Alicia (Renee Lamb), the hyper-organised Sally (Francesca Mills), the musical Irene (Mirabelle Gremaud), the prickly spoilt Gwendoline (Rebecca Collingwood), and Bill (trans actor Vinnie Heaven), a contemporary interpretation of the Blyton trope of a girl who acts and dresses like a boy. 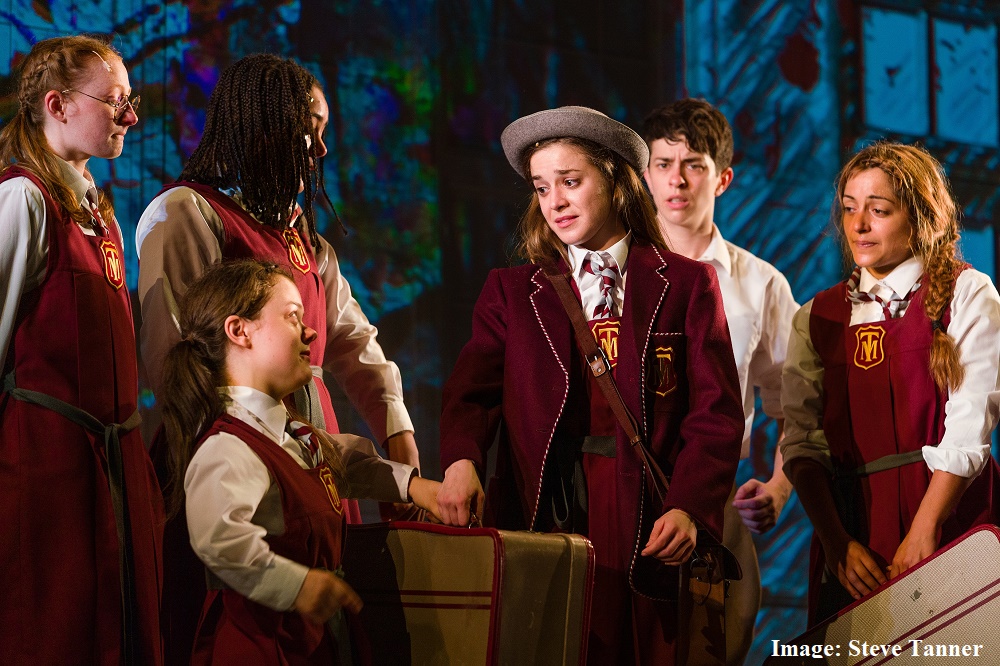 Together, they go swimming, have midnight adventures, put on a school version of Shakespeare’s A Midsummer Night’s Dream, and do the occasional schoolwork.

This may not sound particularly exciting to a modern audience. But the germ of the story is the fresh and playful tone which Rice gives the material, with plenty of music, singing, dancing, inventive use of technology and stage direction, and an abundance of wit. Beneath the song and dance, however, Blyton’s simple but profound message that it’s better to be kind than to be cruel shines through and is enhanced rather than suffocated by the love that has gone into this production.

The cast are all magnificent and work together terrifically well, including Stephanie Hockley in the side-role of pianist. Each of the actors manages to find both the comic and dramatic element in their characters and deepen both as the play goes on. A special mention must be given to Francesca Mills, who often steals the show with her comic timing and physical humour, and to Rebecca Collingwood, who manages to balance the right amounts of hatefulness and vulnerability to create a surprisingly memorable character.

The music is joyful and one of the key elements of the show. Many of the performers have a musical background, and this shines through in the wonderful set-pieces organised by composer Ian Ross. The set design is simple but effective, and the use of projection and animation makes the simple stage appear as a railway station, the school, a cliff-top in the middle of the night, or a modern classroom. It accomplishes what the best set design sets out to do by engaging the audience’s imagination in a way that puts a smile on everyone’s face.

The production’s only shortcoming is that it suffers in comparison with its predecessor. Wise Children was a tour de force, and some might say Malory Towers exists in its shadow. However, that is perhaps unfair. The characterisation here is stronger and while the production is less of a visual feast, it is stronger in other areas. It is also more likely to be enjoyed by a range of audiences, from veteran Enid Blyton readers to those younger children just encountering her work for the first time. Personally, we can’t wait to board the next train to Malory Towers.