There’s no ‘cool’ way to talk about mental health. There’s no trendy angle or hot-take. It is what it is. Messy. Complex. Difficult. Real. Reasons to Stay Alive is all of those things, yet refracted through an oddly inviting, refreshingly amusing and beautifully effervescent lens. It sometimes feels like a school play, but one of striking professionalism and a thorough theatrical intelligence.

April De Angelis’ text adaptation of Matt Haig’s book offers an admirably palatable shape and structure. The simple but effective trope of staging younger and older versions of a character are handled well, with some moments of remarkable textual navigation. Younger Matt (Mike Noble) and Older Matt’s (Phil Cheadle) back-and-forths are often comical and used for storytelling pragmatism, but never does De Angelis use it as a device to hide behind for sake of ease and simplicity, and it decorates the piece aptly. 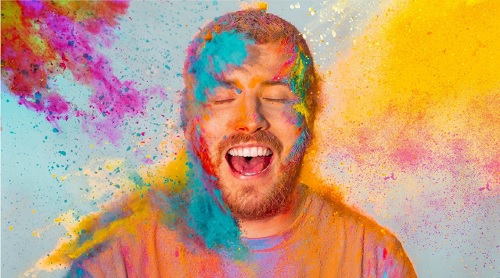 Jonathan Watkins’ direction is also worth noting. Again, some more basic theatrical devices are used but used intelligently. Credit must be given to the successful execution of such simplicity in a world that swells with complexity, as it’s this dichotomy that is arguably this pieces’ greatest triumph and most prominent theme. It often mirrors the mental state of Matt, with the vast difficulty of the infinite mind often being sated by the domesticity of everyday life and the reasons to stay alive (‘for other people, for crying euphorically to The Beastie Boys’).

Watkins’ effective choreography brought with it a language that often cut to the core of the emotional turmoil better than the words ever could. At times, I felt that this linguicism earned a right to be more indulgent. The piece is quite quickly-paced, never rushed but often carrying the rhythm of a never-ending punchline – swift and raring to go onto the next thing, and I feel the movement invited a deceleration that wasn’t opted for. Sometimes, silence and stillness in the midst of the storm is more powerful than the storm itself, and the moments when the play recognised this were some of the strongest.

Despite Watkins’ making the most of the set, Simon Daw’s design had me longing for something slightly more. Such a provocative structure (a cracked, skeletal orb dissected into three pieces with large metal prods on its innards adorning the centre of the stage throughout) was visually impressive and at times used with great effect, but some of the wider apparatus beyond the larger, central fragment felt neglected and unneeded, and ultimately left one focusing more on the sets incompletion as opposed to its completing qualities within the context of the piece.

Sheffield Theatres and Touring Theatres brought an honest, raw and poignant piece to The Crucible last night. It’s bizarrely feel-good and almost family-friendly yet transcends the desire to be vainly influential and avoids being overly-saccharine. In doing so, it gives itself a universality that proves the discourse around mental health can be destigmatised – and that is some feat.

Reasons to Stay Alive is on at The Crucible Theatre, Sheffield, until the 28th September. The production then embarks on a two-month tour visiting Bristol, Huddersfield, Newcastle, Manchester, York and Leeds. For more information and tickets please visit www.ett.org.uk