It seems almost fitting for a play to possess such inconsistency when its main subject, Idi Amin, is equally as discrepant. Fortunately, just as the play spends more time lauding the eccentric and charismatic dictator to good effect, there are more positives to take from the irregularity of this piece’s theatrical prowess.

Predominantly, director Gbolahan Obisesan flourishes in parts with flashes of brilliance, demonstrating a theatrical intelligence matched only by its equally as efficient execution. The space is used well for the majority of the piece. Scenes of immense tonal complexity are mastered and steered with a remarkable sophistication. Moments of humour are all orchestrated fantastically well and unexpectedly makes comedy the pieces strongest element. However, all of this is sadly underpinned by moments of misunderstanding, and you can almost see the play begin to fall through Obisesan’s fingertips when these moments arise. 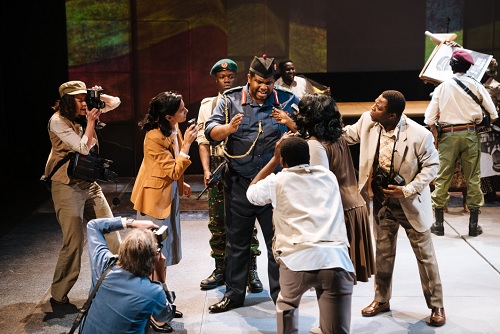 Contextually, the piece is well grasped. Historically, there is a keen understanding (alongside the relationship between reality and the fiction crafted by Giles Foden in the original novel). However, it’s in the way in which some of this is articulated that the play falls short. The severity of a dictator-led mass murder and the horror of human mutilation and torture is brought front and centre during the latter stages of the play and is expertly executed. However, the gritty presentation of bloodied cubicles within Amin’s own quarters is undermined by what immediately follows – a theatrical demonstration of Tanzania and Uganda going to war that is reminiscent of amateur dramatics. It’s incredibly challenging for an audience to seriously engage with this section when the dense tonality of the previous scene is utterly shattered by two men wrestling on a bed, carrying a symbolic significance that is almost silly in fashion.

Some risks were taken in the piece’s presentation that can be allowed for. Steve Waters’ script, though a fairly impressive work, is an exceptionally demanding one for a director as he bestows upon them the task of not only portraying the Ugandan landscape of Idi Amin’s tyrannical reign but also reflecting a global world-view that contrasts this – all set nearly half a century ago. Obisesan doesn’t fail to meet such challenges, but the adequacy of his chosen method of mastery is questionable in parts – notably in the multi-media facet that involved news reporters speaking both on screen and on-stage. The specificity of recorded speech and demanding simultaneous delivery from the reporters in question in real-time proved a task, and one that is not overcome with ease. The product of such a technique is an awkward, jarring overlapping of words that makes already clunky transitional scenes feel even more dissatisfying and ultimately unnecessary.

Daniel Portman’s portrayal of the fictitious Scottish physician Nicholas Garrigan is, although fantastically committed to, equally as questionable in ways. The immense complexity of the role, a human reflector of moral, political and emotional turmoil, is certainly done a great service in parts. However, Garragan’s neurosis is diminished by a boyish conviction and an antagonising, infantile energy – contrasting uncomfortably and ineffectively with the booming, man-boy life force of Tobi Bamtefa’s portrayal of Idi Amin.

It would be the greatest disservice of them all, however, to not take stock of this work and specifically the work of Bamfeta in this piece. Bold and brilliant, Bamfeta’s work on stage encapsulates a man enormously brass and impossibly loud. He makes the man incredibly likeable and magnetising, which is vital to the play’s success, whilst also pulling no punches in portraying the unrelenting cruelty of his delusional power complex.

This piece is the enigmatic, eccentric genius you might meet on a random night out in a random place. Plenty to say, some of remarkable intelligence and said with such admirable fancy, but a conversation that may leave you wishing that some of the theatrics were spared.