Saddle up for this imaginative and Python-esque retelling of Alexandre Dumas’s classic story at the York Theatre Royal. Performed by Exeter-based physical comedy theatre company Le Navet Bete, and directed by John Nicholson, this is an engaging and hilarious production that will make you fall in love with d’Artagnan, Athos, Porthos and Aramis all over again.

For those not familiar with the ancient fable, the plot follows young d’Artagnan of Gascony, a fierce young Frenchman who loves sword-fighting and journeys from the provinces of Paris to join the Musketeers, the elite soldiers of the King. Unfortunately for d’Artagnan, not only is his letter of introduction is stolen along the way by a secret agent known only as Milady de Winter, but when he arrives in Paris, he learns the Musketeers have been dissolved on the orders of the devious Cardinal Richelieu. 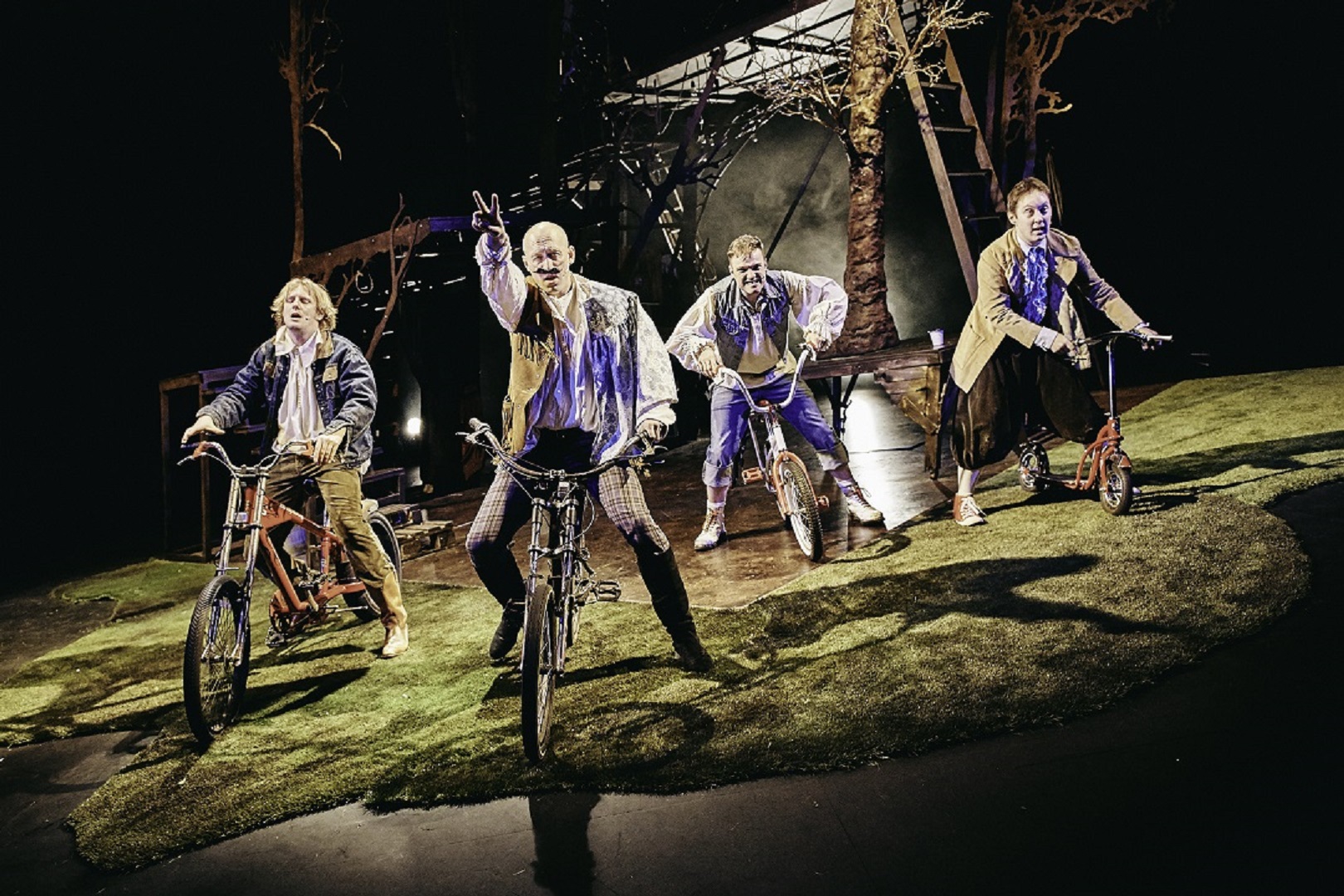 Through a series of accidents, he falls in with Athos, Porthos, and Aramis, the eponymous three musketeers, and follows a trail of intrigue and adventure that will involve them with the King and Queen of France, the Prime Minister of England, the Protestants of La Rochelle, desperate kitchen maids and kidnapped ladies-in-waiting, the femme fatale Milady de Winter, and back to the Cardinal himself.

The conceit of the performance is that this isn’t actually “The Three Musketeers” as we know it, but a story taking place in a tree house and being re-enacted by four young boys on their school holiday. This allows for all kinds of comedy asides and interaction with the audience, as well as the substituting of horses with bikes and scooters, and of wine with orange juice and Coke. Performed entirely by Dan Bianchi, Nick Bunt, Al Dunn and Matt Freemen, who multi-role as all the different characters, the production has a frenetic energy and buoyant enthusiasm that jollies along the audience and allows you to skip past any moments of the plot that don’t strictly make sense or which are difficult to follow. The performers get changed quickly on stage (with aid from a mystery lady) and rarely leave the stage, which gives the production a sense of welcome anarchy and playfulness.

The best way to describe the performance is perhaps “panto meets Monty Python”, with the latter clearly a big influence on the company. The set design is simple but effective, with different levels of the tree house complex doubling as the Royal palace, the local hostel, the streets of Paris, the Prime Minister’s garden shed, and various other locations. Similarly, the use of music and lighting to convey different scenarios was very effective. Though while it did suffer a few technical glitches on opening night, this only added to the anarchic sense of comedy and let the performers gently mock the technical crew.

Given the above influences, the production would be especially popular with younger audience members as an introduction to Dumas’s classic adventure stories, though there are a few ribald jokes that push the envelope and should be left to parents’ discretion. Moreover, if the production has a weak spot, it’s that the story is often difficult to follow, and may be confusing to those who don’t already have knowledge of the twists and turns of the novel. Though the production excises several characters from the novel and changes the ending (explicitly) this complexity of story may be unavoidable.

Overall, this is a hugely enjoyable evening for audiences young and old, and while it may not be everyone’s cup of tea (or glass of orange juice mixed with Coke) it stands in a much-loved tradition of British slapstick comedy that will be adored by many.