The King and I - Hull New Theatre

OMG! What I witnessed on Wednesday night at the Hull New Theatre has almost left me speechless.

How does one describe perfection?

As the golden, gossamer curtain opened on Rodgers and Hammerstein’s musical The King And I, it was plain to see we in the packed theatre were in for a jaw-dropping experience.

Set in 1860s Bangkok, the capital of Siam, now Thailand, the story of the widowed British schoolteacher, Anna Leonowens, had us gripped from the start, as she arrived with her young son, Louis, on a boat to start her new job, teaching the King of Siam’s many children.

The boat in question, the Chow Phya, was huge and I swear as it “sailed” on to the stage I honestly thought it was going to come right out into the audience. It was the best opening stage setting I have ever seen in my long reviewing career.

Annalene Beechey was utterly mesmerising as Anna. Her acting, singing and dancing would have done justice to a Hollywood movie – but that’s been done more than once.

The chemistry between her and the King (Darren Lee) was believable and electrifying. I actually got goosebumps before, during and after several of their scenes.

The well-known story of the willful schoolteacher and the all-powerful King of Siam was told with joy, enthusiasm, energy, passion, sadness and every other emotion I can think of, by a truly amazing cast.

Fan dancing, ballet dancing and every kind of dancing in between, kept us enthralled for almost three hours (including a short interval).

The famous songs came thick and fast throughout, all beautifully sung. We sang along to the likes of I Whistle A Happy Tune, Hello, Young Lovers, Getting To Know You, We Kiss In A Shadow, I Have Dreamed and the unforgettable, Shall We Dance? , all accompanied by music from a magnificent orchestra.

Anna’s teaching role developed into an advisory one for a King who was unsure of his country’s place in an ever-changing world. He had slaves, numerous wives and dozens of children. And everyone automatically bowed and scraped to him as he passed by.

This was anathema to the feisty English widow and her and the King clashed more than once over his country’s traditions.

When the King learns that the English think of him as a “barbarian”, he enlists Anna’s help in teaching him the “civilised” ways of that country, in lieu of a visit from a Sir Edward Ramsay (Philip Bulcock), an old admirer of Anna’s.

But there are several threads to this story. The King of Burma has presented the King of Siam with another wife, Tuptim (Jessica Gómes-NG), a young woman who is in love with a young man called Lun Tha (Ethan Le Phong).

A good chunk of the musical is, rightfully, dedicated to their predicament and this segment’s many breathtaking scenes were a joy to behold.

As for Anna, she got to know and love her pupils (we ooh-ed and ah-ed many times at the delightful children), but railed against many incidents she perceived to be injustices.

For instance, before her arrival in Siam, the King had promised her a house adjoining the palace, for her and her son to live in. He “forgot” his promise, which caused scenes of amusement for us, but anguish for her.

And all the while the chemistry between the two principals was getting stronger and stronger.

There was Anna in her huge frocks, and I mean huge; and there was the handsome King in all his finery. What’s not to like.

And when the couple - celebrating the King’s successful meeting with Sir Ramsay - finally get to strut their stuff to the tune of Shall We Dance?, my night was complete. It was the scene I had been waiting for after seeing Deborah Kerr and Yul Brynner’s unforgettable dance routine in the, now legendary, Hollywood movie of the same name.

And when the curtain came down, I wanted to sit through the whole thing again.

I’m not giving any secrets away by revealing a happy ending it ain’t.

But it was definitely a happy ending for us theatregoers who, in the words of Rodgers and Hammerstein, had witnessed “Something Wonderful”. 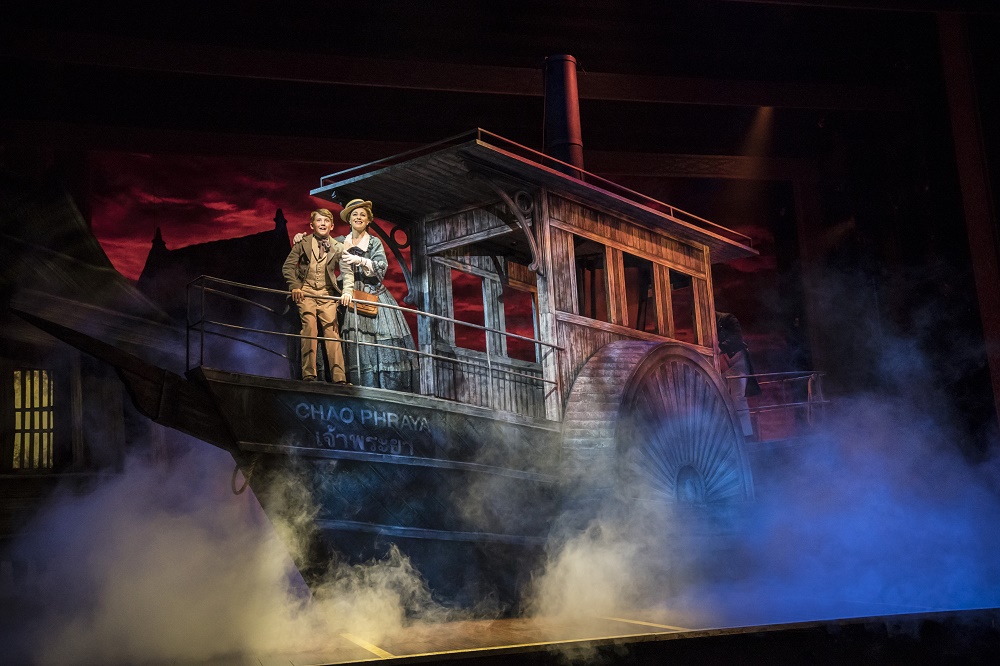