Once A Catholic - The Brindley Theatre, Runcorn

The action opens with a full cast Latin Mass led by Father Mullarkey (Joe Clarke) and the scene is well and truly set for Mary O'Malley's play set in London and based on the old saying 'Once a Catholic, always a Catholic,' and which sets out to mock the Catholicism inflicted on convent-school girls in the 1950's as they deal with their eccentric teachers, untrustworthy boys and each other.

The play is presented as a series of vignettes in a revue-sketch format with the focus, in a school where every pupil is called Mary, on three girls in the run-up to their O-Levels (precursor of today's GCSE): the naive Mary Mooney (Rachael Benfield) who causes no end of confusion when she innocently seeks clarification on the meaning of Sodom in a catechism class; the more savvy Mary Gallagher (Megan Maher) who knows how to keep on the right side of the nuns; and the streetwise Mary McGinty (Lindsey Cebelieu). 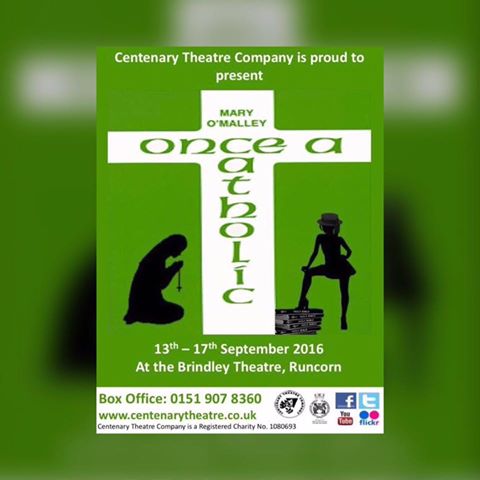 Our three Mary's are ably supported by an ensemble of Mary's (Kayleigh Finch; Beth McIntosh; Ria Hughes; Danielle Segar) who all contribute equally in the opening half of the play as we see Mother Peter (Patsy Roberts), Mother Basil (Sara Worton) and Mother Thomas Aquinas (Philippa Hunt) try to whip them into shape whilst sex and rock 'n' roll conspire to get in the way.

Throw in a nun-hating music teacher Mr Emanuelli (Michael Mullan) discovering Mooney's wonderful voice; a Protestant boyfriend Derek (Westley Clarke) for McGinty who questions if the Irish are so devout then why didn't Jesus pitch up in Dublin and turn the water into Guinness; and Catholic schoolboy Cuthbert (Michael Pirks) endeavouring to lead Gallagher astray and you can imagine the fun and games that follow under the direction of Dan Grimes.

The play was written in 1977 and its biggest challenge is that much of its satire is content specific and the intolerances it seeks to lampoon - gender; class; race; religion; equality; establishment - have very much moved on in the last 40 years. To the credit of Centenary Theatre, they acknowledge this in their programme and so whilst choosing to remain faithful to the original, they do play it very much for laughs and aim more with nostalgic affection than with barb. That said, there do sadly remain some relevant points being made even after all this time and it is also interesting to note those that were missed such as the abuse scandals.

I have to say the play is overlong at some three hours and particularly given an elderly audience, one hour and forty minutes to the interval, with another hour plus to follow, seemed too long but is perhaps reflective of the entertainment of the 1970's when there used to be an intermission in the cinema as well. I understand from a friend that the play is still celebrated in acting circles for its monologues which are often used for teaching purposes with budding thespians. I think there is a lot still right in the play but that an edit, especially of the first half, is in order and not to the detriment of the points being raised or the ensuing humour, of which there was much from this audience, and which, in spite of these observations on the play itself, must serve as the best judge of this production.

The cast as a whole performed admirably, the biggest challenge other than the length of the play being the decision to play it for full comic effect which left some characters becoming more of a caricature than others. Benfield captures her character's sexual ignorance to a tee and you feel for how misunderstood she is as a result whilst trying not to laugh too much at the same time, particularly in the closing scene; Clarke captured the Irish priest perfectly who is strict holy piety personified in the classroom when advising the girls on relationships whilst being suitably delighted at hearing a confession of mortal sin while eating sausages. I was particularly impressed with Cebelieu who perfectly captured the tough and soft emotional sides of McGinty in a well delivered role and with exquisite mannerisms throughout.

Mike Hall's set was well thought out with enough flexibility to accommodate the very quick scene changes necessary as we moved seamlessly between altar and school, bus stop and garden bench, front room and street.

Centenary Theatre Company was originally established in Warrington in 1901. The company now performs at the Brindley Theatre and with the membership being drawn from across Cheshire, Merseyside and Greater Manchester it is proud to serve both the boroughs of Warrington and Halton.  They produce two musicals and two plays each year and also give regular concert performances in aid of charitable causes. For more information www.centenaryods.co.uk

The Brindley Theatre is owned by Halton Borough Council and is the main centre for arts and entertainment for the borough of Halton which covers the twin towns of Runcorn and Widnes on either side of the River Mersey. Opened in 2004, facilities include a 400-seat theatre; 108-seat studio; gallery space; digital cinema and a bar & terrace cafe. For more information about The Brindley Theatre, forthcoming productions and to make a booking then please visit their website www.thebrindley.org.uk.