Entertaining Adaptation of a Theatrical Classic

In a year that was defined by Shakespeare it is refreshing to see the focus on one of his contemporaries if not somewhat ironic that Christopher Marlowe has finally received public accreditation for co-writing several Shakespeare plays. The Faustian myth itself has survived countless adaptations over the years and in both of its original forms it is considered somewhat wordy. Equally the question at the heart of the play – what price the human soul? – is rooted in theology and faith, both areas somewhat lacking nowadays, and so whilst director Rowan Dyer has cut the text to suit he remains true to the original language whilst trying to re-imagine a more contemporary Faustus who in this narcissistic age of navel-gazing and selfies has turned in on his own inner demons with one further question remaining: who is in control?

The play opens with Beelzebub (Geraint Williams) and Chorus (cast members) introducing us to the story before we discover Faustus (Max Pritchard) in his study contemplating how his knowledge has reached the end of every subject. His servant Wagner (Stephen Tyler-Parke) is instructed to summon two magicians, Valdes (Dominic Davies) and Cornelius (Cameron Steen). As he learns how to summon the devil, and despite the endeavours of a Good Angel (Emma Hill) and an Evil Angel (Francesca Redbindaine) to guide him, Faustus is compelled to commit to this new study whilst Wagner diverts the potential distraction of two scholars (Joseph Mitchley and Sean Hutchings). Faustus proceeds to summon the devil and Mephistopheles (Helena Jacks) appears, a representative of the devil, and through him Faustus strikes his pact, and signed in his own blood, with Lucifer (Stewart Hulme): 24 years of life with Mephistopheles serving him and the ability to use magic in any way he chooses but at the end of this period he will give his soul to Lucifer and spend the rest of his time in hell. The closing scene of the first half when Lucifer brings him face to face with the seven deadly sins – Pride (Davies); Covetousness (Jake Hawkes); Wrath (Redbindaine); Envy (Hill); Gluttony (Hutchings); Sloth (Mitchley) and Lechery (Steen) – is powerfully done and appropriately sinister yet Faustus, despite all his learning, fails to see the warning signs. 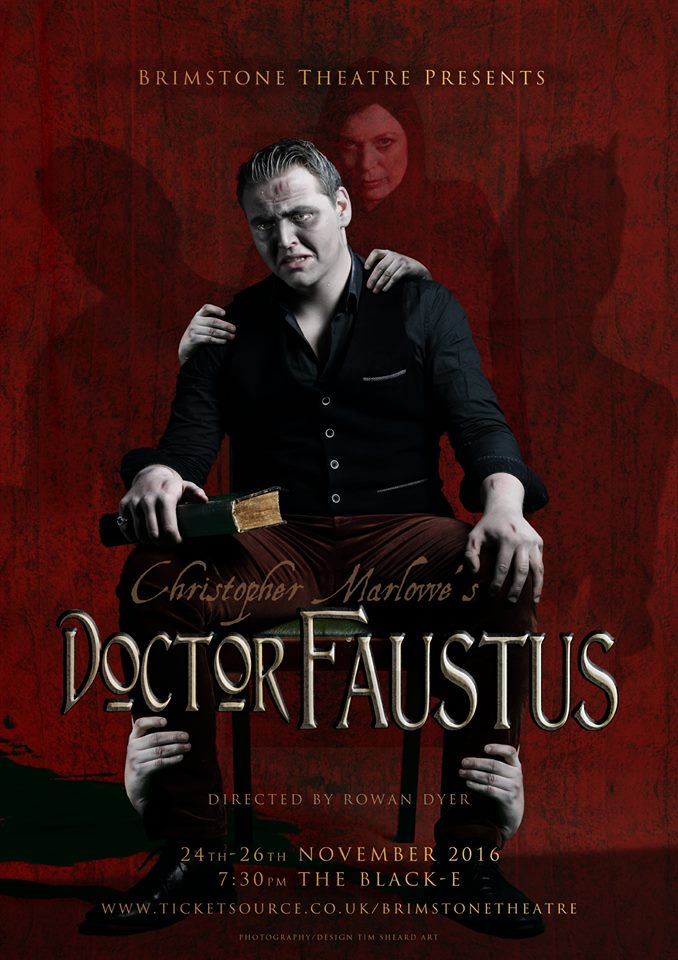 The second half sees Faustus wasting his newly acquired ‘talents’ as he focuses on fun at the expense of the Pope (Hutchings) and Cardinal Lorraine (Mitchley); the Emperor (Davies) and his Knight (Steen); and the Duke (Mitchley) and Duchess (Redbindaine). Interspersed throughout the play are a few comic interludes where Robin (Williams) and Ralph (Hawkes) show what can happen when magic falls into the wrong hands and reinforce Faustus’ continued fall from grace. The final act for Faustus is his command for Mephistopheles to bring forth Helen of Troy but the face that launched a thousand ships is handled cleverly and gently in this production, again begging the question of who we are really. With the years now passed, the clock is about to strike and amidst the protestations of the two returning scholars, who it could be said never left his side, Faustus is left with one more choice as Lucifer, Beelzebub and the chorus of devils appear for a final time.

There were strong performances from all the cast in what is a challenging piece. Pritchard’s Faustus was solid and Jacks’ Mephistopheles offered an interesting take on the character. I was particularly drawn to Williams who captured the contrasting characters of Beelzebub and Robin so well. Hulme had a majestic presence as Lucifer and the devilment in all of Steen’s characters was a perfect epitaph to his Algernon Moncrief in Brimstone’s September production of ‘The Importance of Being Earnest’. The costumes (Elaine Louise Stewart and Emma Ley) and Makeup (Ley) were superb and combined with Dyer’s musical accompaniments captured Faustus’ descent into darkness with suspenseful brilliance at every turn. The use of a platform stage and a three-tiered seating area, pleasingly almost full, and darkened stage backdrop worked well as did the occasional use of the high-level balcony and stage entrances from within the audience. I must note that the venue does need to do some work on its heating system as I had certainly imagined hell to be a lot hotter than it was in the final scenes when the actors breath was visible with every line.

Doctor Faustus performs once more at the Black-E on 26th November 2016 at 7.30pm. Tickets are available from www.ticketsource.co.uk/Brimstonetheatre as well as from News From Nowhere at 96 Bold Street, Liverpool L1 4HY.

Brimstone Theatre was set up in 2013 by a group of friends interested in exploring darker plays. Productions to date have included Antigone, A Christmas Carol and The Importance of Being Earnest. There are some exciting ideas already being considered for next year. Brimstone Theatre also have a play reading group via their Facebook page which is open to everyone and where an old favourite or something new can be explored. Why not get involved, new faces are always welcome.