GAPA - The Garrick Academy Of Performing Arts - presented this evening the one hour long shortened junior version of Stephen Sondheim's excellent Musical, Into The Woods. The GAPA is split into different groups according to age, and it was the oldest age range this evening 15 - 18. The younger ones are performing a specially written show, Babes In The Wood.

We were in the Lauriston Studio, an intimate 50-seater theatre and small stage, and as I entered I was greeted with an open-plan composite set of a single chair DSL and a green-painted leaf-patterned flat obviously representing the woods. If there had been any more set, then there simply would not have been room for the performers!

Using pre-recorded backing tracks - which were late on cue every time - the cast sung and acted their way through the rather confusing story of several fairy stories mixed cleverly together, in order for the baker and baker's wife to have a child, rescue Rapunzel, and see Cinderella married to her Prince. 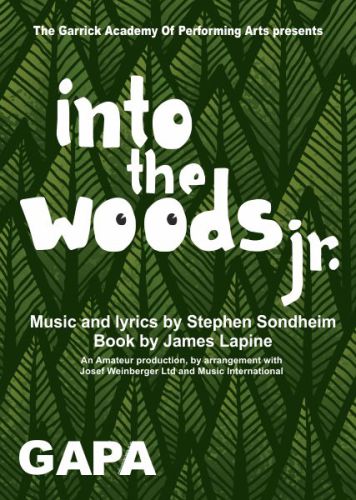 The cast of 16 (including both of their tutors / directors) took on the many multiple roles between them, but my favourite idea which worked but could have been expanded much more, was the idea of incorporating corporeal mime into the show. This basically means allowing the body to portray inanimate objects such as tables and chairs, or in this show, the tower, a set of steps, a bed etc.

Directed with a hint of surreal comedy by Dean Sumner and Rosie Hynes, this was Into the Woods as I have never seen it before! A male cow with comedic talent (Milky White played by Owen Miekle), and a 50-odd year old Lucinda in drag (yes, the course tutor and director!).

Sadly, even in such a small and intimate place, the dialogue was very quiet, and I couldn't hear the narrator at all if the music was playing at the same time. I am also uncertain as to why Sondheim's notoriously difficult score and lyrics were chosen for a group who clearly did not have the singing talent to carry it off. There were a few singers amongst the cast, but not all of them unfortunately, and when this Musical demands top quality singing this was something of a let down.

Fortunately though, the acting was good; and despite a rather slow and sluggish start, the cast picked up the pace and left us laughing at an enjoyable and entertaining hour's diversion.

The Baker was played with laconic indifference by Oliver Turner, and his wife with a sense of urgency and some lovely facial expressions by Sarah Sweeney. Emily Sibley tried her best as the Witch, but despite her putting in a sterling performance her costume (especially the cloak), and the stilted direction hindered her. A couple of really nice cameo performances came from Miranda Watkins as Cinderella, Sadie Pearson as The Wolf, and Rebecca Hanley as Red Riding Hood; but the show was utterly stolen by one song and two young actors who really made it their own, William Rafferty and Ben Hanley as the two princes.