Made In Dagenham - The Forum Theatre, Romiley

Whether, as another audience member stated, you “saw that it was on and had to come and see it”, or, like me, have never even seen the Nigel Cole-directed 2010 film starring Sally Hawkins, Bob Hoskins and Rosamund Pike but have heard great things about it - as well as the music - Richard Bean’s musical ‘Made In Dagenham’ is one of those shows that I advise you to go and see at least once.

It’s ok, you don’t have to travel to the West End (despite the good reception, its run ended in April 2015, due to poor ticket sales after opening in November 2014) as local award-winning theatre company NK Theatre Arts present the gem at Romiley Forum this week!

With music by David Arnold, lyrics by Richard Thomas, Musical Director Julian Wightman’s 5-piece band is one of the first things we see on the stage of symmetrical scaffolding that has long became the trademark foundation of the group’s rawness, strength and versatility. Leading lady Dawn Wrigley opens the show as Rita O’Grady (a mother of two and one of the Ford seatbelt machinists) alongside her on-stage husband Eddie (Joe Gallogly) - whose voice is as lovely to hear as the other talents in the cast who have solos and duets - in a Hairspray-esque bed and kitchen scene, perhaps also symbolic of Our House. The pair are well-cast and have clear chemistry, especially in their emotional and expressive scenes. 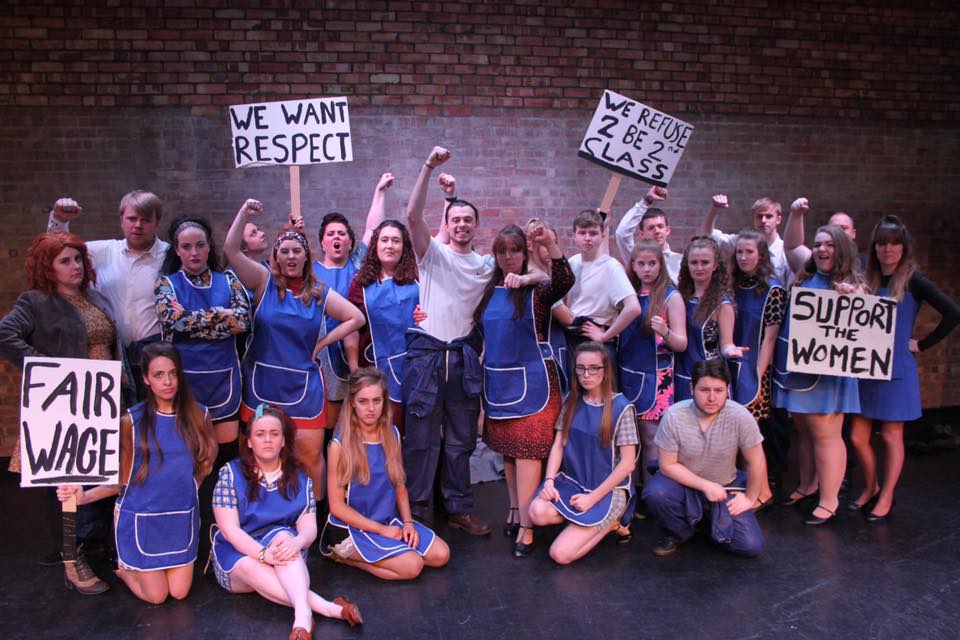 The show - following the struggle, 1968 strike and fight for equal pay by a ‘shed load’ of seamstresses, deemed ‘unskilled’ at the Ford Dagenham factory - has undertones of other musicals such as Billy Elliot and the empowering fights against the system like Calendar Girls and Pride. The story is strong, the comedy common and the original music of the 60s era moves it along with impressive solos from multiple-part-player Callum Stretton, Secretary of State for Employment and Productivity Barbara Castle (Louise Shufflebotham), Kat Bond’s Cass and young O’Grady Graham played by William Roberts during the transition either side of a scene where Rita confronts the headteacher of his school for beating him with a cane - another part of the setting of the era. After sweat, tears, raised voices and some interesting costumes, the ladies succeed in pushing through, with the help of Barbara, the Equal Pay Act in 1970.

Other notable performances come from the ladies’ supervisor Connie (Jennifer Wallis) and her partner-in-crime Union representative Monty (Jake Martin) who provide an air of innocent responsibility but fairness towards the campaign. Gemma Glenncross’s foul-mouthed Beryl draws the majority of the laughs from the audience and Charlotte Lavelle’s thigh-high-booted Sandra provides the ‘trilly’ singing that is impressive yet detracting on some occasions (probably not helped by the fact that microphones during the principal and ensemble numbers weren’t balanced meaning that the soloists were overpowered). Harold Wilson was portrayed comedically by Michael Granby complete with a Northern accent and factory boss Mr Hopkins was played well by Richard Hall and his on-stage wife Lisa by Nicola Wilkinson. The villain of the piece is American Ford boss Robert Tooley (Jake Ridgeway) with his sexist, homophobic and bigoted language and attitude. The remaining cast members were also a delight to watch but sadly I cannot list everyone.

Well-lit and well-choreographed, directed by Hannah Gorst, the cast of NK are always a pleasure to watch and their commitment and professionalism is shown, not only through their liability both on and off stage but during high-adrenaline moments like when the show was stopped just before the scene leading to the interval by the request for a “doctor in the audience”. Thankfully the affected lady was fine but the shear quick-thinking approach to having an interval early before restarting the same scene and then having a shorter break to maintain consistency is just admirable. NK is all about giving people opportunities and they thrive to do so for the cast, production team and audiences. I am always proud to witness the high quality shows that I do, put together by normal members of our communities.

Show your support with a great night out at NK Theatre Arts and Made in Dagenham at Romiley Forum until Saturday. www.nktheatrearts.co.uk