The Lover / The Dumb Waiter - The Camp and Furnace, Liverpool

Brimstone Theatre presents two contrasting, one-act, Harold Pinter plays, in the urban surrounding of the converted warehouse that is The Camp and Furnace, Liverpool. Two plays with two actors: Geraint Williams and Katie Moncaster; in one night with one director Rowan Dyer.

The first play was The Lover, written in 1962. We meet Sarah (Katie) and Richard (Geraint) who seem to be a middle-class couple living in a country house. The dialogue was stilted and sparse, quirky and tense - very in-keeping with Pinter’s style. This conventional couple seem to be comfortably off financially, but their sex life seems to be less satisfactory as the first line of the play indicates: “Is your lover coming today?” asks husband Richard. “Yes”, replies Sarah, his wife. Shockingly liberal for such a conventional couple, this would have also been true at time the play was written, even though they were the ‘swinging 60s’. However, as you would expect from a Pinter play, there’s rather more going on. 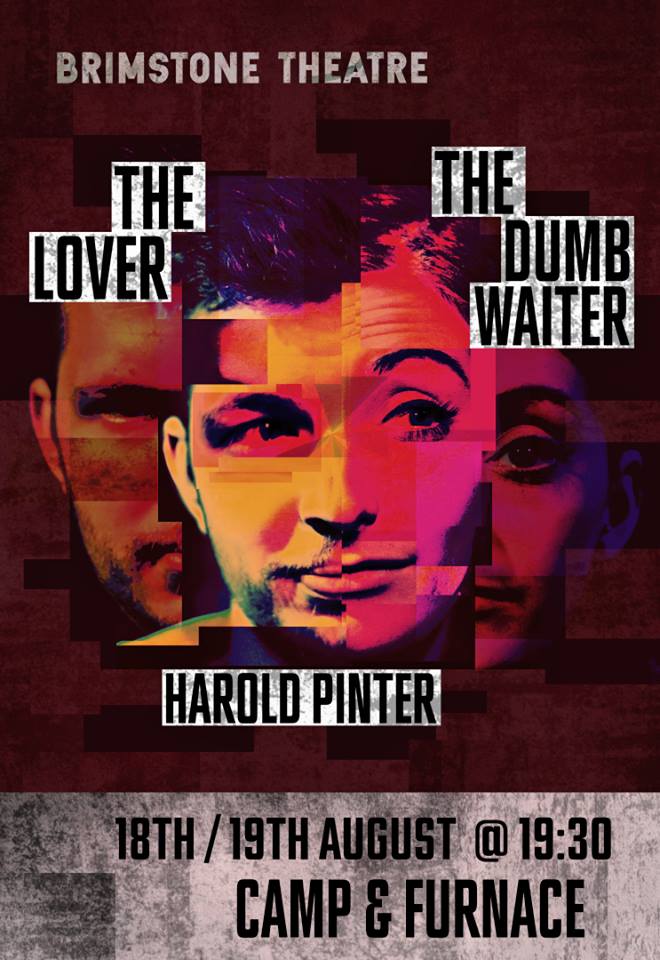 Katie and Geraint inhabited the characters of Sarah and Richard with great aplomb. Each line was delivered with purpose and intent. Their body language spoke volumes, really necessary for the Pinter’s style. The excellent staging and set design, by Nick Broadhead, really helped this too. A thoroughly engaging and enjoyable performance.

The second play was The Dumb Waiter, named after the device central to the piece. Written in 1957 is play is often considered the best of Harold Pinter’s early work. It is fall of small-talk but gives little direct information to the audience about what is actually going on. In fact, much like the characters Ben (Katie) and Gus (Geraint), we are waiting for something to happen. The dialogue centers around the seemingly trivial newspaper stories, football matches and cups of tea, but they reveal a lot about who Ben and Gus are. There is very little movement in the play and this intensifies the claustrophobia of the room - a device used frequently by Pinter. There are elements in the play that remain unanswered and seemingly unimportant or absurd, much of this centers around the messages delivered by the dumb waiter. This again is part of Pinter’s intent he has been quoted in saying that wants his audience to complete the plays, “to resolve in their own ways these irresolvable matters”.

Once again, Katie and Geraint delivered excellent performances from a play that is far more stylistic and less accessible to an audience. Both actors demonstrated a deftness in the art of characterisation, with Katie’s transformation from the sensual Sarah to the seasoned hard-man particularly delightful.

It was a wonderful evening of pure theatre and it has reawakened by schoolboy interest in the work of Harold Pinter. I highly recommend you get along tonight for the final night - you will not be disappointed.