This musical comedy tells the tale of the young starlets suave, handsome, Don Lockwood and the spoilt, screechy voiced  Lina Lamont, played confidently by Elliott Bailey and Izzi Watkins respectively. It is set at the birth of 'celebrity' and the transition from the era of silent films to the 'talkies', interwoven with the budding romance between Lockwood and Kathy Sheldon (played by Charlotte Welsby-Riley), much to Lina Lamont's dismay. 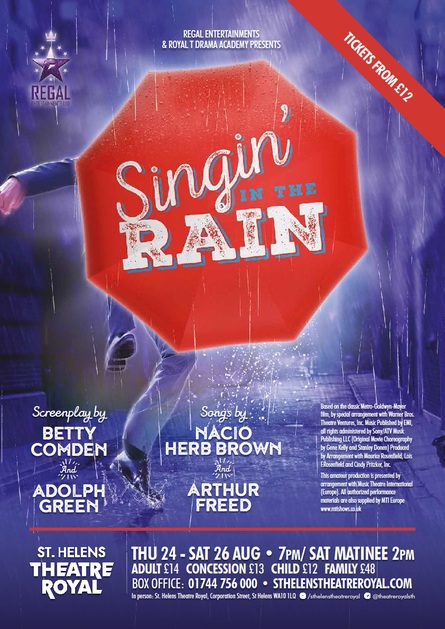 RTDA are aged between 6-19 years old and having watched their shows for a number of years, there were a number of familiar faces in the senior members of the group, this familiarity with the cast members was evident in the chemistry between the characters, ensuring a successful performance of a potentially difficult show for younger performers, with solid performances from everyone. It was also nice to see, the development of some of these performers from previous productions, many whom were in supporting roles, including Scott Copeland as the frazzled director Roscoe Dexter and with all credit to Rob Hardie, for his acting in the role of successful film producer, R.F. Simpson, Don and Lina's boss; Both providing a firm foundation for the show.

Special acknowledgement goes to the very talented younger cast members, who's acting and dancing was something to be proud of and I'll look forwards to seeing them in future productions. Plus, they were super cute!

Comedic value came in the form of Kieran Maleedy, as Cosmo Brown, Lockwood's best-friend, the dynamics between Maleedy and Bailey being one of the shows strong points. Maleedy's hilarious highlight being 'Make them laugh', supported by other cast members, which the audience certainly did.

I was surprised at the number of songs that I knew which included not only the iconic 'Singin' in the Rain', 'Good Morning' and 'Make them Laugh' with Charlotte Welsby-Riley providing the main musical focus, with her stunning vocals. Other musical mentions go to Tom Hardie, in his role as Sid Phillips, and his sidekick played by John Lewis, who sang an energetic and tuneful performance of 'Beautiful Girl', supported by a bevy of the glamorous dancers.

The choreograph throughout the show was faultless, both with the big dance numbers and the general movement on stage; with the set and costumes being of a professional standard, in particular the costumes which authentically portrayed the glitz and glamour of the late 1920s, when the show was set.

The only 'glitch' throughout the evening was the occasionally temperamental mics, which I feel was due to it being the opening night and it didn't detract from the overall enjoyment of the show.

Definitely a feel-good show, with some of our future stars of the stage! Singin' in the Rain is showing 7pm, 24th – 26th August 2017, including a 2pm matinee 26th August.