Centenary Theatre Company delve into the world of slapstick comedy and farcical drama in their latest production of “The Ladykillers” by Graham lineman and their delivery was utmost commendable with a professional quality throughout.

A group of five diverse criminals are undercover as amateur musicians in a string quintet. They meet to “rehearse” in Mrs Wilberforce’s unconventional, lopsided home and under her nose, they attempt to generate a robbery master plan. On the road to success, these men get into some very sticky situations which have hilarious consequences to the delight of the audience. 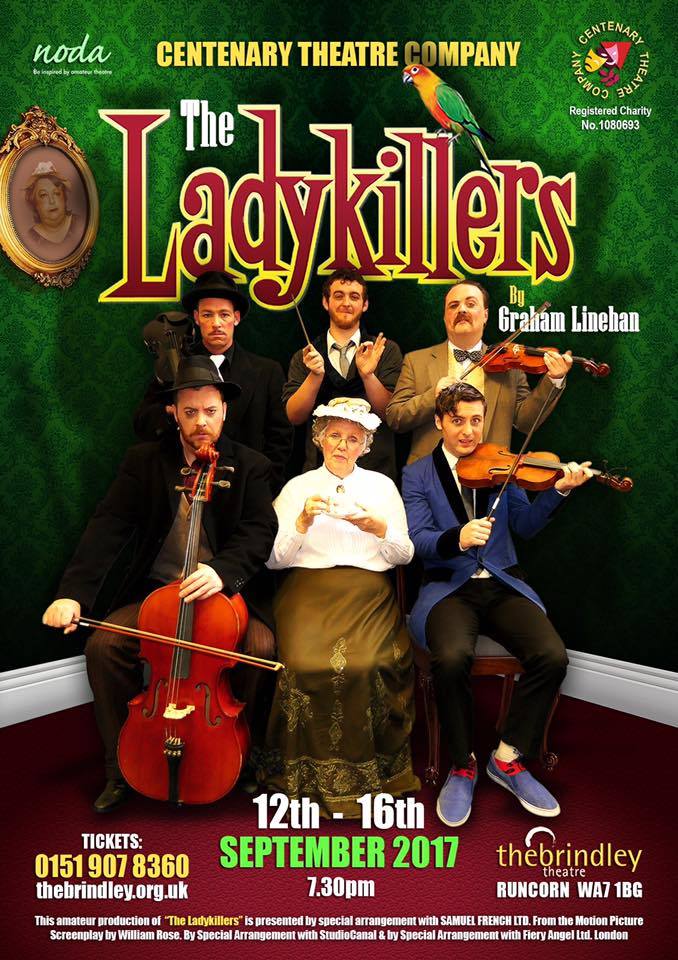 Captivating from the start, we were treated to some spectacular graphics as the curtain opened to create the illusion of a policeman walking down the street. This was mesmerising, forward thinking theatre which I love to see and just one of the many effective feelings and thoughts which were brought to the fore by the technical, sound and lighting team. This, alongside the impressive set design and construction left me consistently impressed by the clever creations from all of the production team.

Another huge celebration was the talent and skills of the performers within this cast. Professor Marcus (Tom Evans) was a strong leader and central character to this production alongside Mrs Wilberforce (Patsy Roberts) who the audience completely fell in love with. Major (Kenneth McConaghy) was excellent and made me laugh just through his fabulous tone and facial expressions as did Louis (Andrew Dunn) who was brilliantly dramatic and executed the ‘Romanian demon’ role with accuracy. Harry (Matt Orrillard) was a likeable, engaging criminal, similar to One Round (Thomas McLoughlin) whose characterisation I absolutely loved to the point where I was in stiches every time he spoke. What a fantastic set of horrendously awful criminals! I loved their versatility and ability to captivate the audience in an endearing fashion, despite their character’s morals! It was truly a pleasure to see such a strong set of accomplished male leads performing together, not forgetting the leading lady who was an equal match for these men in both talent and character. The show would not have been complete without valuable contributions from Constable MacDonald (Simon Pickup) and Mrs Wilberforce’s friends who added more vibrancy and fun to the stage.

More projection was needed from the cast on some occasions and audience reactions will also need to be accounted for within the pace of the delivery, as some jokes were drown out by laughter.  I was not sure if the parrot was supposed to be intelligible or not but the audience could not decipher these sound effects very well.

Costumes were perfect (Christine MacLean), with Evan’s weighted scarf in particular providing simple hilarity throughout. Strokes of genius were seen in the slick quality of the direction from Seb Farrell and Ria Hughes and the precision from the production team. Some noteworthy features where the knife throwing and landing, the wonky picture that moved and the lighting which created an ominous, mystery shadow every time someone knocked on the door.

A wonderful production of over the top comedy and vibrant characterisation- this show is not to be missed! A huge thank you to the Brindley Theatre for their hospitality and warm welcome but most importantly, to the Centenary Theatre Company for their terrific, humorous and utterly entertaining show. The Ladykillers continues at The Brindley Theatre, Runcorn 12th - 16th September 2017. For more information please visit https://tickets.thebrindley.org.uk/en-GB/shows/the%20ladykillers/info