As I walked into the auditorium at The George Lawton Hall in Mossley last night and took one look at the set I knew we were in for a good night; and things only got better.

"A Musical about train engines having a race on roller skates. You've got to be kidding, right?!" [J. Boerg - critic]. Starlight Express is something of a musical phenomenon which, when it first opened on London's West End, was, according to the critics, never going to last. Well, 37 years later it's still here and still going strong. It's not the same show though now, unfortunately. For some reason, best known to The Really Useful Group, they have seen fit to keep changing, rewriting, adding, subtracting, and basically reshaping the show over this time-scale. Every time I have seen the show, it has always in some way differed from the time before, and I remember with great fondness the original version. It had no parallel and why anyone thought they needed to change the show is a complete mystery to me. No-one changed Les Misérables or any other record-breaking Musicals, so why this one?

I have also had the good fortune to have directed two productions of Starlight Express, with the Rocky from my second one going straight into the same role in Bochum, so it is also a show I know very well. Or at least the basic premise and some of the songs are!

There was even a time when the original version and the first rewrite were available at the same time and the updated version was given the title The All New Starlight Express, but now there is only this one version available until they decide to bastardise it further!

The story, as is, has changed little from the original concept; except now it starts with the incongruous and unnecessary addition of a young child playing with a train set in bed, whose playing, once mum switches the lights off, becomes the show we watch, whilst the young child becomes 'Control'. From there on in the story is very similar, despite the addition of other engines. Basically we see a race between three engines, Greaseball, the reigning champion and a diesel engine; Electra, the ultra-modern and sleek new contender to the crown, and an electric engine; and finally Rusty, the out-dated and cumbersome steam engine. Love interest and rivalry is provided by Dinah, the dining-car, and Pearl, the First Class carriage. This is a fairy story, and as we all know, fairy stories have to end happily, which it does. Steam wins, and Rusty gets his girl!

So back to Mossley!

The set was extremely well designed. On the actual stage itself we were given the rail depot with three sheds represented by arches and rail tracks leading from them. The outer two rail tracks continuing via ramps onto a rectangular area of matted flooring in the auditorium, thus extending the stage into a thrust formation and giving the cast plenty of room to manoeuvre in their skates for the races and group choreography.

The races themselves were extended even further by the cast skating round the back of the main body of the auditorium. It was a very good set and worked well. However, I did have one thought which for me would have improved it slightly, and that was that I would have liked to have seen the three shed doors open, and the trains appear through them not coming in from the wings all the time. My companion last night also had a thought that he would have liked to have seen the race once it went behind us and out of view. This would have necessitated a camera being set up behind the seating, and a projection screen on the side of the stage. But basically we were both nit-picking. What you had worked fine and was really very good. 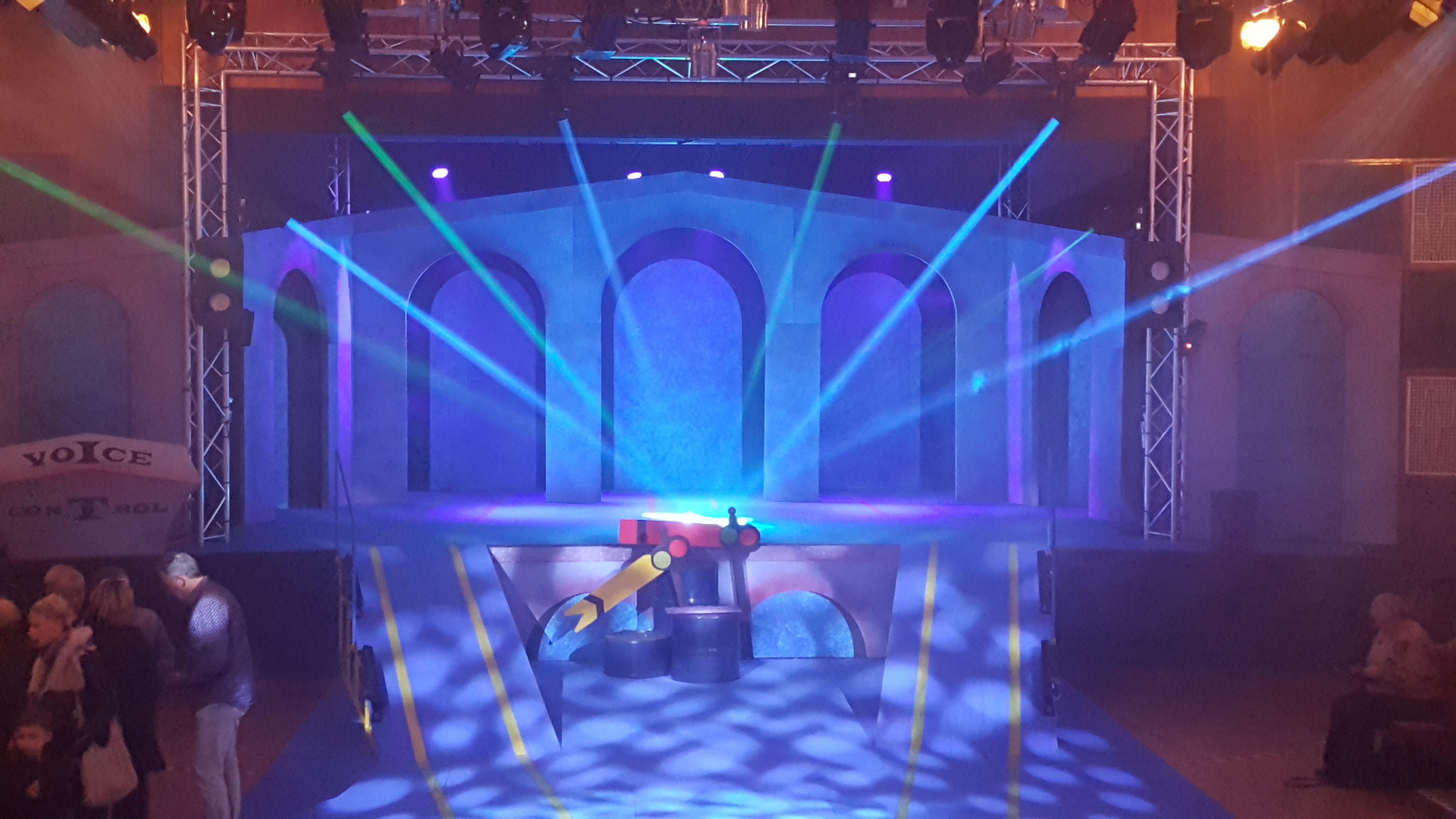 And before I move on to the actual performances, let me stay with the technical side of things just for a second. The lighting design was superb. For an amateur society and such an unimpressive venue, your LX capacity rivals any professional outfit. I loved the design. It was well-thought through. Imaginative, but also using some of the tricks used in other productions - but when something works so well, why try and change it?! [Eh? Messrs. Mackintosh, Lloyd-Webber et al!?] It was such a pity that you were out on your cues so many times last night! One or two can be forgiven but so many were out of sync; sorry!

The band was extremely good, creating the right sounds and styles required for each of the numbers, but some of the songs were taken just a little too fast for me. Poppa's Blues for example was not Blues at all taken at the speed it was last night! And the sound was, just a couple of times a little loud. But again, I am nit-picking!

The costumes were all wonderful. Not exact carbon copies of the professional shows, but mostly very close. The face make-up was generally quite good; but on two particular characters it really didn't work for me at all. I hated the clown face on Dustin, and the strange lines on Poppa.

The acting from all the cast was absolutely fantastic. Not one weak passenger amongst you. The singing was generally excellent, but some obviously a little more confident and comfortable than others. It was the skating that really let everyone down. Yes, I know that most of the cast were not able to skate beforehand, and all have had lessons before and during rehearsals, and as such I can only applaud you all for this level of commitment and dedication. However, I could see the fear on some of your faces from time to time when you were uncomfortable with a particular manoeuvre, and some were still shaky and unsteady with cast falling several times.

You are a group of young performers; many of whom are aspiring professionals, or may even be involved in the profession already, and so are aware of just exactly how demanding, gruelling and heartless it { I? } can be. I therefore take into consideration both the fact that this production is a youth theatre and an amateur show, and say that I think it really quite remarkable that you were able to find so many members who were willing to go to such lengths in order to put this show on, and again, it may seem like I am nit-picking; but the lack of quality skating just took the gilt off the edge of this show, which would otherwise have been utterly top-notch.

Control (Violet Winterbottom) played her part with power and energy. Bopping up and down from her control box DSR. It's a very odd role in this Musical, and in the original version was simply a VO, so it definitely needed some punch and character in order to make it come alive, and you certainly did that. Why though you were given direction to say it in an American accent I have no idea. You were a young English girl in bed...!

Rusty (Jake Hankey) was immensely likeable and we really were going on the journey with you. A lovely interpretation. And both Greaseball (Josh Hankey} and Electra {Tom Kehoe} gave excellent interpretations of their respective roles. But for me the absolute stars of last night's show were four young ladies who acted, sang and danced their way through the show shining just as bright as any West End star has done before them. Pearl {Emily Lyons}, Dinah {Emily Clarke}, Buffy {Molly France}, and Duvay {Rhona Butler}. [Why, oh why this was ever changed from Belle and her beautiful solo cut from the show I'll never know!!]

Together they acted, sang and danced their way through several numbers but it was Dinah's rendition of U.N.C.O.U.P.L.E.D. which stole the show for me!

Other noteworthy performances came from Poppa {Cameron Hall}, Hip Hopper 1 {Megan McKinley}, and a forever smiling young man who was so obviously enjoying every second of it, Dustin, {Ricardo Atherton}.

But as I said earlier, the entire cast was indeed extremely good, and all worked so extremely well together.

The directing, by Gary Jones-McCaw, was solid and sensible. All the characterisations were well defined and the relationships and status between each clear. Mr. Jones-McCaw was also responsible for the choreography. This was somewhat minimalistic and / or simplistic. Obviously due to the fact that you were dealing with a cast that had 8 wheels unnaturally placed under their feet and so it had to be simple and effective. I think most of the time this worked. There was only a couple of times which I felt were a big eggy.

I did like and appreciate the idea of allowing Control to don skates and appear in the Mega-Mix finale; and I also very much warmed to allowing the cast to come out after the show in costume to have photos and mingle with the leaving audience. Something which goes against every rule of theatre practice under normal circumstances, but since this production was so up-close-and-personal, and majority of the audience were youngsters, family and friends, it was a nice touch.

It was a very long time since I was last in Mossley or involved with any of their productions. In fact looking back in my diary I find that the last time was 'Sugar' in 1993! Which is undoubtedly before any of last night's cast were even born.

It was a strong and extremely worthy production of which every single one involved should be extremely proud. I thoroughly enjoyed watching the show last night - despite all the nit-picking! - And was impressed by both the technical and artistic standard on display. You ARE the Starlight and the power's within you!