The East Cheshires Musical Theatre Company are in fine voice as they open for a week long run of The Witches of Eastwick at the Altrincham Garrick. Yet another fantastic production in what has been a superb year for the Garrick to date.

Three ‘Witches’ frustrated and bored by their mundane lives in the town of Eastwick, with a shared longing and desire for ‘all manner of man in one man’ think all their dreams will come true in the form of a charismatic stranger, a devil-like character, Darryl Van Horne (Matt Mears).

Seducing each woman in turn, Darryl teaches them how to further expand the powers locked within, whilst their new unorthodox lifestyle scandalizes the town.

As these powers become more sinister and events spiral out of control, the women come to realise that Darryl’s influence is corrupting everyone he comes into contact with and resolve to use their new-found strength to exile him from their lives.

The Witches, Alexandra (Alexandra Howarth), Jane (Andrea Sutcliffe) and Sukie (Kimberley Edge) form a formidable partnership on stage and are more than a match for any man. All three have great voices which blend together throughout the show. All three succumb to the advances of Mears as Van Horne during the first act in various ways including around a potter’s wheel.

Prim and proper Felicia (Krystina Hood) the self-appointed first lady of Eastwick and her hen pecked husband Clyde (John Hillard) both give strong performances which come to an end in a scene any soap opera would be proud of.

One of the stars of this production is Gabriel Walker whos portrayal of Michael is played without fault. His transition from geeky embarrassed love struck teenager to fully fledged man with the help of Van Horne is a joy to watch. Even a wardrobe malfunction of epic proportions did not put Walker off during the energetic ‘Dance With the Devil’ number.

But the star of this show has to be Mears as Van Horne, one played by Earl Carpenter on the West End stage. His persona on stage from the very first minute is one of dominance and dare we say sexiness! With vocals on point and acting to match we predict there are great things ahead for this young man.

The Witches of Eastwick has all it says it will, romance, comedy and spectacle. A simple but effective set and lighting to match have no trouble recreating the various scenes throughout the show. Add to this a fantastic band under the direction of Daniel McDwyer and you have a show that is not to be missed.

With no major shows on at the Palace or Opera House in town this week there is no excuse not to visit this production. With performances till Saturday click HERE to book now. 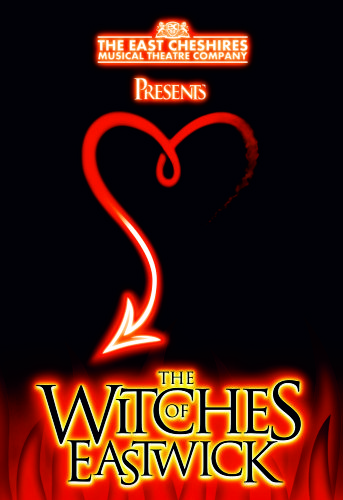