A gang of pensioners, a crate of beer and a cheap all-inclusive package in Whitby with dance and entertainment thrown in to provide an evening of fun and possibly unexpected romance is how Rainhill Garrick Society billed this production and they didn't let us down.

Set in the 1980's, the play tells the story of a group of friends who holiday together each year for a week of drinking, dancing and living it up. This year is slightly different for Pat (Judith Martindale) who is holidaying for the first time since the death of her husband some nine months before. Despite a mixed view from the accompanying party on how she should conduct herself, she is determined to have a good time. When they arrive at the hotel there is an immediate connection between her and the entertainment manager, Phil (Gerald Walker) and their twilight romance unravels through a series of short scenes. Moving to and fro between strong humour and extreme poignancy, the play provides a lot for us to reflect on.

The play commences with the cast arriving to get on the bus to a chorus of Glenn Miller. My initial concern that there were too many characters to get to know so quickly was dispelled by the great vignette structure of Mike Harding's script and its delivery by the cast. 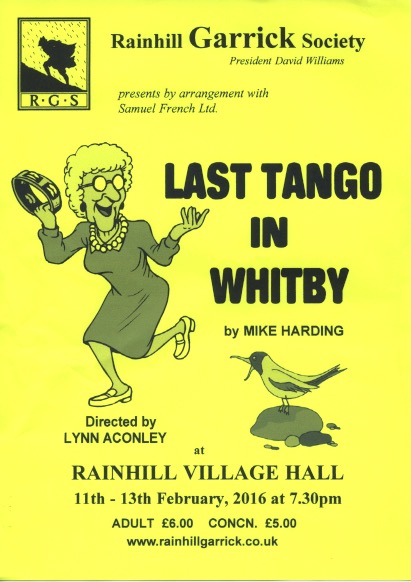 There was plenty of innuendo and double entendre from Jimmy (Rob Williams) ably supported by his wife Joan (Gill Bourke). Kathleen (Rosetta Parker), Maureen (Margaret Brown) and Jessie (Betty Swift) were an able trio of northern 'witches' observing and judging every act and behaviour with Swift's clever comic performance finally allowing her to see the light whilst Parker grumpily danced a last Tango with Phil's dumped wife and dancing partner Edna (Jo Webster). Henry (George Lowe) was the perfect bore we all know and endeavour to avoid.

Standout performances though were the geriatric twins and the two waitresses (both superbly played by Linda Saavedra and Tracey Duffy) who absolutely nailed it for me and the rest of the audience judging by the laughter and impromptu applause that they deservedly received throughout. More importantly they were both clearly enjoying themselves.

A special mention must go to Gino/John (Richard Parker) and all the other cameo roles he delivered on the night - good timing and stage presence. One to watch out for.

There was a full house at Rainhill Village Hall - the price of being a successful amateur dramatic group - so it was a shame that on occasions some of the cast were difficult to hear. I'm not a fan of microphones so some stronger voice throwing is called for.

What holds this play together and keeps driving it forward seamlessly are the dance scenes which were played out for great comedic effect. It takes great skill and choreography to be able to coordinate a cast to get the moves so purposefully wrong which is to the credit of the dance coaches (Steve Kelly and Val Scothern) as well as the stage manager (Graham Swift) to pull off the split-second timing for the numerous costume changes throughout.

There is a recently re-discovered Elizabethan tradition of ending plays with a dance routine, and whether an intentional homage or not, this play is worth seeing just for the way they go out with a bang (no pun intended!)

Last Tango in Whitby is their 224th production and plays at Rainhill Village Hall on Friday 12th and Saturday 13th February 2016, both at 7.30pm.

Tickets are available on the door or can be secured by calling 01744 813 429. For further information on this and forthcoming productions visit their website http://rainhillgarrick.co.uk/