There cannot surely be a more iconic tragic-romantic film than Brief Encounter. Filmed and released in the mid 1940s, but set in 1939, and adapted from the stage play by Noel Coward, 'Still Life', the film follows the doomed love affair of a bored suburban housewife and a GP, after a chance meeting on a railway platform cafe.

Of course the film is most definitely a period piece now... nothing more than a novelty and reminder of a time and place when self-repression and moral sacrifice made sense. That doesn't however, mean that the story should be trivialised and made into some kind of light-hearted comedy.

Enter Emma Rice, who has done just that. It was her adaptation that Altrincham Garrick chose to perform, and although it has had some success both on the London stage (Kneehigh Theatre Company) and Studio 54 in New York (Roundabout Theatre Company), it has turned Coward's serious intentions into what I can only really describe as a 'Gentle Sex Comedy Musical'.

In retrospect then, it is the script itself that I have problems with, more than anything. I left the theatre last night not really knowing how to react to what I had just witnessed, but knew that I didn't like it. It was only after sleeping on what I I had seen, did I realise that in actual fact, the acting was actually extremely good when taken in context of what they were given to work with. - The script.

The script takes ideas from both the stage play and film, including the boating lake scene where the couple take out a rowing boat, Here, however, both slip and get wet, having to use large towels to cover their modesty whilst taking off their wet clothes to dry them. It is during this rather snug little romantic tryst that they declare their love for each other. To add to the mostly-taken-directly-from-the-film-dialogue, (perhaps Rice thought it rather mundane and minimalistic - but that was the whole idea!), several songs of Noel Coward have been added and are sung by the cast to exemplify their feelings. The songs are well chosen and do indeed fit the moods of the characters, but rather than the songs being background or given less significance as they would in a 'play with music', these were given the full Musical Theatre treatment. The cast coming on as chorus, singing in harmonies and doing chorus movements behind the principals. Two of the cast even picking up musical instruments so that the on stage pianist was given a little help with filling out the sound with ukulele-banjo and flute. 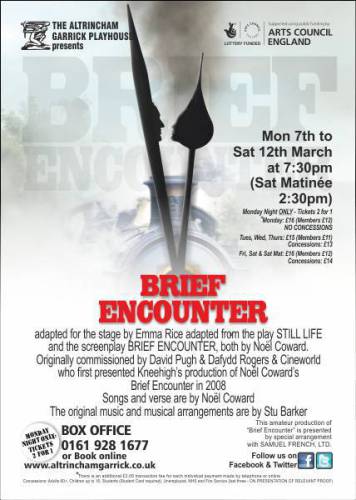 The music played throughout was either excerpts from Rachmaninov's 2nd piano concerto (as it is in the film), or songs composed by Noel Coward.

The sex comedy part of my rationale comes in the form of the two other couples who get a lot of the limelight and attention in this adaptation. In the film they are minor characters of little significance, however here, in the first half at least, all three couples are given equal stage time, thus diminishing the importance and significance of the protagonists' dalliances. The first of these other couples is the Station Master, Albert and the Station Cafe Proprietress, Myrtle. (Graham Simmonds and Alison Davis). Their scandalous and overt courtship being played totally for laughs fits in nicely with Musical Comedy, and the bottom-slapping, naked torsos, and innuendos fit only for a Carry On film. They were all nicely done though by two rather likeable caricatures. Writing of innuendos, then, I come to the third couple of the play, Stanley, a young railway employee, and Beryl, a waitress at the cafe. (Dillon Burgess and Fiona Primrose). It was the line that Beryl says to an expectant Stanley about her rock buns whilst pushing her breasts up that finally made me balk. Both Burgess and Primrose {that sounds like a double-act already!} were in fine form. Both acted well and proved to be more than proficient singers too. I just felt that the whole retelling and script was at odds with Coward's original intent. - Especially when the same two performers become Laura's two children.

The two ill-fated romantics Alec, MD, and Laura were played very convincingly and with absolutely the correct style and mannerisms of the period. They played it truthfully and sincerely. They did everything in their power to try and recapture the feeling and aura of the era, despite everything around them jarring with it. Alec, played here with restrained sincerity by Paul Wilson, was every inch the tragic-romantic hero. Tall, gentlemanly, and with an extremely personable stage presence he was immensely watchable. His story though, at least in this script, was pushed to the bottom of the pile. Laura, the housewife who visits the cinema for escapism and excitement after each shopping trip, was played here by Sarah Roberts. It was her magnificent portrayal that shone through the whole play. Real, heartfelt and quite gutsy, she spent much of the second act crying too. Her demeanour and behaviour being so absolutely spot-on period, and the only one in all the cast who, for me at least, spoke with a true 1940s voice.

The set design, and its usage I found very odd. We are told that the whole play is set inside a disused cinema. I am uncertain why. I understand the idea of a cinema of course, but bringing Laura on at the beginning to take the cloths off the tables and chairs as if it were some kind of dream retelling just didn't work for me. Further, I am also uncertain of why there were tables, chairs, a counter and shop goods in a disused cinema!

The set was in two distinct halves. The rear half of the stage was indeed beautifully designed and looked lovely. It was the auditorium of a cinema (theatre). You could see raked stalls seating, a lovely balcony with seating beyond, and in front of all this was the pianist, Steven Mercer, seated centre stage facing forward. - So that he would actually have had his back to the 'audience' of the 'cinema'. This all looked real, and had a genuine feel to it. However, the front part of the stage felt like it was designed by a different person. Rather than going for realism, we were given a more Brechtian interpretation of stage design. Three tables and chairs, with one or two extras were used for every scene, from the cafe, Laura's home, Alec's flat, the boating lake and goodness knows what else. Dividing these two from each other was a thin gauze curtain, and a step. The step became the station platform and 'outside'. And when it came to perform a scene in the cinema, the chairs were used once again facing forward with the cast watching the film somewhere above the audience's heads, whilst the remaining two cast members played the scene on this step. It was a silent film with piano accompaniment; which even in 1939, when talkies were the height of fashion and cinema was going through a radical period of innovation, seemed a little out of place. My parents were born in 1929 and 1933 and they were never exposed to the silent film in mainstream cinemas as children.

Looking at the period that this play was set, I loved the attention to certain details such as the cups and saucers, and the various dishes for the cakes in the cafe; the suitcases and cinematic reliquiae either side of the stage etc, and indeed, majority of the costumes, especially the uniforms, were excellent. However, there should have been liquid in all the vessels needing it. You had real buns, real food, and empty teacups and glasses! That simply didn't work. And considering that the action of this play takes place over the course of several weeks, seeing the characters on a different day each time they enter, then they should have been wearing a different costume each time. They all wore the same one.

I found the directing, by Barry Purves, unfocused and stylistically mixed. The play took a long time to warm up, perhaps because it was the first night - and indeed, some were a little unsure of lines or moves (a nice ad lib from Davis!).But my main issue was with the style of the play in general. Purves chose quite rightly to have the protagonists real and believable, and yet they were acting next to characters which would not have been out of place in either Mary Poppins or No Sex Please We're British! Some movements were very stylised (such as chorus actions during songs and moments of high tension), and others were totally naturalistic; whilst others came in the form of Hyacinth Bouquet style comedy. All of this softened and defocused the tragic element of the story, and so, when at the end, true to the film, Alec puts his hand on Laura's shoulder as his final goodbye, unable to look at her as he walks out to the train, it is not this that we are focusing on, but rather the comedic over-bearing presence of Laura's friend, the intruder to the scene. And even when Laura decides to commit suicide, the focus of this is still diffused by Laura's friend at the cafe bar. The film of course, solves this problem with long close-ups and voice-overs which the theatre cannot do, and even the very end when Laura tells her husband, 'I meant to do it, I really did, but I wasn't brave enough. I would like to be able to say that it was the thought of you and the children that prevented me but it wasn't', was reduced in the stage version to nothing more than a look, a cry, and a falling on the floor without explanation, meaning that only those old enough or cinematically au fait enough to know the film would truly understand the ending.

My overall impression of the production can be summed up rather succinctly I feel by the following sentence. A very brave and well-acted effort on the part of all the cast struggling with poor material.