It is always difficult to have an open mind with a show you have a preconception of having performing in it twice yourself, but I tried with Altrincham Garrick’s latest offering of 42nd Street and really enjoyed what I saw.

Having also performed in the show at that very same theatre in the previous production by Trafford Margaretians, it was hard to side-step the impression that there were quite a few changes to the script, and indeed a few of the songs (showstopper ‘I Only Have Eyes For You’ from the film Dames, replacing ‘I Know Now’ at the end of the bar scene). Nonetheless, it is the whole experience that makes a show and with the demand for strong dancing - particularly tap - and the portrayal of vanity, despair, love, aspiration and ambition, the show offered these in bundles, mainly through talents of students from Chester’s The Hammond School, as well as society regulars.

Following the insight of renown theatre director Julian Marsh (Charlie Tomlinson), the show begins at the ‘audition tap’ where we meet choreographer Andy Lee (Michael Byers) and a group of enthusiastic and ambitious young ‘chorines’ each wanting to get into Marsh’s latest show ‘Pretty Lady’, written by duo Maggie Smith (Laura Chandler) and Bert Barry (Paul Wilson) and funded by Kiddie Car tycoon Abner Dillon (Richard Sails), who is also sugar daddy to ‘has been’ leading lady Dorothy Brock (Vicki Clarkson) who still has feelings for her vaudeville partner Pat Denning (Richard Ross).

Late-comer to the audition is ‘young and healthy’ Peggy Sawyer (Megan-Hollie Robertson) of Allen Town Pennsylvania who bumps in to leading man and ‘one of Broadway’s better juvenile tenors’ Billy Lawlor (Sam Jones) who reassures her that she will gain a place in the show, but Andy won’t ‘audition [her] unless he’s got no choice’. Off they go with a duet of singing and dancing before Mr Marsh arrives at the theatre to welcome the successful chorus members of his show. He realises he is ‘shy one girl’ and so turns to ‘the first girl [he] meets on the street’ in the form of Peggy. Later in the show Dorothy accidently trips over after being ‘pushed’ by Peggy during a dance routine and Marsh causing Pretty Lady to close. The female supporting cast of ‘Anytime Annie’ Reilly (Anysia Bramante-Wareing), Gladys (Victoria Davies), Winnie (Shannon Platt) and Phyllis (Stephanie Haighton) propose that talented newcomer Peggy be considered to fill the leading part and, with no other option, he agrees, forcing her to learn the whole show in a matter of hours.

With comedy playing a big part throughout the show, the strongest musical parts of the show, as well as some of the solos, have to be the group vocal pieces with a welcomed section during ‘Dames’ from David Burilin. Choreography from Deborah Norris and Jessica Hill (who also plays Ethel) is well thought out and most matches that of the original and subsequents but it was not always in sync, when it was it became the highlights of the show.

With a beautiful art deco set, in which MD Simon Murray’s 10-piece band were encased, was nice even when closed to provide an indoor setting for the dressing room and scenes but I did miss the iconic steps and railway bridge which I think could have still been included above the band. The whole stage was utilised as were the doors around the auditorium which occasionally detracts from the scenes on stage.

As the show follows the progress and transitions of a Broadway show from rehearsal to theatre before theatre to theatre, you can’t fail to mention the likes of Stage Manager Mac (Elliot Horler) and Jack (Jack Hales) - not a double act! - Who both double up as dancers (Elliot also taking on the role of a Thug and Doctor) and contribute to the ‘backstage’ sense.

Directed by the theatre’s figurehead Creative Director Paul Kerryson, overall a good show that ‘should’ be a sell out, so you better get your tickets for at least one of the remaining 7 performances of its run, finishing with a matinee on Sunday 7th June.  Tickets can be booked HERE! 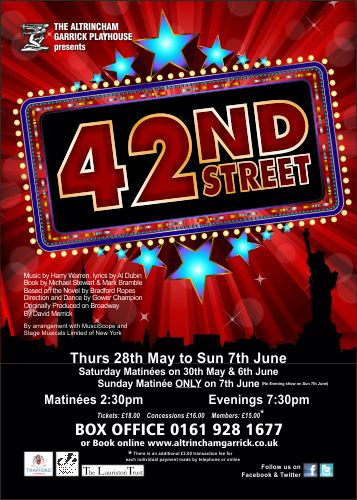